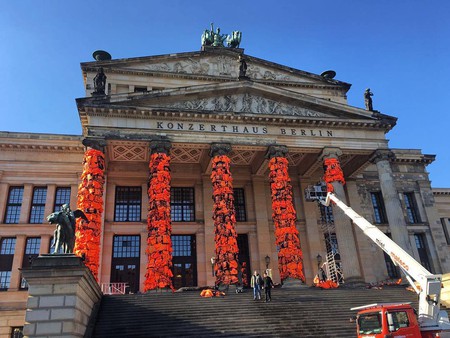 Ai Weiwei is infamous for letting his actions speak louder than his words, which seems fitting for his position as a contemporary artist and activist. Known for being unapologetic and outspoken, Ai Weiwei’s undisguised and masterful provocations aren’t always appreciated by his contemporaries: he was once held in Bejing for 81 days under the charge ‘economic crime,’ reminiscent of something out of a Nabokov novel. Regardless of his sometimes unappreciated reception, Ai Weiwei remains a paramount iconoclast who infuses his incendiary art with irrefutable politics. His exhibitions often rattle the very core of people’s insights and implore us to evaluate societal pitfalls, relationships, and impacts with more awareness. In a recent interview with The Guardian, Ai Weiwei talks about art and humanism.”I am not born an artist, I am born a human. I care about human conditions rather than the opinions. I have no choice.” It’s no wonder this incredible human has has been driven to dissect the refugee crisis with his art. 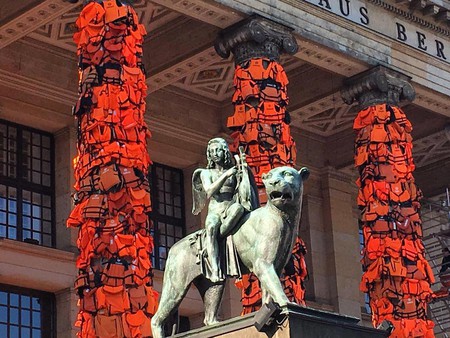 This isn’t the first time Ai Weiwei has curated an installation in the face of the refugee crisis. In January, he posed as the dead infant washed up on the shore in Greece, Alan Kurdi, in an attempt to recreate the now legendary photo that sent shockwaves all across the world. He also recently cancelled his show scheduled to be in Copenhagen after they released their controversial policies about seizing asylum seekers’ valuables and postponing families’ reintegrations.

This time Ai Weiwei has collected over 14,000 life jackets and has tied them together, draping them up and down the columns of the Berlin Konzerthaus. The jackets are coming from Lesbos or Lesvos, a Greek island that acts as a middle point for those Syrian refugees fleeing from their homeland on their way to Europe. The island was first made popular by its abundance in the Homeric epics. Now it has become the middle ground in a desperate plight to jump ship, acting as both a beacon of hope and a symbol of precariousness.

These life jackets demonstrate the amount of lives that are being risked to find peace; so many lives have been lost in an attempt to reach safe ground. Ai Weiwei showcases his inexorable belief in human rights through his installation. The orange vests, which he received from the Lesbos authorities. stand brightly in the center of Berlin. It only took one night for his installation fully to take shape. 14,000 life jackets are now covering the pillars of this concert house. The timing overlaps that of the Berlinale, perhaps to insinuate it’s not the time to become insular with our attention. Even when people try to distance themselves from the world’s problems, it becomes clear that it’s not as far away as we think. The problems of the world cannot be ignored and Ai Weiwei is hellbent on making sure we won’t. 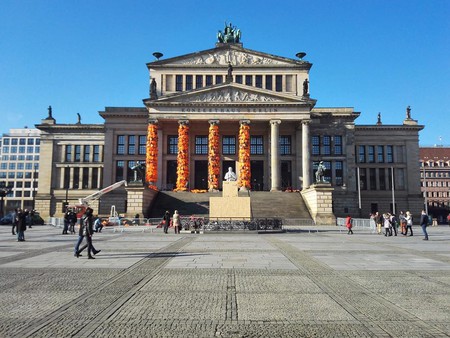