A History Of Spandau Citadel In 1 Minute 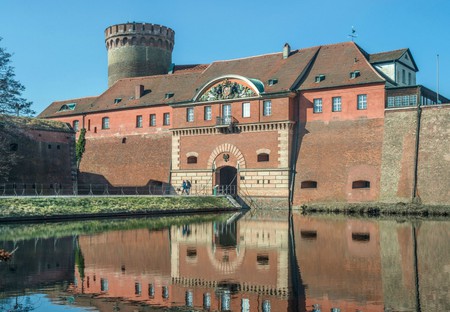 On a tiny island where the Havel and Spree rivers meet, this citadel was built on the site of a medieval castle, and developed over three and a half decades from 1559 to 1594 by architect Francesco Chiaramella de Gandino. The fortress was created for the protection of Spandau, which has since become part of Berlin.

As a defensive outpost the building is exemplary; its bastion system, for instance, lacks any blind spots where enemies can congregate, hidden from view. The first attack on the citadel came from the Swedes in 1675, and it was almost entirely destroyed by Napoleon’s forces in 1806. Extensive restoration took place following this attack.

In the 1930s the citadel was used as a military research centre, where German forces tested the effects of nerve gas. By the end of World War II, it had become a Nazi fortification. Even in the 20th century, the citadel’s clever design has made it difficult to capture. The Soviets ultimately laid siege to it by surrounding the buildings completely with troops, in order to prevent escape.

Post-war, the British briefly took control, and used the castle as a state prison for Prussian inmates. Nazi prisoners were held elsewhere in Spandau.

Today, the citadel is a well-preserved monument of Renaissance architecture where visitors can admire more than 900 years of building mastery. Since the fall of the Berlin Wall in 1989, the citadel has blossomed into a cultural centre, with theatre, music and exhibitions on offer to the public.

Come and tour the site, enjoy concerts with friends, and marvel at this icon of Spandau’s history.