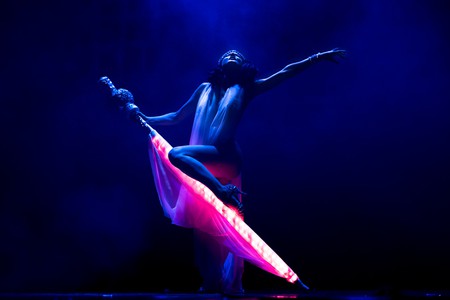 In a metropolis like Berlin, there is a scene for everything, and that includes everything your wildest imagination could ever think up. Burlesque falls into this category, and the Berlin burlesque community is one of the most thriving in Europe. It is also one of the most loved communities of the so-called ‘glitter tribe’ worldwide. 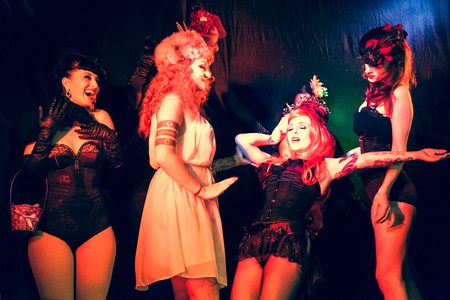 Simply put, burlesque is a performative art form that uses parody and exaggeration to mock something; its origins date back to the 17th century, but today it is mainly seen as a variety show that involves striptease and comedy, among other things. Its revival has been brought to the mainstream by artists such as Dita von Teese, but its forms are extremely varied. If you think burlesque has anything to do with the film with Cher and Christina Aguilera, please think again – burlesque is much more than that.

From the point of view of the performers, the Berlin burlesque community is well known for its warmth and openness towards artists from all over the world, both as guests and residents. The past few years have seen the arrival of performers from the likes of Japan, Australia, Switzerland, Canada, Italy, the United States, New Zealand, Russia, Britain and so on, besides its home-grown artists.

In the old days, Berlin was the destination of a mass exodus of artists, as an El Dorado of debauchery, promises of cheap rent, and an easygoinglifestyle. Burlesque and boylesque performers have been no exception.

And by the way, yes boylesque is a thing! It is, simply put, male and/or queer burlesque. 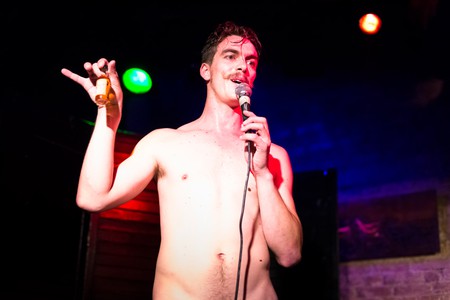 However, the burlesque scene and industry remains mainly dominated by women; a large portion of audience members as well as event promoters in Berlin (and everywhere else for that matter) are female.

‘Is it bitchy?’ many of you ask; ‘Are there any cat fights?’ No (*raising eyes to the sky*), there are no cat fights, and shows are very peaceful affairs. It is all more or less respectful, and the bitching is kept only for the most clamorous cases of plagiarism.

In general, things are much more relaxed than one would expect. The Berlin burlesque scene is after all like one big family, and like all families there must be some level of dysfunction!

So what can audience members, both seasoned and new, expect? As they say, ‘expect the unexpected!’Burlesque is full of weird and wonderful characters: dangerous femme fatales, sexy men, crazy glamour queens, gender-bending creatures, cross dressers, sword swallowers, clever strippers, musicians, and everything in between! 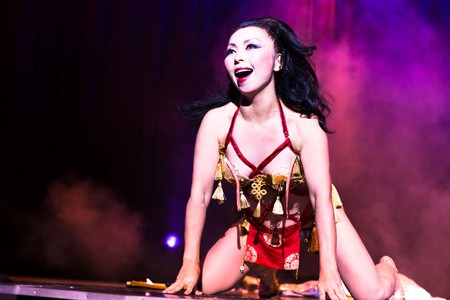 A typical Berlin show takes place in a bar/club or music venue, and it’s filled with a friendly crowd, usually of mixed age. The majority of shows catering to die-hard burlesque fans, have a DIY quality to them, while a few others are more polished. Professional performers are used to bigger theaters outside of the capital, and thus enjoy the fun aspect of performing on the more intimate stages of Berlin. In some cases, there is a live band before or after the show. The show is led by an extravagant and fun master – or mistress – of ceremonies, and variety and burlesque acts take to the stage to an adoring and cheering audience.

The acts vary from glamorous vintage to über weird through to the hilarious. Sometimes there will be an act that will make one go ‘What the hell…?’ But that’s the essence of Berlin, quality is mixed with the kitsch! What a boring world it would be if everything was pristine…

So, now pick an event from the following list, or better yet, pick all, and get yourself down to a live show and support the arts. Check the Facebook group Berlin Burlesque Events for the most up-to-date happenings in the burlesque scene. 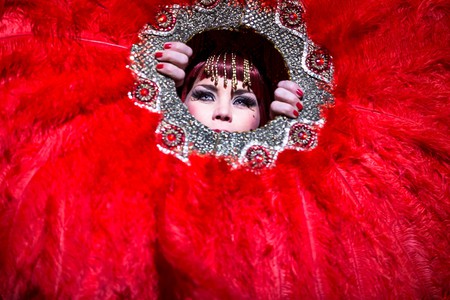 Founded in 2010, Pinky’s Peepshow has become Berlin’s most loved burlesque show, with its home at Bassy Club. Happening monthly on a Wednesday night, it hosts an array of retro bands, singers, burlesque and variety performers from all over the world.

We Love To Burlesque You at Prinzipal Kreuzberg

Another legendary Berlin burlesque party, La Fête Fatale happens three times a year at various locations. These events feature a different theme and line-up every time, and dressing up is highly recommended. Known as a wild and sexy party, it’s defined as ‘Where beauty meets bizarre.’ For more information, check their website.

Happening the 2nd and 4th Sunday of every month, Sunday Soirée is an intimate yet popular regular event in Berlin. It features top artists from all over the world, Berlin, and Germany, as well as newcomers waiting to be discovered, in a warm and friendly atmosphere.

The Big Tickle at Ballhaus Berlin

A new event happening four times a year, The Big Tickle focuses on comedy burlesque and variety. It takes place at the legendary (and recently saved) Ballhaus Berlin – a 1920s venue. For more info on dates please check The Big Tickle’s Facebook page.

The Rock‘n’Roll Burlesque Circus at Wild at Heart

Hosted by Berlin’s own burlesque troupe The Teaserettes, The Rock’n’Roll Burlesque Circus takes place monthly at Wild at Heart. A long running show with a devout following, it features the burlesque troupe known for their crazy antics plus special guests. Check here for upcoming dates. 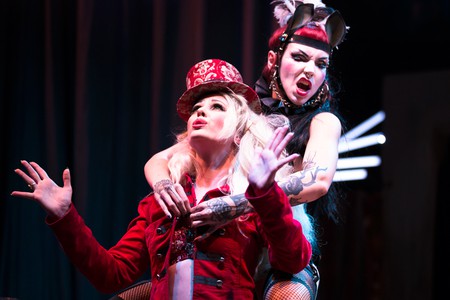 Burlesque and life drawing meet in this unique event, which was founded by artist Molly Crabapple in NYC, and has now spread to over 100 cities all over the world. In Berlin, Dr Sketchy happens a few times a year, and each session features a different theme, with performers posing as tableaux vivants amid a variety of scenery.

Vaudeville Variety is a large-scale single event happening twice a year. It features international burlesque stars as well as variety and cabaret performers from around the globe in one big extravaganza. Here you will be able to find upcoming dates.

Like many major European cities, Berlin also has had its own yearly Burlesque Festival since 2013, which attracts performers from all over Germany and the rest of the world. It happens once a year over four days at various locations. Check the site for more infomation.

This festival, happening over a week in Spring 2017, sets out to be Germany’s biggest burlesque extravaganza. In a variety of venues around town, it will feature multiple shows from Berlin’s regular happenings, plus a gala evening that will bring together talent from Berlin, Germany, and the rest of the world. For more info see here.