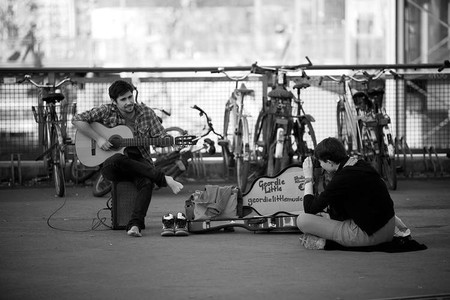 Berlin is an incredibly vibrant city with culture and art around every corner; graffiti and street art, buskers and musicians abound. Here are five street musicians to keep an eye out for next time you are in Berlin.

The Trouble Notes started when Bennet, a talented violinist from New York, decided to quit his job and play music. He then moved to London, where he met percussionist Oliver “after a transcendent jam” in Hyde Park. They traveled to Berlin and met Florian, a guitarist from the rock band circuit. The three musicians describe themselves as an “indie gypsy fusion band,” a mix between oriental and western influences. In Berlin, you can see them performing on Alexanderplatz, Mauerpark, Schönhauser Allee, around Friedrichstrasse, and other places. They’re also touring around Europe and playing in numerous festivals.

Coming from Denton, Texas, rapper Infidelix has traveled through different countries in Europe. He volunteered on a farm to build a house and to help young rappers pursue their dreams before landing in Berlin. Although he’s got opportunities to play on stage, playing in the streets is where the magic happens for him. “The best memory I have is a kid who comes down from his flat each time I play at Frankfurter Allee,” he explains. “He’s probably 12-years-old and plays his drumsticks on the ground next to me.” Infidelix mainly plays at Warschauer Strasse, his favorite spot.

Geordie Little is a lap-and-finger-style guitarist mixing percussions, chords and melodies to create a unique sound. He moved to Berlin in 2012 and mainly can be found playing in Mauerpark or at Warschauer Strasse. He sometimes plays in other European countries or in his home country, Australia.

Zap is the gathering of one Greek and two Australians who decided to spread swing-y music and happiness all around Berlin. Combining percussions, guitar, ukulele, tap shoes, trumpets, and basically all they can use to make music, their performances are real comedy shows. They’ve recently been touring in Australia, and they’re also regularly playing on stage and during events in and around Berlin.

Coming from Cape Town, South Africa, Lou decided at the age of 18 to take a trip to Europe. After traveling from city to city, she landed in Berlin in 2013, where she started busking. You can regularly hear her singular voice and powerful lyrics in Warschauer Strasse or at Mauerpark on Sundays. Even though she has started to travel more in the last months, Lou wants to keep it simple and not turn her music into a business.

What do people think of street musicians?

Geordie Little (also a member of Berlin Street Music) thinks that people are generally on their side. “The amount of people who come and buy my album, or tell me they are glad I’m there, or simply just stop and watch, far outweighs the number of people who complain or are outwardly angry toward me.”

Despite being very talented and creating a friendly atmosphere in the city, street musicians sometimes face incomprehension and rejection. “Street music in an urban context is a complex matter and unfortunately tax payers and voters have arguments that suit the authorities better in many cases,” says Charlotte Specht, co-founder of Book a Street Artist. She also explains that many people make too many assumptions before ever having talked to a street musician in person. “Some claim that a street musician is playing on the street because he didn’t make it on a stage or that they are not talented enough to be a ‘real’ artist – whatever real means, anyways.”

Are mindsets changing about street music?

Little explains that rather than the mindset of the public, musicians are changing “more and more professional musicians are now using busking to reach new audiences. Bands are getting louder and louder, as amps get better and better, but I don’t think the public’s mindset is changing at all. It just means they are faced with more music each day, and a lot of the time, better music.”

In the end, many artists play to bring a smile to your face and make your day a bit happier. Specht thinks that “music is a universal language that anyone can understand, and it can create a more peaceful mood.” Little sees the street as an excellent promotion tool as well as good practice. “The street teaches you how to deal with people, and with situations you never thought you would get into. It’s kind of the hard knock school for musicians.”