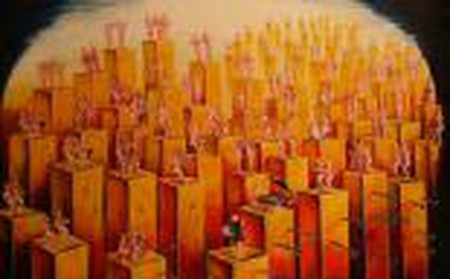 Contemporary Portuguese Surrealism is the subject of an autumn 2013 exhibition at the Fellini Gallery in Berlin, Germany. The exhibition features the work of painter Santiago Ribeiro alongside that of five other significant Portuguese artists who revisit the dreamlike imagery of the 20th Century European Surrealists with fresh and innovative paintings, photographs and new media sculptures. 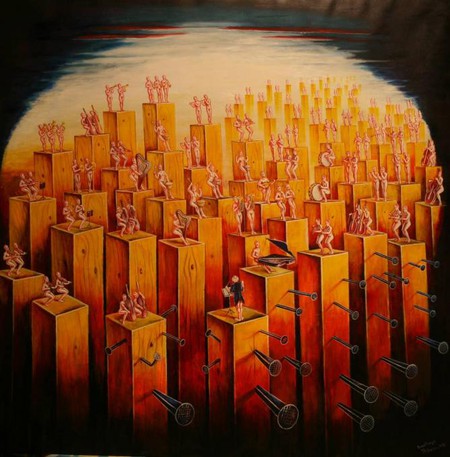 The paintings of Portuguese artist Santiago Ribeiro reveal the inner-workings of a visually engaged mind. Like highly ordered, futuristic interpretations of the fantastical narratives of Hieronymus Bosch, Ribeiro clutters his scenes with small scale, nude figures, overwhelmed by the dreamlike contexts that they are set within. Forms are consistently repeated across his panoramas. In one work tall wooden pillars pierced by massive black nails act as plinths for groupings of musicians, the sea of these combining to form an orchestra. In another painting recurrent Bruegel-eque towers shoot soaring nude figures from trumpeted spouts at the structures’ peaks. Each canvas is more unusual than the last, and this persistent hallucinatory imagery culminates in a celebration of 20th century European Surrealism.

The autumn 2013 exhibition 21st Century Portuguese Surrealism is the brainchild of Ribeiro in conjunction with Fellini Gallery in Berlin, Germany, and combines his own work with that of five other contemporary Portuguese artists. Following from the 2010 show International Surrealism Now, organised by the Bissaya Barreto Foundation in Coimbra, Portugal, the exhibition brings together works of painting, photography and new media sculpture for a reinterpreted Surrealist vision that does not rely too heavily on the work of the movement giants.

Emerging from a distraught Europe following the First World War, Surrealism is characterised by its refusal of logic, and embrace of the strange, at times fearful imagery that streams from the unconscious. Objects or characters that cannot be reconciled in the real world might occupy the same space in a Surrealist artwork creating unexpected juxtapositions. Although a value for spontaneity and chance is at the core of Surrealist methodology, works by artists like Salvador Dali and Max Ernst are highly skilled and appear carefully composed. Subsequent generations continue to revere this intoxicating imagery, and the Portuguese exhibitors reinvigorate this tradition through their fresh take on Surrealist practice. 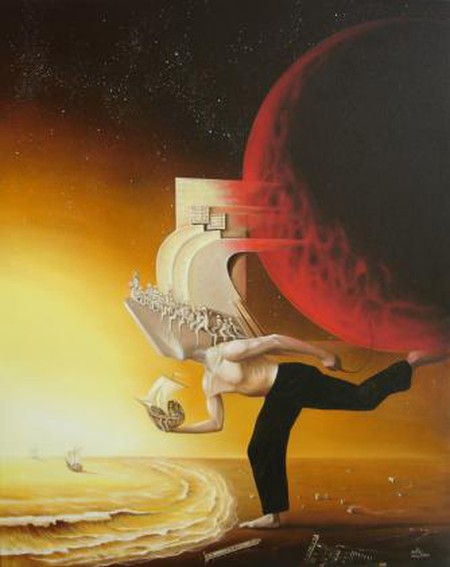 Also exhibiting in the Fellini exhibition, Victor Lages has collaborated with Ribeiro on other occasions and is widely recognised for his variety of public art, sculptures and sacred art hung in churches. One striking Lages work shows a shirtless man balancing on one leg on a flat, deserted seashore. Holding a small sailboat in his right hand, the figure’s head is seen morphing into a ship-like form of its own. Packed with smaller figures whose legs seem to melt over the edge of the barge, the upper part of the ship merges with a giant red planet that hovers over the composition. Other exhibiting artists include Lisbon based painter and writer Hélio Cunha, member of both the French and Portuguese Surrealist movements Isabel Meyrelles, digital artist Paula Rosa, and fanciful painter João Carvalho.

Fellini Gallery was founded in 2008 in Shanghai, China and opened its Berlin space shortly thereafter. The gallery has strong connections to artists and collectors in Los Angeles and China, but also works to cultivate its relationships within Berlin, discovering new local and international talents. 21st Century Portuguese Surrealism runs from 10 October through 20 December 2013, following an initial presentation in Lisbon.

[Update] Santiago Ribeiro will also be exhibited at Taipei’s Get Art Museum until the 20th February. His ‘Butterflies‘ painting will be featured alongside hundreds of other international artists from 77 different countries. The larger exhibition will remain open until 7th April 2017.