1UP Crew: A Berlin Graffiti Collective 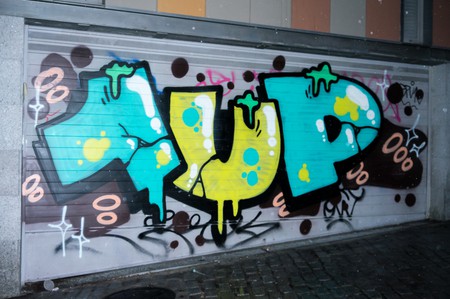 Berlin is so filled with graffiti that its residents hardly even notice the tags that are scrawled over what seems to be just about every building in the city. While some of these images and notations are clearly the work of amateur street artists, others have clear meanings and function as true works of art. The graffiti collective 1UP Crew is doing its part to offer up visual intrigue on an entirely different level.

Together, this team of graffiti artists has covered their hometown of Berlin to an unparalleled extent. The styles of the tags themselves reveal to insiders who is behind the work. More are appearing in the city at all times and ‘once you notice one 1UP tag on a wall you can’t stop seeing them’.

While the membership to this enigmatic group is easy to gain in theory, becoming a legitimate part of the project in practice takes some daring will. Part graffiti artist and part athlete, the thing that unites many 1Uppers has less to do with aesthetics and more to do with placement. It won’t take long to realize the utter insanity of some involved in the scheme who are literally willing to bring the tag to new heights, mysteriously fitting it in all kinds of absurd places. Some have even had the audacity to paint the tag on a moving subway train, something that has gained them particular notoriety.

Once one begins to look, it becomes clear that the 1UP tag really is marked on buildings all throughout Berlin on walls, roofs, abandoned buildings and a succession of subway cars. What’s more is that this originally Berlin-based operation has expanded. Now, the tags can be seen in major cities across the globe, sprawling over countless surfaces.