15 Wacky Jobs You Can Only Have in Berlin 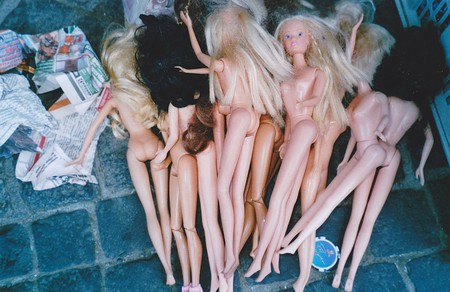 Every city has its perks, quirks and I heart shirts. Considering how free and liberal Berlin is, it should come as no surprise that this city has its own box full of wacky and laughable jobs that are unique to this city alone. Here’s our pick of the quirkiest jobs in town.

One of the latest Berlin trends in the past five years is having a baby. Since the birth rate here has been considerably lower than the birth rate in all of Europe, but especially in Germany, the government started a campaign to encourage young couples to start having children. With the new arrivals came a whole wave of shops, jobs, and baby toys, along with swimming courses, baby massages, and yoga for infants – many of these courses are even covered under German insurance. 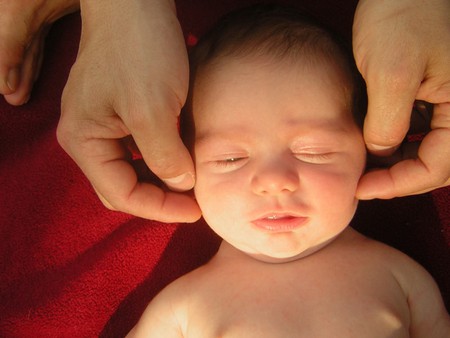 Maybe you never thought about what happens in the clubs during the week, or how it takes that long to clean after the intense weekends. Take on a job as a club cleaner and you might – imagine what kind of disinfectant outfits you’d wear while cleaning up clubs like Berghain or Sisyphos. 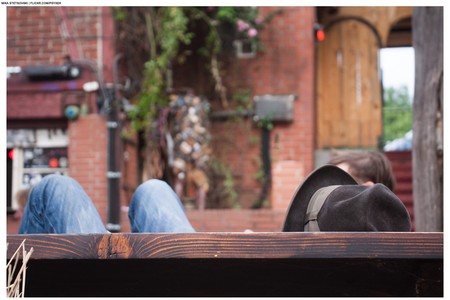 Berlin is pretty notorious for its spa scene – it’s how the locals survive their six-month winter. If you make it to Berlin on a cloudy cold week, check out a spa like Liquidrom as part of Berlin’s must-do list for all visitors and inhabitants. Working in the spa is not especially unique, but being the individual in flip-flops who has to swing around a wet towel in the spas to disperse the heat, that’s a special job. Every gym in Berlin is equipped with a sauna, and every sauna in Berlin is kept cool by one of these towel swingers. 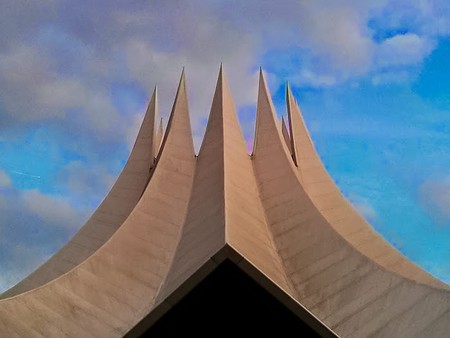 One of the more modern occupations in Berlin are the controllers that snake through trains, trams, and sometimes even buses. What’s especially unique about these working figures is the fact that they dress in your everyday outfit, so there is no way to separate them from the common folk. Most cities have turnstiles and official metro workers in uniform – except in Berlin. Consider yourself warned. 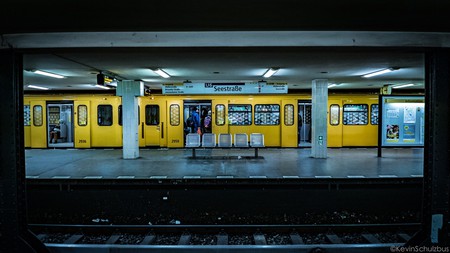 It’s impossible to miss a flea market on the weekends in Berlin. Besides the obvious goodies you find on the racks and inside the booths, when you approach the professional vendors who have endless tables with brown cardboard boxes filled with the most historical junk, it makes you wonder where they manage to find and store their precious toys and tools when they aren’t working on the weekends. It must take some serious hands and eyes to find the objects these vendors have to offer. 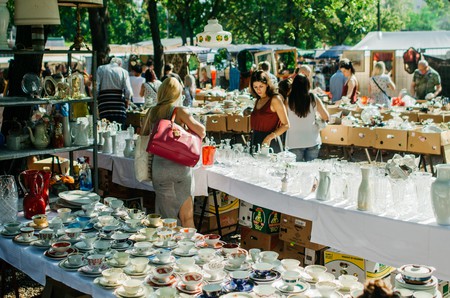 A lot of the locals sign up to be an extra in films, commercials and posters. Some get jobs as an extra in a Penny commercial, to be the face of the next Turkish/German TV series when they aren’t even German, or they get paid to walk through the distant background of a Lufthansa commercial. The pay is quite good, and all you need is 6-8 hours in your day while you sit and wait for the cameras to roll. 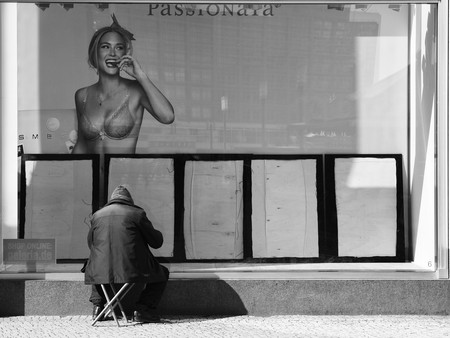 The Kaugummiautomat are all over Berlin. Some of them work and some of them don’t, but almost all of them are full. It’s easy to understand how the ones that swallow your change keep their gum balls and miniature plastic action figures, but how are the working ones still full? Is this the work of some unknown unseen Berlin Santa? What’s a city without a little mystery? 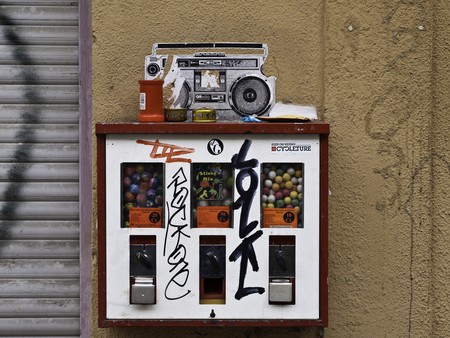 Berliners rightfully take pride in their Berliner beer, and nowhere is this more evident than at the Berliner Kindl Schultheiss Brauerei. Offering tours, beers, and more beers, it also boasts an in-house pub where you can drink to your new found knowledge and appreciation for the delicious brew. Besides all the helping hands that go into making the Berliner Kindl its utmost perfection, imagine being the security guy of such an important place – one can only imagine the staff perks. 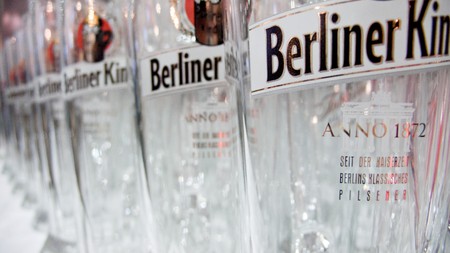 Working in the ‘hospital’ in a club

Thankfully in almost every club there is a safe room for people who are clubbing(?) too hard and need to take a break from the high times the Berlin club scene has to offer. Some of the people working in the club are there especially to look out for people who look too wasted to bring themselves to a proper place to sit and chill. One wonders if the trained medical professionals working in these rooms had a full understanding of what they were getting themselves into. 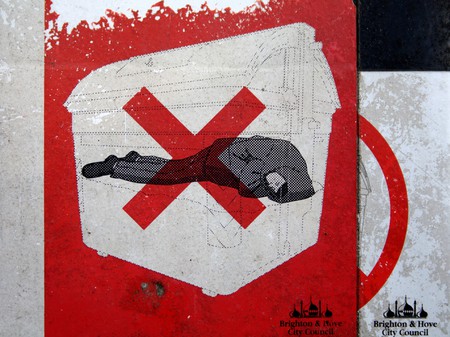 No sleeping in the communal rubbish bin… | © Dominic Alves / flickr

Berlin’s Crematorium Baumschulenweg is one of the most inspiring pieces of architecture the city has to offer. It’s either on your radar as a piece of art you’re already in tuned to and seek out, or it’s a place you happen upon by some far-out chance. Besides the attractive architecture, it makes one wonder what it means to work in such an unearthly place. 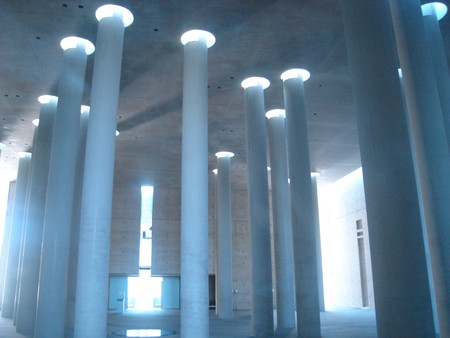 Many Germans who are fascinated with the history of the city turn to working as a city guide for national and international tour groups. Many of these guides are actually not even German, but are Auslanders (foreigners) who are passionate about the city and its remaining icons. One of the more interesting guided tours, not to the merriment of your Berlin local, is the Beer Bike Tours Berlin. These tours are limited to a minimum of six people per tour, and with good reason – imagine trying to guide a group any larger around the city while they are drinking and pedaling. That’s certainly not your average job. 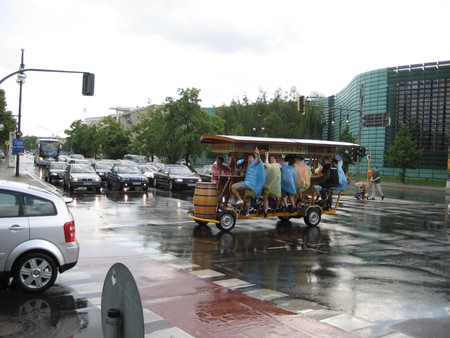 Babysitting for parents who go to Berghain

This is a real thing. Just because you have a child doesn’t mean you should stop having fun, right? Many Berliners stick to their party going lifestyle even if they have a baby on board (and in bed). As soon as their babies are off of the bottle and onto real food, many locals look for babysitters to sit, or sleep, in their flats for the night while they spend the next eight hours dancing in Berghain. Pretty cool. 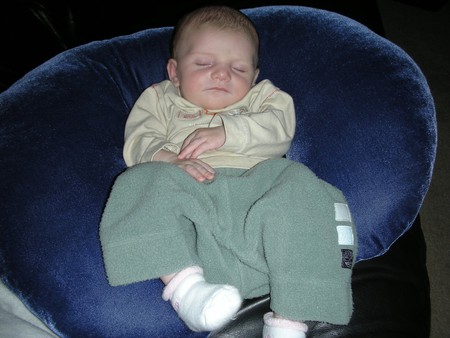 Have you ever seen a man or woman juggling in front of cars waiting by a red traffic light? In Berlin it’s commonplace, as the city has more than a few circus and juggling schools. There are schools and course like CABUWAZI which offer circus training courses for Berlin’s next generation. It must be such a great job training kids how to ride a unicycle up a set of stairs while blowing fire out of their mouths – a pretty magical way to spend your hours after school.

Kit Kat Club is without a doubt, one of the most provocative clubs in Berlin. This club is only for very open-minded party people. While the bouncers have an interesting job selecting who to allow in, the bartenders in this club have a whole other perspective of their Kit Katters. The bouncer meets and greets the crowd before they enter this portal, while the bartenders get to observe and serve the free forming crowd. 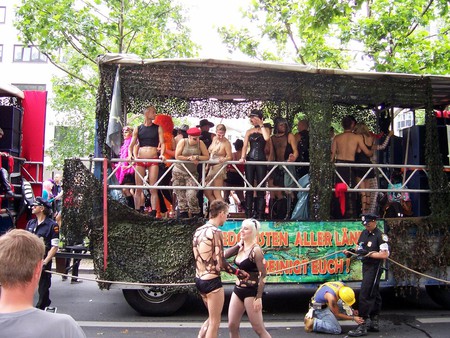 Anyone with a hint of curiosity running through their veins has to wonder what actually goes on behind those stickered windows that highlight the privacy of the place – it could make a good setting and story for a Fassbinder film, recording the men working behind those green tables.