10 Berlin Poets To Look Out For 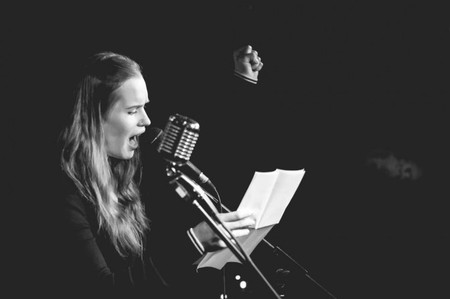 From Bertolt Brecht to Christa Wolf and Judith Hermann, Berlin has been the home of many writers throughout history. Today, the Berlin poetry scene is still thriving, with writers from all over the world writing and performing poetry in the city’s bars, cafés, and theaters. Germany is considered the European capital of poetry slams; you can find a poetry event almost every night in Berlin.

Wolf Hogekamp, heralded as ‘Mister Poetry-Slam’ by the newspaper Tagesspiegel, hosts the popular event ‘Bastard Poetry Slam,’ and has been the godfather of poetry slams in Berlin since 1994. A poetry slam is an event like no other, where ten or more poets battle it out to win the crown of best slam poet of the evening. Each poet has five minutes, and the audience chooses the winner by applause. Poetry slams are first and foremost an open platform for poets to experiment, tell stories, make the audience laugh (or cry), and sometimes even improvise.

Julia Eckert has been writing poetry since she was at school, and is highly respected on the German poetry slam scene as one of the best young female poets from Berlin. On stage she is instantly likable; the soft sound of her poems casts a spell on the audience. Her poetry is intensely lyrical and uses vivid imagery to tell tales of the city. Watch her perform below.

Jessy James LaFleur is a tour de force on the German poetry slam scene, ‘tour’ being the key word here as she regularly performs all over Europe — from Paris to Estonia, she is always on the go! A rapper, a poet, and a wonderful host, she co-created the unique poetry slam ‘Bubbleslam’ in Berlin, and much more. Her poetry reflects her love of hip-hop and free speech; she writes poetry in French, German and English.

Marvin Weinstein hosts, organizes events, and performs in some of Berlin’s best poetry slams. A strong performer, his poems are personal, relatable, and are usually met with a chorus of laughter from the audience.

Another regular in the Berlin poetry slam scene is Marko Laskowski, who is a favorite among audiences for his witty and hard hitting poetry. A rapper, a musician, as well as one of the city’s best poetry slammers, he has been nominated for the Berlin Brandenburg slam championships for his comic, yet also tragic, and bittersweet poems about his life in Berlin.

Berlin is an international city, with a buzzing English-language poetry scene. Lady Gaby is at the heart of English-language poetry in Berlin; her distinct voice has made her a favorite at poetry events. With poems about the arbeitsamt (job office) to poems about feminism, her poetry is sharp, seductive, and enticingly personal. Lady Gaby also works with performance art, and often performs at exhibitions and live art events, as well as hosting Poetic Groove, an event that combines performance poetry with live music at Berlin’s English Theatre, alongside co-founder Robert Grant.

Robert Grant is also one of Berlin’s best known English-language poets. Originally from the UK, Robert Grant has been living in Berlin for many years, and he has established himself as a charismatic performer who features at many of the best poetry events. His poetry is loud, honest, and profoundly human in its accounts of modern life. He has recently published a collection of ‘post-beat poems’ called Naked in the Coffee House; taking contemporary life in Berlin as his subject, these poems were written in the bars and cafés of Berlin.

Host of the popular event ‘Poetry Meets Hip Hop’, Jumoke Bolanle Adeyanju Omonga brings an atmosphere of warmth and respect to the stage. Her love of poetry is kindled by her love of her hip hop, which she originally discovered as a dancer. She writes and performs her poems in German, English, Kiswahili and Yorùbá, and uses striking images to depict profoundly emotional experiences. She also advocates youth programs in Turkey.

Moona Moon is a much loved presence in the Berlin poetry scene for her political and moving lyrics, which combine hip-hop beats with poetic verse. Often combining German and English in her poems, all of her poems carry an inspiring message on issues of race, gender, and culture within society.

This is by no means an exhaustive list of poets in Berlin. There are many more wonderful poets living and performing in Berlin, from all over the world. Take our advice and go find them for yourselves.