Where to Find The Best Bretzls in Munich 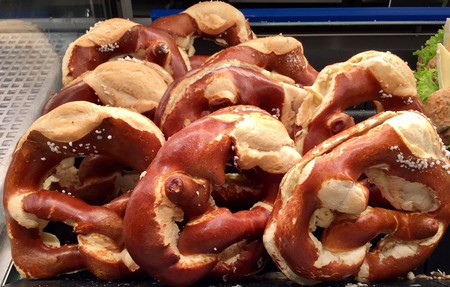 More than just bread, these giant, salty pretzels, or bretzl, are a thing of beauty. More than that, they’re an institution in Munich; you’ll find them at bakeries, beer halls, restaurants, parks – at any given point, you’re almost certain to be in walking distance of these chewy, salty snacks. Here’s where to find the best pretzels in Munich. 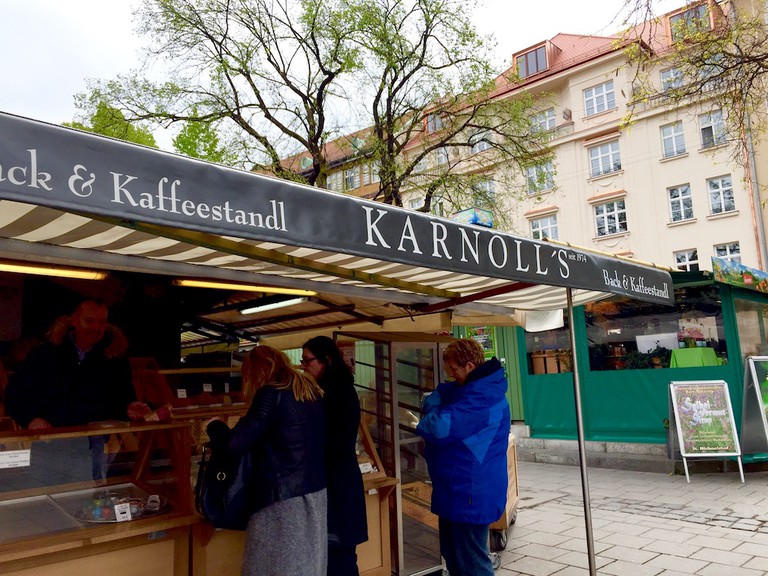 The Karnoll's stand | © Roanna Mottershead
Head to the grandfather of all Munich food markets, Viktualienmarkt, to try out the self-proclaimed best pretzel in Munich. Karnoll’s is a small coffee and bakery stand that’s been a staple of the massive market since 1974 – you’ll find it in the renovated section 6. Still managed by the same family, they specialise in serving fresh-from-the-oven pretzels baked in the traditional Bavarian way. What makes them so yummy is that despite a crispy outside, they’re beautifully soft and fluffy inside – almost like a baguette. Wash it down with some steaming coffee and both will only set you back €2.25. They’re not lying: it really is the best bretzl in the city.

If you’re getting peckish while sightseeing, Wimmer is a safe bet. This Munich-based bakery franchise has branches dotted all over the city, but is still in the same family after three generations. Now a baking empire, you’ll find a full range of pretzels to choose from: regular, butter, and cheesy. With an incredible range of pastries and fresh rolls (try the rosemary and sea salt one while you’re there), you might find yourself leaving with more than a pretzel or two!
Various locations across the city

Bakery, German, $$$
Facebook
Email
Twitter
Pinterest
Copy link
Share
Based in the popular Neuhausen area, this bakery has developed a reputation in the local neighbourhood. With pretty red and white awnings, you’ll spot Leon’s on the corner of Leonrodstrasse and Albrechstrasse; on Sunday’s you’ll even see locals lining up down the street to get their favourite loaf. Their pretzels are everything this Bavarian carb should be: chewy yet soft, with just the right amount of salt. If you’re still hungry, they have additional light bites such as mini pizzas.

Full disclosure: in a city where baking is taken extremely seriously, Backwerk is often looked down upon as the McDonalds of the Munich bakery world. Don’t let such snobbery put you off! These guys make incredible large fluffy pretzels that are great value – they start from just 59 cents! This is also the best place to try a butter pretzel. Exactly as it sounds, the pretzel is sliced in half horizontally and about half a tub of butter spread inside. As delicious as it is addictive, it’s the ultimate German snack.
Various locations across the city

This family-run bakery prides itself on using traditional methods to create a truly authentic taste. That means no additives, organic ingredients, and no aluminium in their pretzel production. The result has a much milder taste that’s best enjoyed at the start of the day. They’re busy training the next generation of bakers too: owner Ludwig Neulinger picked up the city’s Erasmus-Grasser prize awarded to traditional craft companies that are training young people.
Volkartstraße 11, 80634 München, Germany, +49 89 13959944
Wörthstraße 17, 81667 München, Germany, +49 89 62286742

With its now well-known blue banners, Rischart is always a reliable choice for your baked-goods fix. The five-generation empire started in 1883, and their branch near Marienplatz has now become the most visited bakery branch in Germany with over 1.2 million visitors a year. They create their pretzels a little differently: they’re smaller, with a slightly sweeter taste that makes them very moreish, and they use great quality butter for their butter-bretzl. Taking a seat in the cafe will pretty much double their prices, so grab one on-the-go for better value.
Various locations across the city 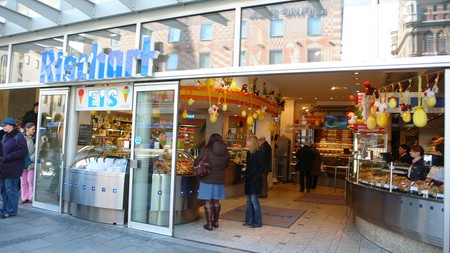