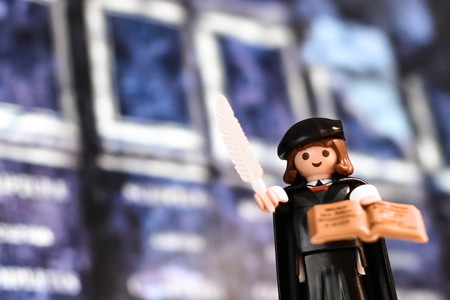 The old town in the middle-German city of Erfurt is one of the most well-preserved in the country. Though it is worth a visit at any time, in 2017 there will be special events to celebrate famous inhabitant Martin Luther, and the 500th anniversary of the Protestant Reformation. Luther went to university for law, had a change of heart, and was later ordained at Erfurter Dom. His 95 theses were nailed to a church door 200km away in Wittenberg.

Erfurt is two hours southwest of Berlin, 45 minutes west of Leipzig, and three hours northeast of Frankfurt. Its slightly-awkward location is part of the reason the town was spared Allied bombing. Nevertheless, it does fit in very nicely as part of a Berlin–Görlitz–Dresden–Leipzig adventure. There are good train connections from all major cities in Germany, so renting a car is not really necessary.

No less a man than Luther himself described Erfurt as the “City of Towers.” The 25 churches in the town center remain, the most striking two of which are Erfurter Dom and the Church of St. Severus. Inside St Mary’s there are 13 stained glass windows each 18m high. Also still standing is The Old Synagogue, Europe’s oldest, fully intact Jewish house of worship, complete with ritual bath and Jewish history museum.

If religious history isn’t quite the stuff your holiday dreams are made of, then have a walk around town and take a look at the many examples of medieval, neoclassical and GDR architecture. Cross one of the 142 bridges spanning the river Gera and the Flutgraben, a broad canal/supermoat that runs alongside the old city walls.

Check out the fortress

Zitadelle Petersberg sits high on the hill like the ominous sentinel it was meant to be. Take a two-hour guided tour of the rabbit warren of tunnels below, or simply wander around the grounds and take in the fantastic view.

Go to a market

The most famous bridge is Merchant’s Bridge, the longest inhabited Medieveal bridge on the continent. Every year, the neighborhood has a festival celebrating ancient craft, and historical song and dance complete with jesters. In springtime the pottery market comes, followed by the flower market in summer, the harvest market in the autumn, and finally the Christmas markets.

Have some top-drawer sushi at Gingko and then head to Modern Masters, the city’s best cocktail bar, or get some pub grub at Steinhaus before heading next door to cut the rug at Engelsburg. If a night at the club isn’t quite for you, try the puppet show at Theater Waidspeicher, or catch some live music at one of the many concert venues around town.