5 Famous Oktoberfest Songs You Should Know 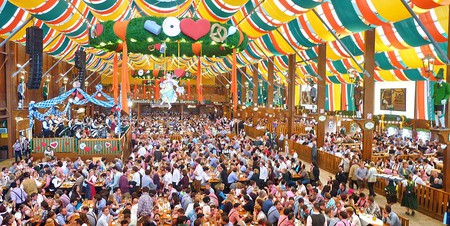 While Oktoberfest is largely about drinking beers and indulging in hearty Bavarian cuisine, it won’t take long for festival attendees to realize that this 16-day party also harbors a long history of song and dance. From Alpine yodeling and polka music to pop tunes adapted for the event, there are some songs that everyone needs to know. Here are the five most important ones.

Largely considered to be the anthem of Oktoberfest, ‘Ein Prosit der Gemütlichkeit‘, which means ‘I Salute To Our Cozy Friendship & Good Times We’re Having Together’ in German. Bernhard Dietrich is the one originally responsible for this tune, which will undoubtedly be sung at every turn during the 16-day festival. Really, the accompanying gestures make this more than just a song. When people begin singing it, it’s time to clink glasses with everyone in sight in celebration of this merry party. Of course, be warned that this is a pretty easy way to quickly become inebriated. Small sips!

‘Das Fliegerlied,’ which means ‘The Aviator Song’ in German, is about a fellow who is enjoying himself so thoroughly, he feels as if he could fly. While the original is by the band DONIKKL, Tim Toupet’s more modern pop version is the one you’ll likely hear at the fest. As with ‘Ein Prosit der Gemütlichkeit’, ‘Das Fliegerlied’ comes with accompanying gestures. In this case, the song has a set of associated dance moves designed to get everyone out of their seats and moving around by giving their best imitation of an airplane. Imagine thousands of people jumping around in unison inside of an Oktoberfest tent to get a feel for the true magnitude of infectious fun of ‘Das Fliegerlied’.

‘Schatzi schenk mir ein Foto’ is a relatively new addition to the Oktoberfest musical repertoire. Interestingly, this song actually originated in the Netherlands where the Dutch version reached number one in the charts. The song was translated to German and adapted for the Oktoberfest celebration, and it was popularized thanks to Mickie Hrause. In English, the song title means ‘Honey, give me a photo,’ and it’s about a man trying to sweet talk his love interest. Since 2011 it has been a major hit on the Wiesn.

‘Das rote Pferd’, or the ‘the red horse’, is a catchy track that’s sure to get stuck in your head at some point during the festival. The Paul Polo version, in particular, is the one most likely to be heard at Oktoberfest, but ‘Das rote pferd’ is actually an old children’s tune sung to the melody of Edith Piaf’s song ‘Milord’. Due to the origin of the song, its lyrics are simple and short, making it easy for even non-German speakers to sing along. Plus, part of participating in this song requires partiers to mimic a horse amongst other downright goofy gestures.

‘Das rote Pferd’ is often accompanied by ‘Cowboy und Indianer’. Like the former, it is appealing in its nostalgia to earlier days. The lyrics and subject matter of the song are pretty self explanatory, featuring talk of lassos and romping. It is also accompanied with animated dance moves and hand gestures, which are done with much enthusiasm on top of benches at the festival. Even though talk of cowboys and Indians might seem out of place at a festival in Southern Germany, this sentiment wears off quickly after a few rounds, and a liter or two of Oktoberfest beer probably helps in this regard as well.