Top 10 Things To Do And See In Neukölln, Berlin.

Neukölln is an attractive borough for more reasons than can be counted. Its revival has occurred so rapidly even Google Maps can’t always keep up with its faster-than-the-speed-of-light progress. Endless vegan cafés and spritely hybrid stores dot the once uninhabited streets, sandwiched between kebab shops and laundromats. Keeping up with the traditions of the rest of Berlin, what was once abandoned has been recycled into something distinctive, imaginative and irresistible to explore. Here is a list of unmissable details in the Neukölln narrative.

What would any Berlin guide list be without an art gallery? Cell63 is the brainchild of the Italian-born artist, Luisa Catucci. This creative venue doesn’t cater to just one type of art, it invites all artists, from illustrators to mixed media sculptors, to adorn its walls. With rotating exhibitions, various workshops and a seamless transition between workspace to showcase space, this gallery is a unique and necessary gem of the Berlin art gallery scene. Cell63 is a platform for international artists to come, create, and showcase and for patrons to explore, marvel and enjoy. 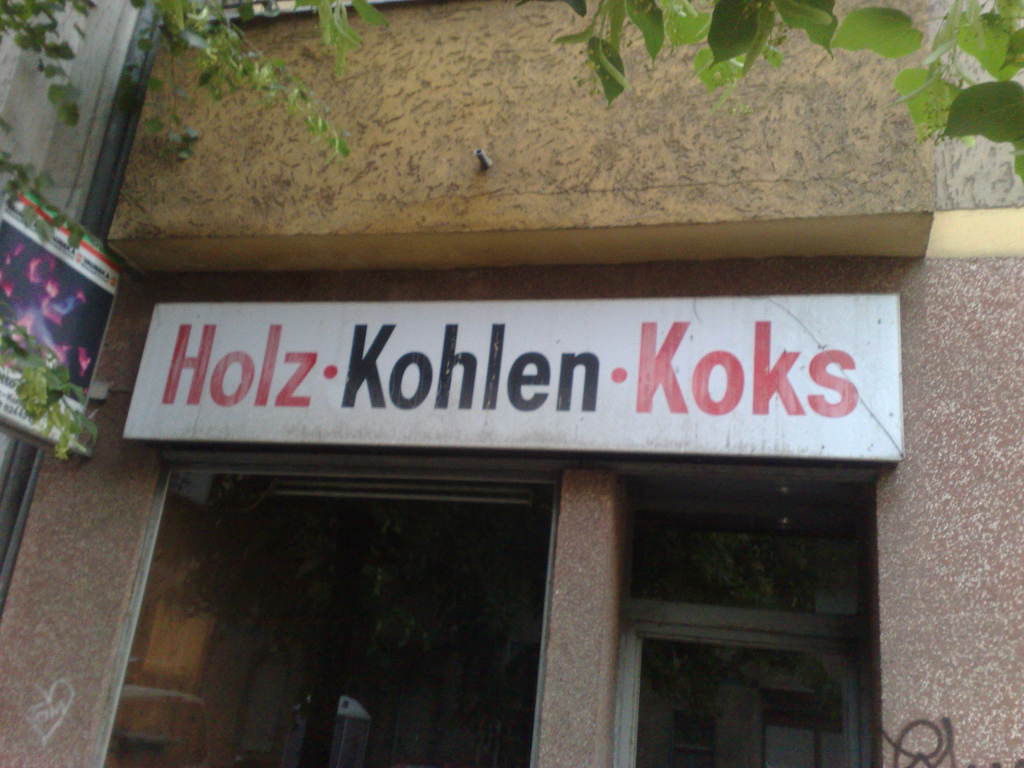 The one-size-fits-all pedagogy just doesn’t cut it in Berlin. But Berlin has adopted the ‘if it can be imagined it can be created’ mentality, which gave birth to numerous stores that are diverse in nature. Holze Kohlen Koks remains category-less, not because it’s undeserving of one, but because it doesn’t fit into just one. This part exhibition space, part studio, part furniture store takes a keen interest in aesthetics of the eye and pleasure of the mind. The owner of the studio is a furniture designer, product designer, and interior architect who takes pride in his work. His background of exquisite craftsmanship bleeds over into this concept space. It has rotating art shows and sells unique furniture that caters to being more than just an inanimate object in the negative space. This is a place to come and visually drink in some creative pieces or take some home, perhaps in the form of an idiosyncratic lamp. 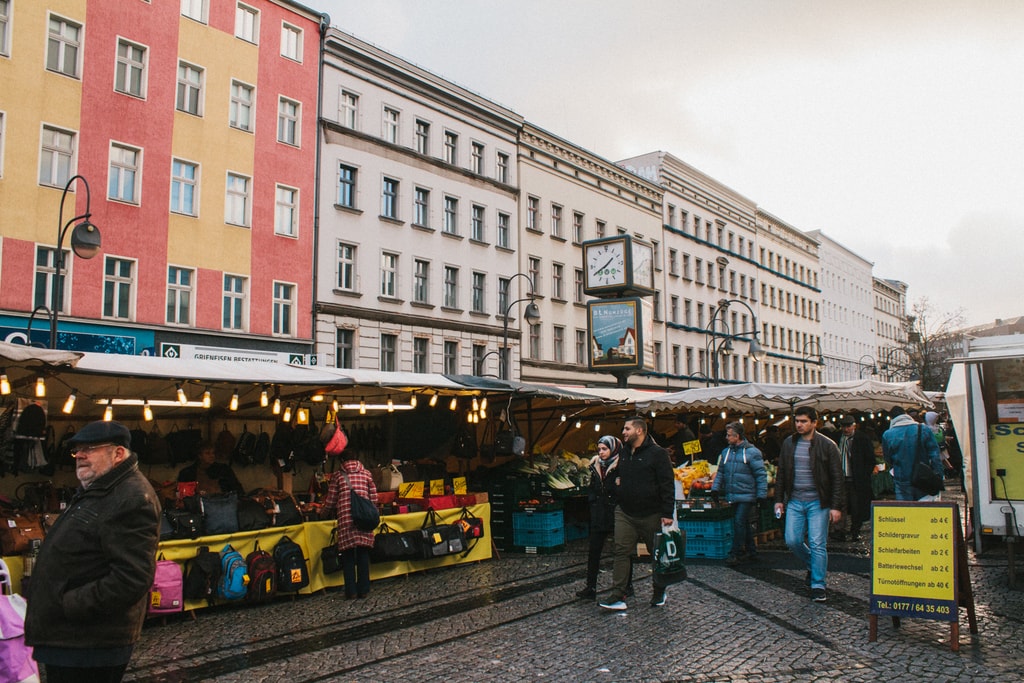 Schillermarkt is a quaint and tiny market located outside a picturesque church in Herrfurthplatz, in the belly of Neukölln. Despite the small size of the market, it is still an integral asset to the neighborhood that just about fills every niche. So often these farmer’s markets become labyrinths that overwhelm with quantity. It’s nice to have choice, but too much choice is formidable and having to work your way through a Byzantine conduit just to get some fresh Käse isn’t an ideal Saturday morning. Schillermarkt packs variety, quality, and quantity into a small harbor of stands. The fishmonger is a go-to favorite as he smokes his fresh fish on site in an adjacent smoking station. The high-caliber cheese stalls are also worth making a trip to. This place is superb fresh market shopping without the overkill. 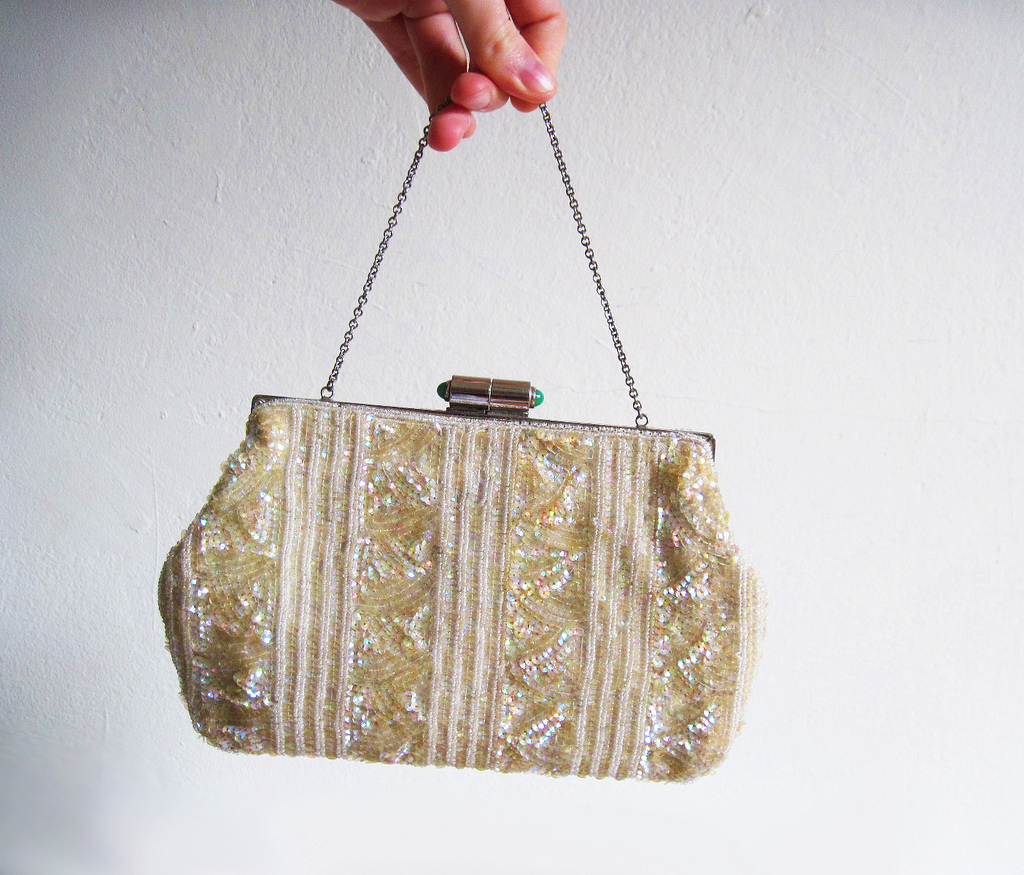 The cleverly named vintage store and project space is named after the line supposedly uttered by Marie Antoinette. Let them eat cake is another hybridization in the land of Neukölln that encourages its patrons not to have to choose between two activities or interests. Maybe it’s time for a Jean Louis Scherrer silk set up? Or maybe its time to bear witness to some fresh artistic perspective? With Let them eat cake, both avenues are in reach. The clothes at this vintage shop are hand-picked with quality at the forefront of the decision-making process. This spot errs on the more expensive side of vintage shops, but it is a sign of the top-notch selection in this boutique-like space. The great vibes of this place, the graceful layout and the incredible selection of vintage clothes make this place worthy of its praise. 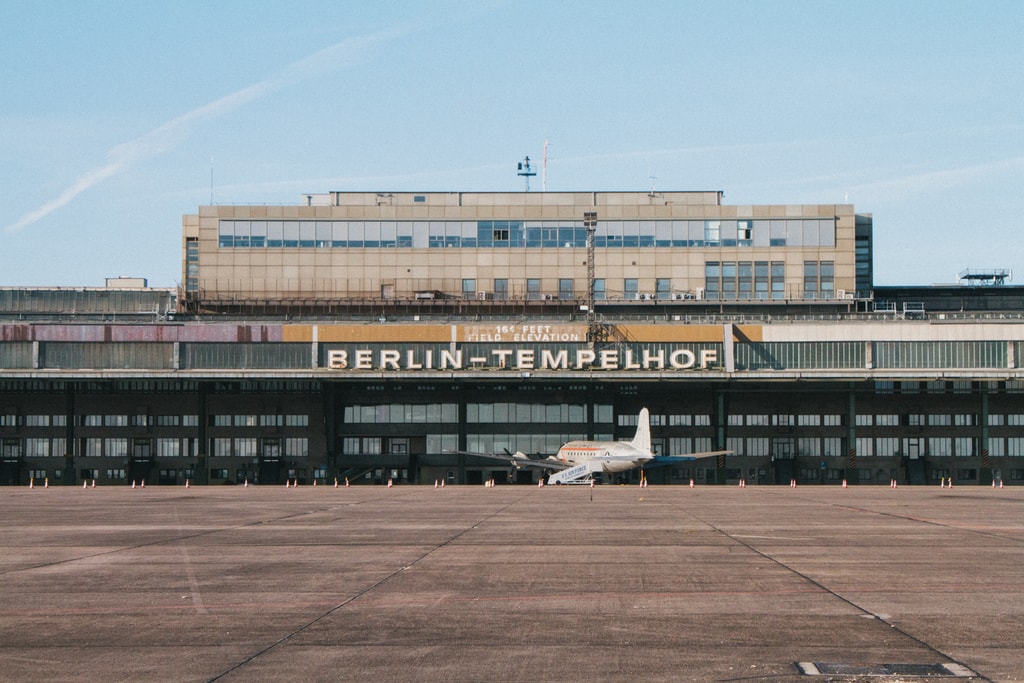 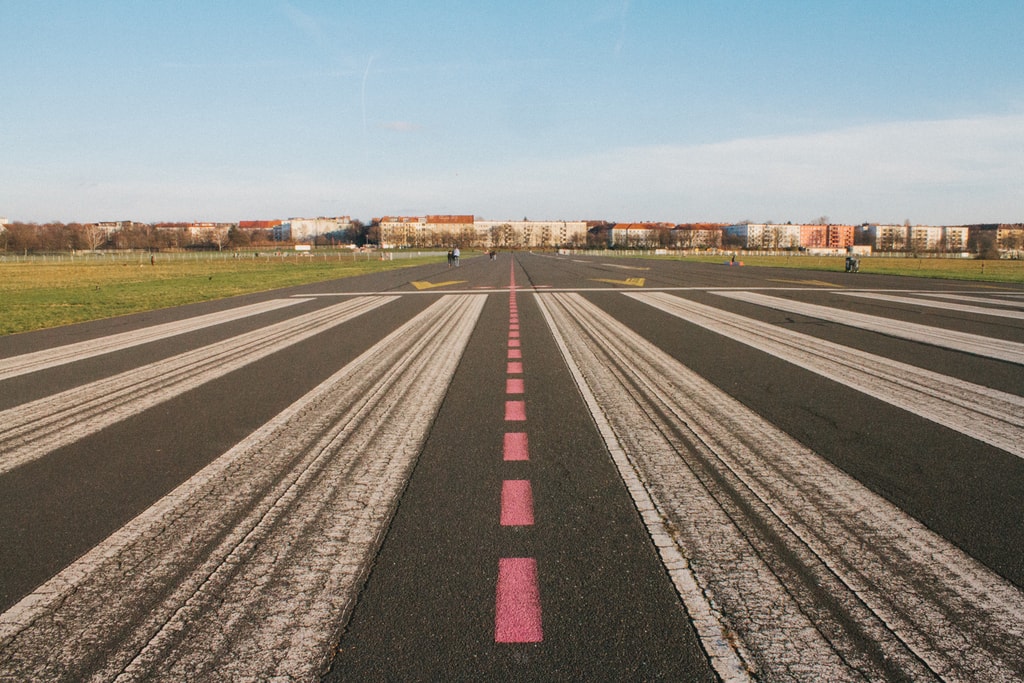 Tempelhof Airport was a paramount airport in the pre-World War II era in Berlin. It’s closing in 2008 caused quite a stir. Part of the closed airport neighbors the western border of this newly trendy borough. Since its closing, the genius city of Berlin reclaimed this massive space. The airport itself is used for various events like the Berlin music festival, but that’s on an irregular basis. This colossal 386 acre stretch of boundless area invites expats, natives and tourists alike to come barbecue, stretch out in the sun or for the more active, hike, run, or bike on one of the countless trails. The magnitude of this open space champions a kind of freedom that encourages park-goers to occupy this park as they wish.

A part of the draw of living in Berlin is the bustling mechanics that make a city a city. The vibrancy and constant motion of the metropolis, though appealing, can be daunting. That’s where Britzer Garden comes into play. Britzer Garden is a vast park tucked away in the heart of Neukölln. It’s tailored more towards children with its three massive and well-equipped playgrounds but has magnetism for all. This park plays host to endless greenery, a lake, and has ample room for flying kites, enjoying the majesty of the flower gardens, or playing football. It’s the perfect spot for a picnic, and there’s a café and various snack stands. This is the type of park where you can choose to join in on the fun or bask in the serene ambiance. Fun animal statues and an antique windmill add charming touches to this prodigious plot of land. 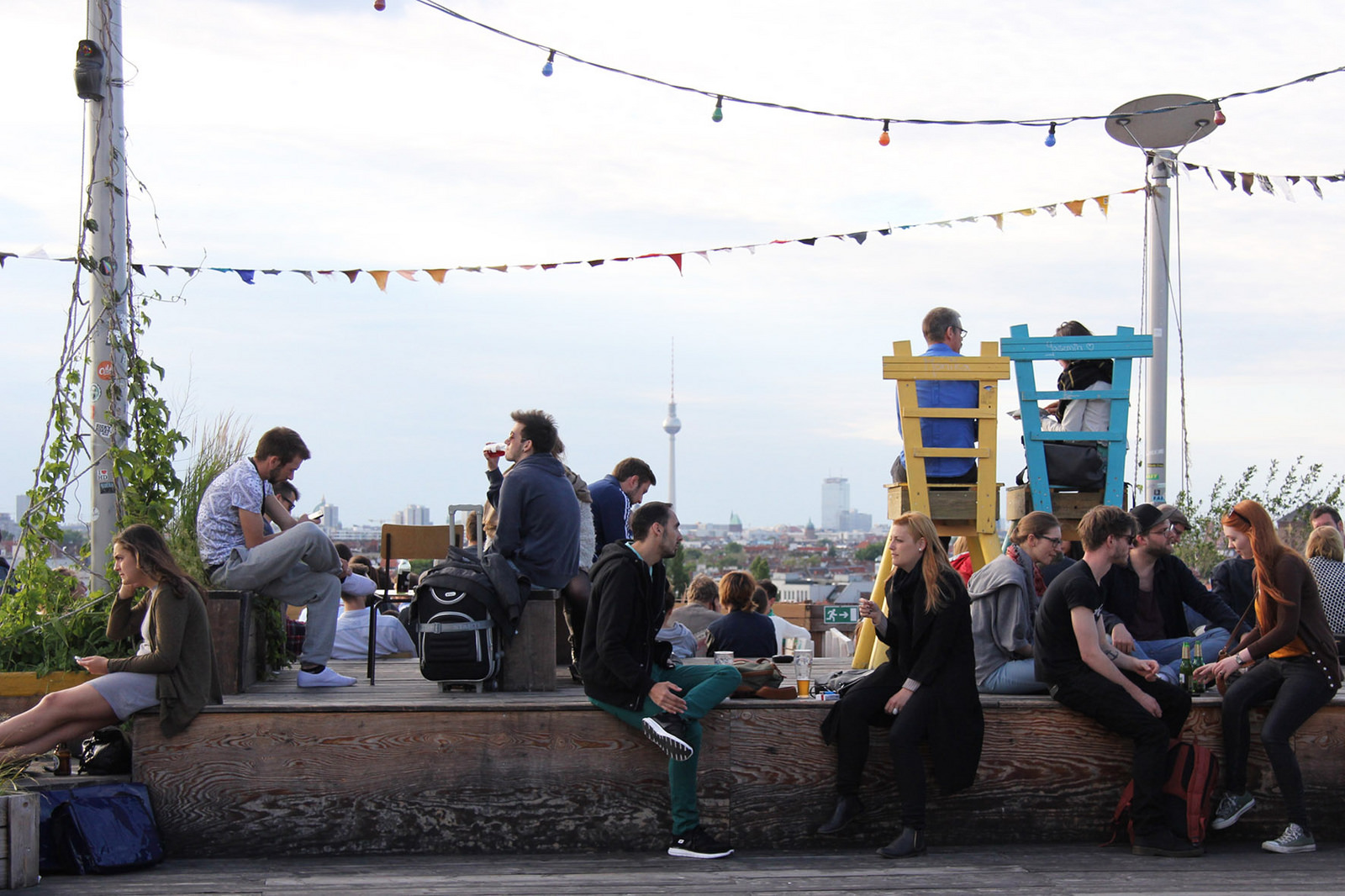 Bar, Cafe, Pub Grub, $$$
Thanks to its location on the rooftop of a shopping centre, Klunkerkranich is a great place to catch the sunset | © Peter Delius / Alamy Stock Photo
There are some bars that begged to be instagrammed because of their sweeping views and their effortlessly cool arrangement of artisanal décor. There are some bars whose names stay on the tip of the tongue, not because they are particularly easy to say, but because they get pocketed as go-to destinations. Klunkerkranich is a watering-hole heaven. It’s nestled on the top of a half mall, half parking garage high-rise, think any quintessential New York summer rooftop party, only more spacious and more German. The bar is on the inside with a dance floor and carries some cheap drinks ranging from beers to the hard stuff. The outside is a hodgepodge of what looks like an abandoned bohemian garden party mixed with recycled hipster chic. This place is perfect for starting off the night or enjoying a relaxed drink with a view while taking in the sunset. Since it is an outdoor spot, warm weather pairs best with this spot, but those who dare to brave the cold won’t be utterly disappointed with the exquisite views. Klunkerkranich is an ideal inner-city getaway where it’s still possible to get drunk.
More Info
Open In Google Maps
66 Karl-Marx-Straße, Bezirk Neukölln Berlin, Berlin, 12043, Germany
View menu
Visit website
Visit Facebook page
Send an Email
Give us feedback

As society catapults itself into the future both willingly and unwillingly, it has gotten definitively less definitive. This isn’t a bad thing. This just means sometimes people want both chocolate and vanilla. This means people don’t want to have to choose between drinking coffee or petting cats, why not embrace the futuristic beauty of hybridization. That’s exactly what Gordon does. Gordon is a café and a record shop. Certain items just pair together: drinking and currywurst, wintertime and hibernation, and now, finally, sonic exploration and caffeine. This Israeli implanted establishment pairs seriously good tunes from Tel Aviv with frothy, well-made cappuccinos. The inside is piled high with vivacious textiles, smooth wooden accents and, of course, records of various tastes. Like any good store, the concept is palpable, and the concept of good coffee coupled with harmony-happy tunes can be felt in this lovely homemade haven in Neukölln. 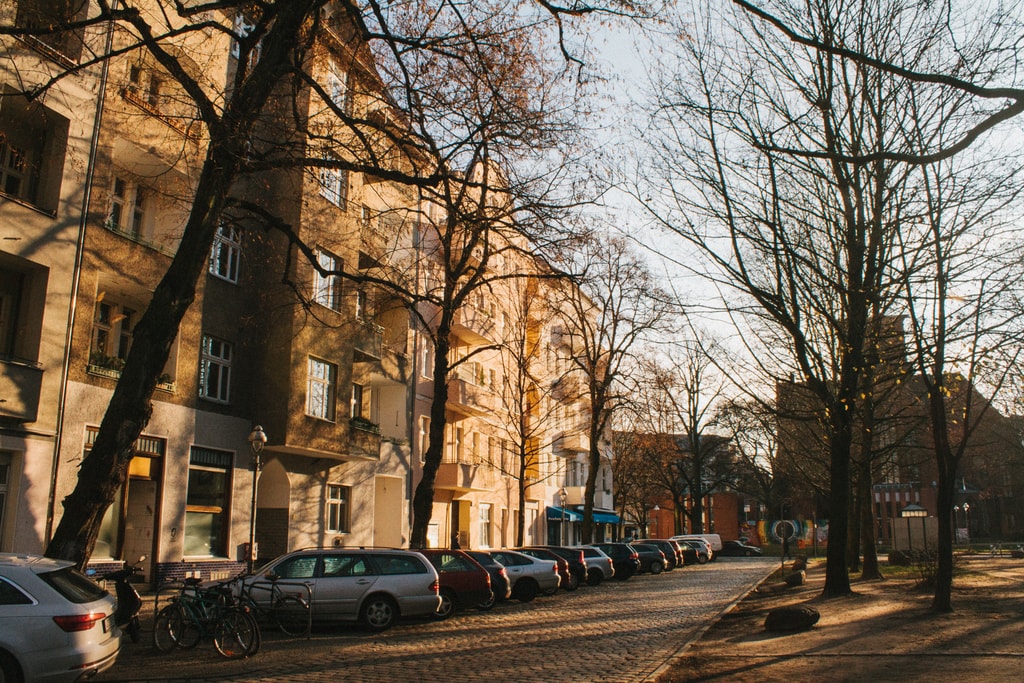 This charming and Bohemian time capsule of the neighborhood used to be a part of the historical village of Rixadorf. Walking through Richardplatz is bearing witness to the vestiges of antiquity. The oldest buildings in Neukölln are on or adjacent to Richardplatz. Many of the old village buildings like the church, the blacksmith, and the stein have been preserved and serve as an escape from the bustling cityscape. Additionally, Richardplatz opens up doors to other-worldly pockets like the Comenius-Garden, a nearby public garden that is both furtive and breathtaking. The famous Christmas market also takes place here in the second week of Advent, in addition to other cultural festivities throughout the year. Richardplatz is a socially edifying focal point of Neukölln that acts as a talisman of history while also propelling itself into the future. 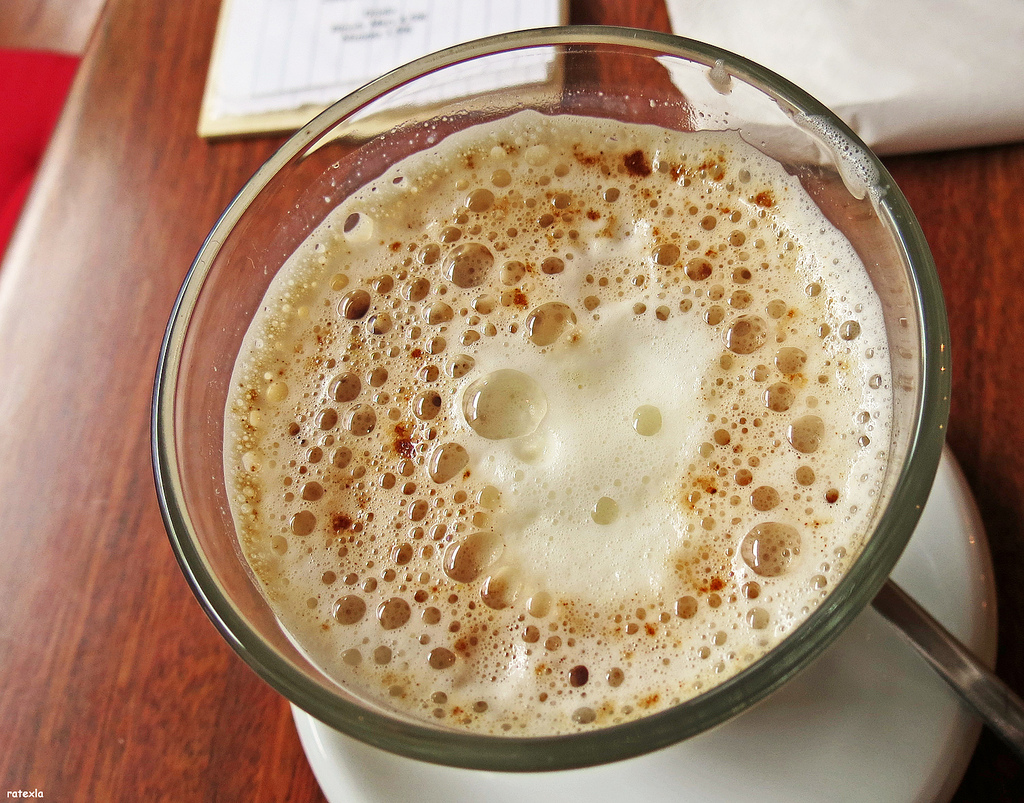 For those who are often plagued with the decision whether to shop or eat, there’s a rescue remedy out there that doesn’t involve a laptop. This dual concept vintage store-café caters to the needs of the hungry and the fashion frenzied. The visionaries behind this store spent time behind some impressive desks and wanted to move to Berlin like the rest of the creative pioneers to pursue their passions, which just happened to be baked goods and fashion. Neukölln boasts an array of quality vintage clothing stores, but Sing Blackbird is a shop that takes the vintage shopping experience in a unique direction. The clothes are color coordinated and pleasantly spaced out, which is a departure from the normative way of vintage clothing shopping where everything is so on top of one another it feels like the line for the burgeramt. The pristine atmosphere, the niche clothing selection and the omnipresent promise of baked goods makes this place a can’t-miss when strolling through Neukölln.