Top 10 Things to Do and See in Lübeck 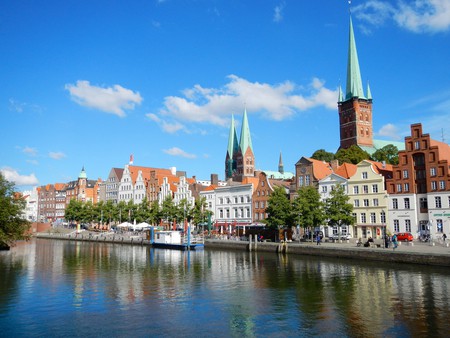 Even though Lübeck‘s old town is on the list of UNESCO World Heritage Sites, this city in Germany’s north is often overlooked – yet a trip here means no end of delights, including gabled townhouses, picturesque courtyards and medieval churches. Here’s a list of the top 10 things to do and see when you’re in town.

Built in 1464, the iconic city gate is a relic of Lübeck’s mercantile days. The red-brick landmark still stands proud, its pointed cylindrical towers slightly leaning inward and golden Latin letters proclaiming ‘harmony within and peace abroad’ (‘concordia domi foris pax’) are carved into the stone above the passageway. The Holstentor marks the western end of the former borders of the Hanseatic city and today houses a museum dedicated to Lübeck’s medieval past. 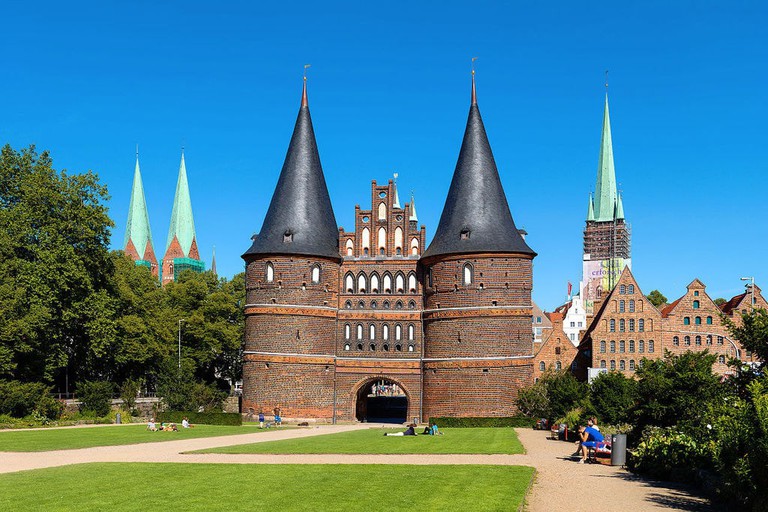 The European Hansemuseum is dedicated to the life, influence and downfall of the Hanseatic League, an influential trade group that was established in 1385. Powerful individuals, piracy, wars, trade boycotts and the plague epidemic shaped the time of its operation. Original exhibits, historical scenes and interactive displays show the stages of the union in the Hanse cities of Lübeck, Novgorod, Bruges, Bergen and London. 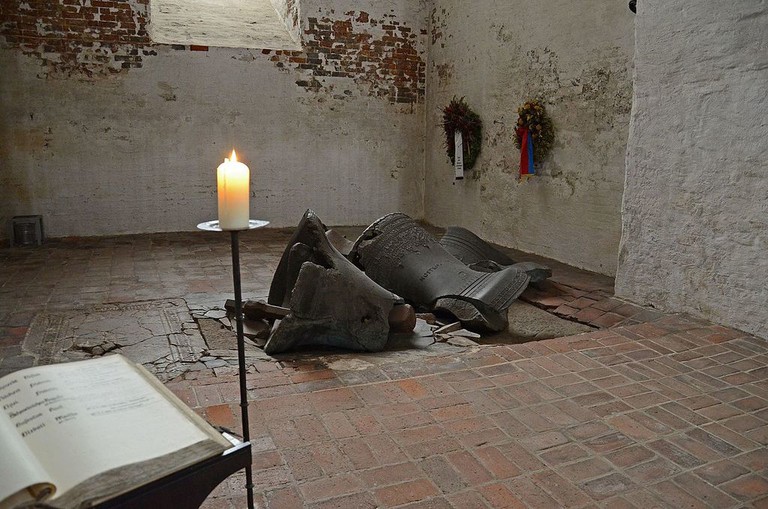 Marienkirche | © Soluvo / WikiCommons
Seven Gothic church towers punctuate the skyline of Lübeck and have earned the city its tagline City of the Seven Spires. St. Mary’s (Marienkirche) is Germany’s third-largest church, but the intricate details are what fascinates people rather than the sheer size and height of the brick-vaulted roof. Two church bells that were brought down by Allied bombs lie broken on the ground where they fell in 1942, and a large stained window pays homage to the 15th-century Dance of Death painting that was destroyed in the same attack.

Thomas Mann, one of Germany’s great novelists, was born in Lübeck in 1875 to a bourgeois family. His first novel, The Buddenbrocks, chronicling the decline of a wealthy Lübeck merchant family, was a huge literary success. Mann went on to win the Nobel Prize for Literature in 1929, and his family home was converted into the Buddenbrock museum. The exhibition is dedicated to the life and works of Thomas Mann and his brother and fellow writer Heinrich Mann.

The historic four-masted sailing ship is one of the last surviving windjammers, and the onboard exhibition tells of the captivating story of its journey. The Passat (‘trade wind’) was one of the 1911 legendary Flying P-liner vessels and in its 46-year long operation sailed across the world carrying cargo from wheat to guano and circumnavigated Cape Horn no less than 39 times. Today, the barque is a protected landmark and anchored at the Travemünde harbour, approximately 25 kilometres (15.5 miles) outside of Lübeck. 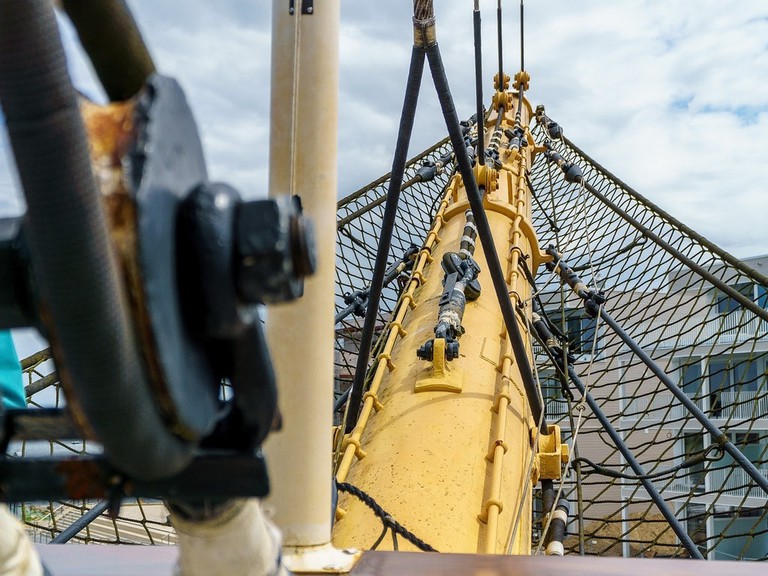 Details of the Passat | © WaldNob / Pixabay

The historic landmark is one of the world’s oldest social institutions. Inspired by the Santo Spirito in Sassia in Rome, the hospital opened its doors in 1286. It was later repurposed as a retirement home and used as such until the 1960s. The red-brick facade is quite an eyecatcher, but it’s worth stepping inside the historical building and tour the vaulted halls. The building is open year-round and occasionally hosts arts and craft fairs and an annual Christmas market in December.

Just like champagne and Gouda cheese, Lübeck marzipan is protected by the European Union as a geographic indication. Needless to say, the sweet treat makes for the perfect gift. The Café Niederegger flagship store sells marzipan in all shapes and forms, from figures to liquor and coffee. Next door, the café dishes up incredible marzipan-based cake creations – it’s worth staying for a slice of Prince Heinrich and a cup of coffee. 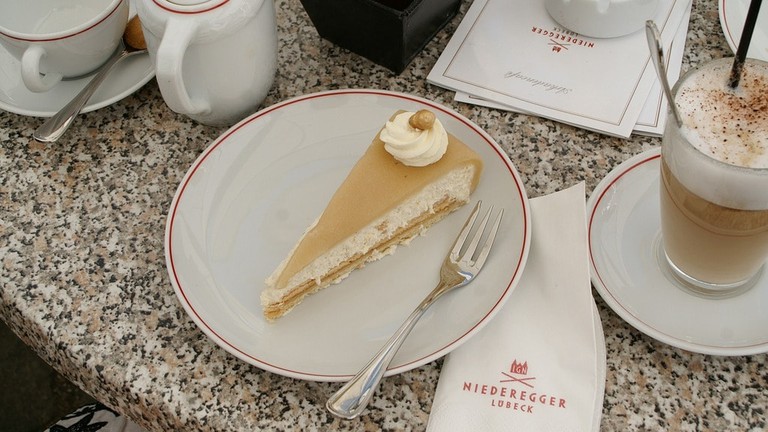 Enjoy cake and a coffee I © hakelbudel / Pixabay

Thomas Mann is not the only literary figure rooted in Lübeck. Günter Grass, the critically-acclaimed writer of German post-war literature spent the last 30 years of his life just outside of the city. His 1959 debut novel Die Blechtrommel (The Tin Drum) gave him his break and contributed to his win of the 1999 Nobel Prize for Literature, but Grass was also a dedicated artist. The museum is filled with his sculptures, drawings and manuscripts. 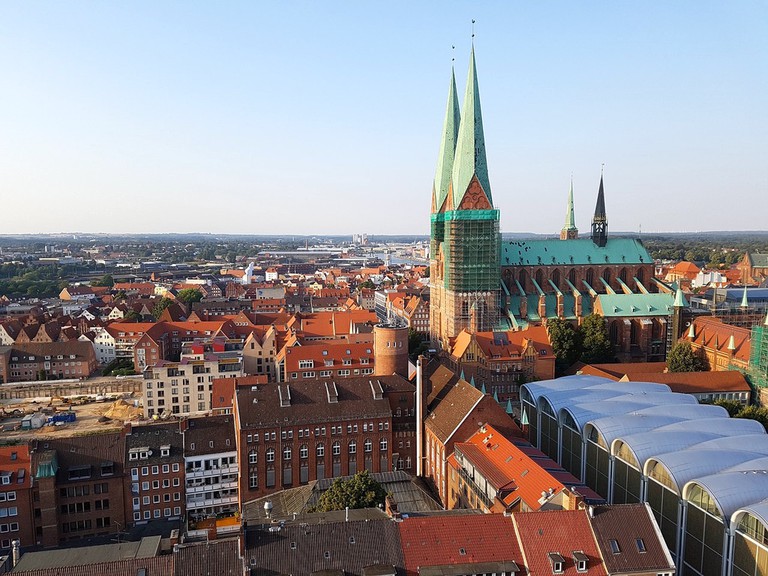 View from the St Petri tower | © KarinKarin / Pixabay
Clad in red bricks, the facade of St Peter’s Church is a stark contrast to the light-flooded interior of white walls and columns. The church looks back on more than 800 years of history and even though it hosts traditional services, it’s also a cultural space for concerts, lectures, art exhibitions and more. For panoramic views of Lübeck, take the elevator up to the viewing platform in the steeple.

A 30-minute drive brings you to this beautiful Baltic Sea beach. Whether you want to amble along the pedestrianised seaside promenade, go for a swim or watch the waves over dinner from one of the restaurants, it’s good to get out of the city and catch a breath of fresh air. On the weekends, events ranging from volleyball tournaments and yoga classes to open-air concerts and light shows are scheduled for throughout the year.