10 Things You Should Know About Thomas Struth 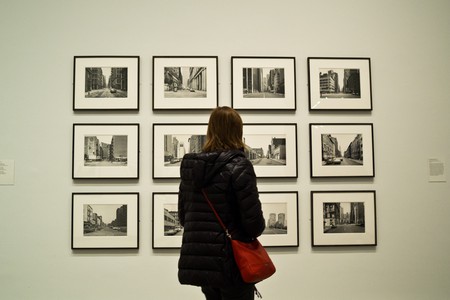 Thomas Struth is fast becoming one of the most influential artists in modern photography. He has photographed cities ranging from his native Düsseldorf to Tokyo, New York and Rome. Later becoming famous for his family portraits, he has photographed families from all over the world including Queen Elizabeth II and the Duke of Edinburgh in 2011. We explore ten things you should know about Thomas Struth. 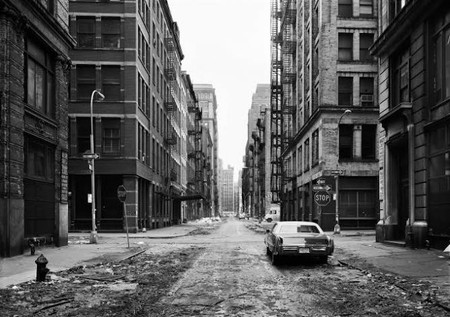 Struth was originally a painter

Born in Geldern, Germany, in 1954, Thomas Struth studied at the Kunstakademie Düsseldorf between 1973 and 1980. Though he has become famous for his photographs, Struth originally studied to be a painter. The influence of his initial interest in painting is clearly event in the composition of his photographs and the subject matter for his later projects. His Museum Photographs are particularly demonstrative of his passion for painting, whilst his family portraits are reminiscent of Renaissance portraiture. 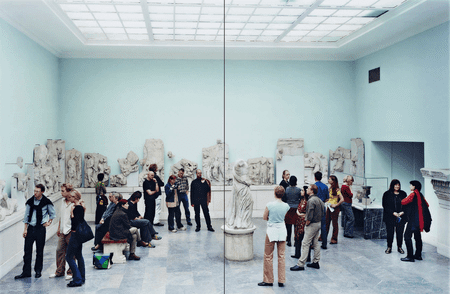 Based on the subjects and style of his paintings, Struth’s professor Gerhard Richter encouraged him to enroll in the Kunstakademie’s new photography class, taught by Bernd and Hilla Becher. Playing with an emerging artistic medium, the Becher’s students – including Struth, Thomas Ruff, Candida Höffer and Andreas Gursky – became big names in modern German photography. The Becher’s themselves are credited for leading the development of modern European photography with their fascination in aging industrial structures of Germany’s past. They greatly encouraged Struth’s interest in photography as a medium for exploring subjects in an interdisciplinary manner. Their works also had a marked impact on Struth’s initial series of photographs and his later series on modern industrial architecture.

Cityscapes: Linking the subject to the historical context

Struth’s first photographs were predominately of empty cityscapes in Düsseldorf. Though the streets he selected may seem unremarkable at first, Struth was attempting to document the emergence of post-war urban city structures in Germany. These early works can be viewed as a social and political analysis of the particular time and place in which the photographs were taken, thereby emphasizing the connection between the individual and the historical context they inhabit. The Düsseldorf photographs particularly demonstrated the impact of the war on German cityscapes, focusing on the individuals living in a post-war context. Struth later went onto photograph cityscapes in Edinburgh, New York, Rome and Tokyo, each focusing on different social, political and historical factors evident in these photos. 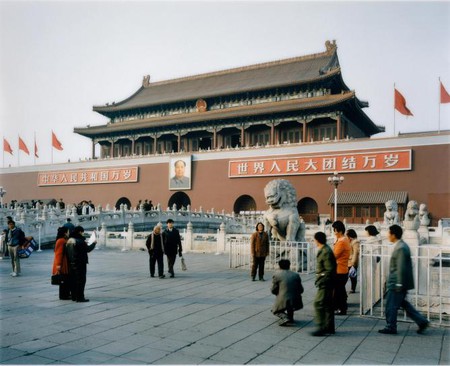 Departing from his strict focus on cities and urban spaces, Struth began a series of family photographs in the 1980s. This work was largely influenced by a research project he conducted with psychoanalyst Ingo Hartmann in 1982. Hartmann had previously begun analyzing the family photographs of his patients believing they could give him a deeper look into their personal lives and psyche. The project sparked Struth’s interest in the historical, social and psychological aspects that can be inferred from family photographs. As such, this was also a personal project for Struth. Born in post-war Germany, many people of his generation grew up questioning the role of their families. For Struth, this project was more than artwork – it was also a study into the underlying social and contextual elements influencing the family unit at that particular point in time.

Later in his career, Struth began a new project which converged his past influences. In his Museum Photographs, Struth began capturing images of tourists visiting famous works of art, from the Louvre to the Vatican. In these photographs, Struth was able to encompass his past interests into one image, allowing the viewer to analyze the photographs from different perspectives. Combining his passion for painting with his interest in space and time, his photographs question the idea of the modern museum – are museums the place where art goes to die? Or do they find new life through the interplay of onlookers? Furthermore, the juxtaposition of the modern tourists in front of the historic paintings raises questions about the concept of time. Finally, the photograph asks what conclusions can be draw about the spectator viewing a photograph in a museum that depicts others viewing a painting in a museum? 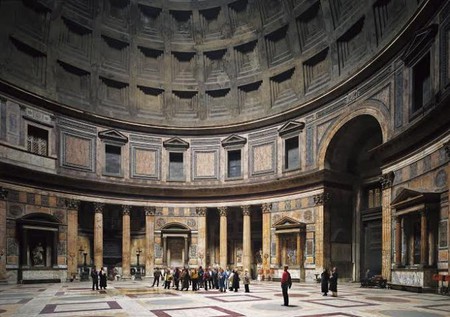 Influenced by this previous work, Struth captured a new series of photographs in 2004. This time, instead of having the famous artwork at the center of the picture, photographs were taken from the perspective of Michelangelo’s ‘David’. By focusing on the faces of the spectators, the museum experience is again shown from a different perspective. With these photographs, it is possible to view a range of different emotions on the faces of the audience – emotions evoked by the artwork alone. It thereby captures the psychological impact of the work as it is seen in that specific point in time. Similarly, he also took a series of photographs from the perspective of Leonardo Da Vinci’s ‘Madonna with a Flower’ in the Hermitage Museum. 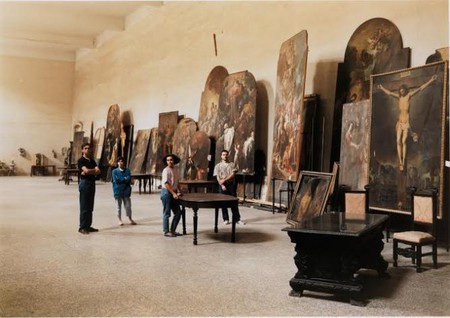 The Restorers at San Lorenzo Maggiore, Naples | Courtesy of the MET Museum

In another series of photographs Struth began to explore a new interest in religious worship. Beginning with pictures of the San Zaccaria in Venice, Struth began photographing religious figures and cathedrals everywhere from Paris to Lima. In these photographs, he was interested in demonstrating the emotion and reactions of individuals to religious places and artworks, highlighting the imposing iconic power of religious sights such as the Notre Dame in Paris. Along with cathedrals, temples and churches he also took photographs of ‘secular places of worship’ including the portrait of Mao Zedong in Tiananmen Square and a giant advert in Times Square. Comparing the reactions of tourists to religious sights and museums again raises questions of the what psychological impact these places and artworks have on individuals.

In 1990, Struth was commissioned to take photographs for patients’ rooms in a private hospital in Zurich. Keeping in mind the place and the purpose his photographs would occupy, the resulting images took on a new direction. Instead of looking to his past and personal influences, Struth asked himself what his audience, the hospital’s patients would be missing from the outside world. This led Struth to focus on close ups of flowers and natural landscapes. His individual photographs of cherry blossoms, sunflowers, violets, tulips and roses demonstrated a sensitive treatment of the subject, focusing on one individual flower and enhancing the color whilst gently fading the background. A book containing these photographs entitled the Dandelion Room was published in 2001. 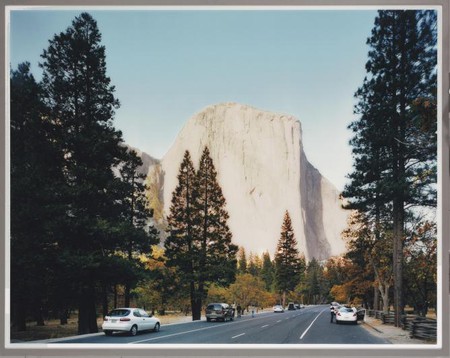 In his New Pictures from Paradise series, Struth again took nature as his subject. For Struth the most important part of this series was not necessarily to draw attention to political, psychological or social factors represented in his photographs. By encircling the viewer with complex photographs of jungles and forests in Japan, Peru, Australia and Germany, Struth attempts to transport his viewers into a realm of quiet self-contemplation. This greatly diverges from his Museum Photographs, which drew attention to the emotions of others.

Struth’s latest works focus on science, technology and the human imagination. This series began after his first visits to South Korea where he began photographing the DSME shipyard. This expanded to photographs of the Kennedy Space Center in Florida and other centers for research and technology in Germany, Greece, Argentina, North and South Korea, Israel, Scotland and the US. Among these, he also included photographs of Disneyland in California as an example of human imagination. His focus on modern industrial works bare a resemblance to those of his early professors Bernd and Hilla Becher, yet when looking at photos such as the imposing Semi Submersible Rig in the South Korean shipyard, one can’t help but recall the powerful looming presence of Notre Dame from his ‘Places of Worship’ series. Unlike his street photographs in Düsseldorf, they do not mark a historical comparison but stand as documentation of the height of contemporary technological innovation.