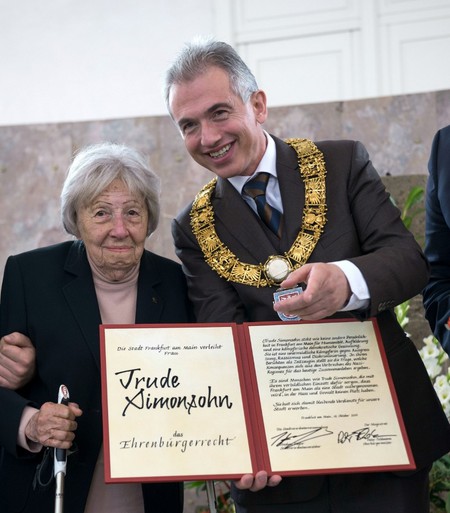 To be awarded honorary citizenship is the highest honor a person can be granted in Frankfurt. Last weekend, this accolade was awarded to someone different to her predecessors. Trude Simonsohn, a 95-year-old woman and Holocaust survivor, became the first female ever to receive the award.

Simonsohn was born of Jewish parents in present day Czech Republic in 1921. After the Nazis annexed Czechoslovakia, Simonsohn was sent to the Theresienstadt ghetto, subjected to months of solitary confinement, and ultimately deported to Auschwitz in 1944. She was separated from her family members, including her parents who were ultimately killed in camps during the Holocaust. 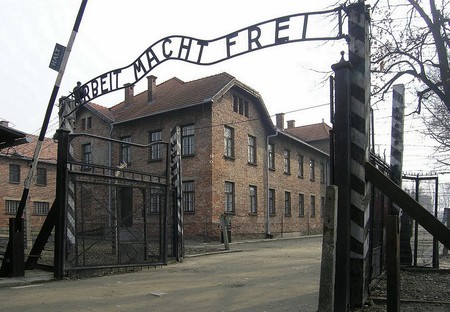 Her time in the death camps occurred while she was a young woman, and Simonsohn has spent many years working as a valuable witness to the deportations of Jews to the camps, as she is one of the few survivors old enough to remember this harrowing process. Furthermore, in the years after the war, she and her husband worked with Jewish refugees, orphans, and other survivors of the camps, ultimately relocating to Frankfurt in 1955, where she has remained for the past 60 years.

Despite the horrors of recollecting these difficult times, Simonsohn has volunteered her experiences, thus acting as an important contributor to society and history for over 40 years. She has spoken at countless youth groups, universities and other educational institutions, working extensively to combat racism, anti-Semitism, and other forms of societal exclusion. She has also become an important leader in Frankfurt’s Jewish community. For example, she worked as chair on the board for the Jewish Community for Social Work for 12 years, and was featured in a podcast titled, Trude Simonsohn: Why Did I Survive? and in a documentary about her life by Peter de Leuw and Martin Böttner. 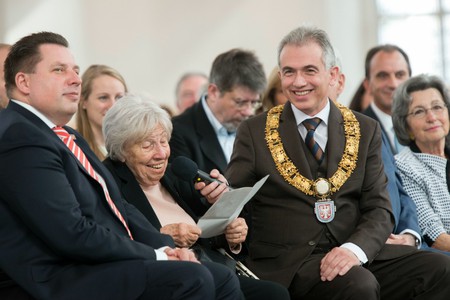 These continual acts of service and self-sacrifice are what have prompted Frankfurt’s city officials to award Simonsohn with this honor, presented at a special ceremony on Sunday, October 16th. The fact that she is a woman is particularly remarkable, considering it is the first time in the award’s 221-year history that the honor wasn’t granted to a man. Not to mention, only 30 people in total have even received it at all. Ironically, Adolf Hitler himself was awarded honorary citizenship in Frankfurt during the reign of the Third Reich. Of course, he and multiple other Nazis have since been removed from the list of awardees.

Indeed, Simonsohn is an inspiration to all, defiantly speaking out against the cruelty she has experienced, despite how troubling these acts were intended to be, serving as a memorable historical example that hatred will never triumph.

A photo posted by Stephan Franz Ferdinand (@franzferdinandphotography) on Apr 14, 2016 at 12:35pm PDT