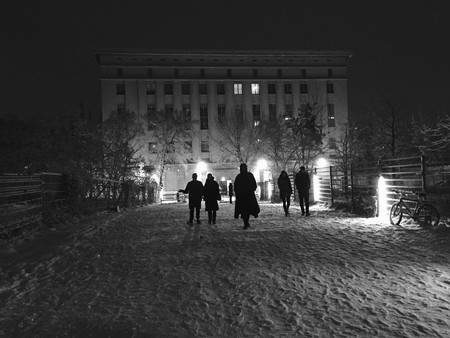 Straddling the border of Kreuzberg and Friedrichshain, lies the world’s most infamous nightclub, Berghain. Housed in an old power plant and shrouded in mystery, the strict door policy, the murmurs of wild sexual adventures and fetish infused exploits, where the only serious crime is having your camera phone out, Berghain has made club history. From 90s rave classics to pounding industrial assaults, here are some of the most loved tracks played in Berlin’s infamous techno temple.

Berghain residents such as Ben Klock and Marcel Detmann have become icons of the industry, growing a wave of raw, warehouse techno that has garnered a cult following in the city. It’s really not an over statement to say that many Berlin inhabitants involved in the techno nightlife scene live for Berghain; that is to say, three nights a week, from midnight Saturday until about noon on Monday. People from other European cities come to Berlin specifically for the Berghain experience and know not to bother looking for accommodation, rather making the club their home.

The club is especially praised for its quality artist curation. A DJ or producer knows they are in the game when they get booked to play Berghain. Only the top DJs get to bang out the darkest, deepest, drum-heavy industrial techno that is the characteristic throbbing sound of the sexy, sweaty, dark and daring dance floor.

Standing among hundreds of sweaty bodies in the dark, the dance floor in Berghain is a highly sexualised, even animalistic experience. The subwoofers are as tall as two men and the music pulsates throughout your entire body. Simply put, there is no other sound system or weekly ritual in the world of its kind. It’s too loud for conversation, so people come purely to rave, to express without words, to touch and to let go.

Berghain is without a doubt the most talked about club in the world. Love it or hate it (usually if you’ve never been), entire websites are dedicated to every element of its culture, from the dress code to the music. Facebook has a group where people can post music they’ve heard on the weekend, and one guy even took the time to analyse the clubs DJ listings from the last seven years to create statistical data on the top DJs and songs to frequent the club. That’s commitment!