The Top Literary Landmarks To Visit In Berlin

© color line/Flickr
When most people think of Berlin, they think of a place that was ravaged in World War II and divided during the Cold War. Yet, this city has a long history of playing host not only to artists and musicians, but to many of the world’s greatest writers and thinkers. Indeed, Kafka, Nabakov, Walser, Brecht, and many others spent critical years of their careers in Germany’s capital. Beyond places like Berlin Wall, Alexanderplatz, and the Bahnhof Zoo, here are eight of Berlin’s most fascinating literary landmarks.

Christopher Isherwood is one of the best-known English-speaking writers to reside in Berlin in the final heyday of the Weimar Republic. His final novel, Goodbye to Berlin, as part of the larger work, The Berlin Stories, was a semi-autobiographical tale about the lives of a cabaret singer, a gay couple, and a Jewish heiress as Nazism descended over Germany. The famed novel inspired the outrageously popular musical Cabaret. The Isherwood Walking Tour is a one-hour exploration of the old stomping grounds of Isherwood, primarily located throughout the Nollendorfplatz area. One of the highlights of the tour is the apartment Isherwood shared with Jean Ross, the cabaret singer who inspired the famous character of Sally Bowles. 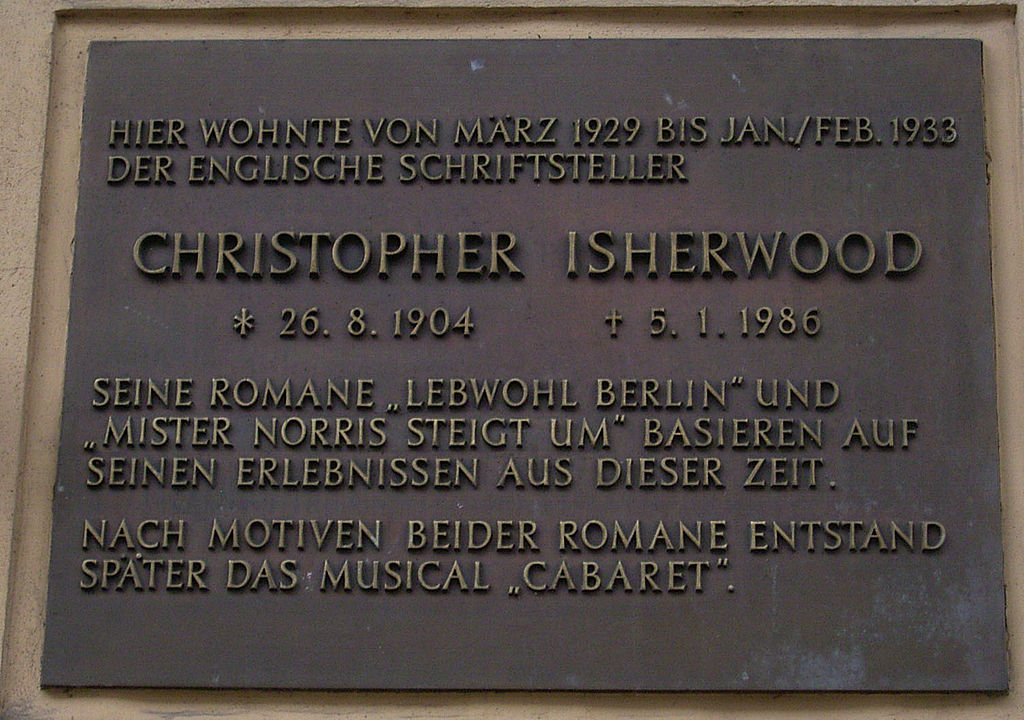 Museum, Art Gallery, School, Memorial
Bertolt-Brecht-Haus | © Beek100/WikiCommons
Founded by his wife, Helene Weigel, and housed in his legendary apartment on Chausseestraße in Mitte is the Bertolt Brecht Center and Museum. The space, which Brecht described as a ‘jolly roomy apartment,’ was his home from 1953 until his death in 1956. The adjoining rooms were where he gave instruction to his pupils. Now, the apartment contains the remains of Brecht’s personal library, consisting of 4,000 books. Today it is possible to take guided tours of the apartment, where several rooms have been maintained in their original conditions. The Bertolt Brecht Center and Museum is also adjacent to the Dorotheenstädtischen cemetery where the famous writer is buried.
More Info
Open In Google Maps
125 Chausseestraße, Mitte Berlin, Berlin, 10115, Germany
+4930200571844
View menu
Visit website
Visit Facebook page
Send an Email
Give us feedback

The famed writer, philosopher, critic, and social commentator Walter Benjamin once resided in Berlin before fleeing from the Nazis and ultimately committing suicide to avoid being accosted by the Gestapo in 1940. Now, if one would like to pay homage to this renowned thinker, it is possible to visit his home on Prinzregentstraße in Wilmersdorf. It is demarcated by a plaque, which is inscribed with details about his life’s work. Additionally, the Walter Benjamin Archives in Mitte includes 12,000 manuscripts of his work and exists as part of the city’s Academy of the Arts. 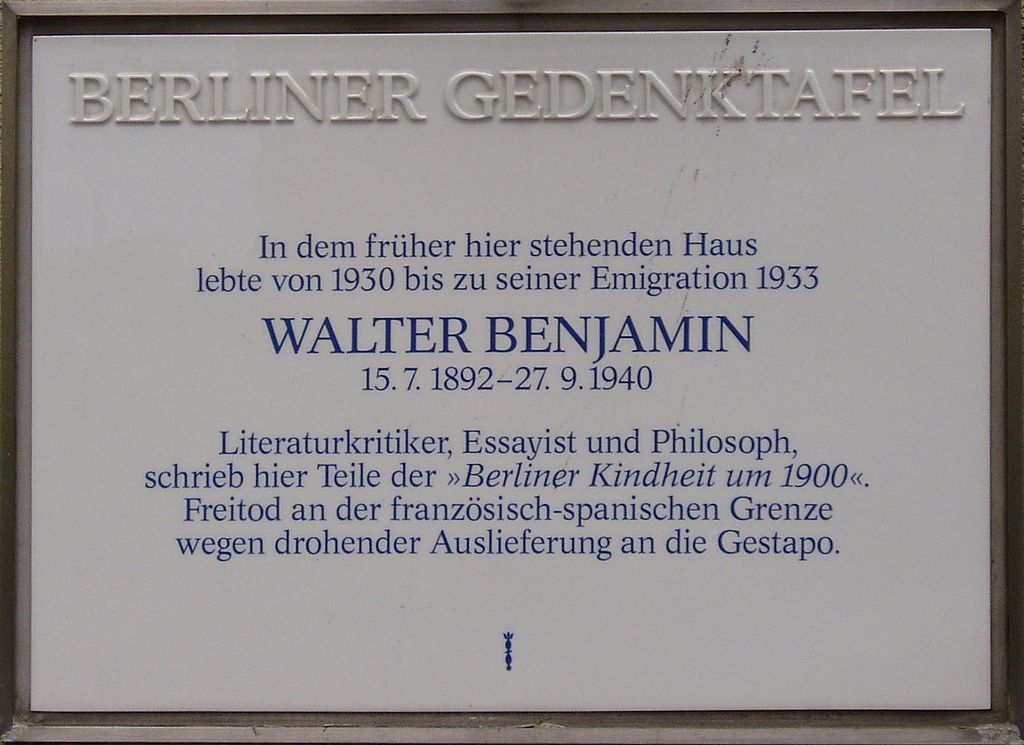 Building, Library, Museum
Literary Colloquium Berlin e.V., Berlin | © Fridolin freudenfett (Peter Kuley)/WikiCommons
Established in 1963, the Literary Colloquium Berlin is the city’s premier literary center and museum. Situated on the Wannsee River in a lovely old red brick building, it offers the perfect serene escape for enveloping oneself in the splendid work of reading and writing great literature. It is host to think tanks, symposiums, workshops, and readings by renowned authors. All the big names in the literary business who come to Berlin are known to stop here, including publishers, journalists, authors, and practicing bibliophiles of all kinds. This is the ideal place to engage in literary interchange in Germany’s capital.
More Info
Open In Google Maps
5 Am Sandwerder, Bezirk Steglitz-Zehlendorf Berlin, Berlin, 14109, Germany
+49308169960
View menu
Visit website
Visit Facebook page
Send an Email
Give us feedback

While much of the area was destroyed in the bombings that transpired during World War II, parts of Berlin, particularly around Ku’damm and Potsdamer Platz, were highly popular with artists, writers, and musicians. Even after the war, the western portion of the city regained some of this culture. For instance, Henry Miller, the American author, was known to spend a good deal of time at the Savoy Hotel, which still remains to this day. It is even possible to stay in a suite named after his famous novel, Tropic of Cancer. Thomas Mann was also known to hang around here.

Cemetery
Dorotheenstadt cemetery, Berlin | © Daderot/WikiCommons
While it’s a morbid sentiment, one of the best ways to get up close and personal with the famed literary figures of Berlin’s past is to visit them at the cemetery. Dorotheenstädtischen Friedhof, in particular, is known to be the final resting place of many acclaimed writers. The graves of Bertolt Brecht, Christa Wolf, Heiner Müller, and Heinrich Mann can all be found here. Additionally, several notable philosophers including Georg Wilhelm Friedrich Hegel are buried here as well. Plus, Brecht’s former home is located within sight of the cemetery.
More Info
Open In Google Maps
126 Chausseestraße, Mitte Berlin, Berlin, 10115, Germany
+49304617279
View menu
Visit website
Visit Facebook page
Send an Email
Give us feedback

Building, Historical Landmark
Bebelplatz, Unter den Linden | © Asiir (talk | contribs)/WikiCommons
Bebelplatz is a literary landmark, not because of the important inspiration to novelists that it harbors, but rather, for the books that it lacks. In fact, Bebelplatz was the site of the Nazi’s largest book burning purges on the infamous night of May 10, 1933. Indeed, 20,000 books were burned here, including novels by greats like Hemingway and Alfred Döblin, among many others. Today, a window exists in the ground below where people can peer down to a room filled with empty bookshelves, with vacant space for the 20,000 lost books. This display is accompanied with a plaque that reads the famous quote of Heinrich Heine, ‘Dort, wo man Bücher verbrennt, verbrennt man am Ende auch Menschen.’ In English, the quote means, ‘Where they burn books, they will in the end also burn people.’
More Info
Open In Google Maps
Unter den Linden, Mitte Berlin, Berlin, 10117, Germany
View menu
Visit website
Visit Facebook page
Send an Email
Give us feedback

Library, University
Jacob-und-Wilhelm-Grimm-Zentrum, Berlin | © Huuboa/WikiCommons
No talk of German literature would be complete without at least mentioning the Brothers Grimm. Berliners thought so, too, when they decided to name a library after them in commemoration of their time spent in the city, creating what would ultimately become the first German dictionary. Amidst the Grimm Zentrum Library’s collection, which is two million novels strong, exist many books that once belonged to the brothers. Compete with the hoards of students from Humboldt University for a seat in the modern multistory center reading room in order to get the full experience of what the library has to offer. Grimm enthusiasts can also visit the graves of the Brothers Grimm at a cemetery in Schöneberg.
More Info
Open In Google Maps
1-3 Geschwister-Scholl-Straße, Mitte Berlin, Berlin, 10117, Germany
+4930209399370
View menu
Visit website
Visit Facebook page
Send an Email
Give us feedback
Give us feedback