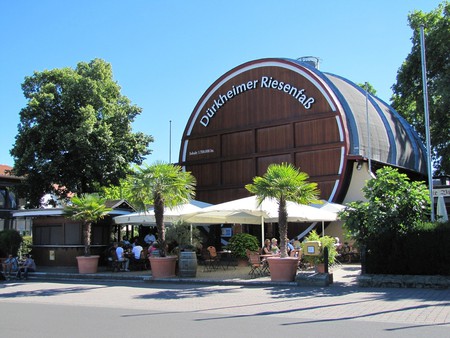 It’s no secret that Germany’s Palatinate region is up there with the top wine regions. One of the best ways to explore the region is to follow the 85-kilometre-long Wine Route between the villages of Schweigen-Rechtenbach and Bockenheim. Besides the beautiful scenery, you will get a chance to stop at some of Germany’s best vineyards, vantage points, historical monuments, ruins and castles. Here are the top ten things to do and see along the way.

Since 1936, the German Wine Gate marks the southern end of the Wine Route in Schweigen-Rechtenbach. When wine prices plummeted after an above-average vintage in 1934, the Wine Route and the gate with it were created it in an attempt to promote the wine region and spur the economy. Today it’s a popular tourist attraction, and the on-site restaurant is the perfect spot for your first glass of wine en-route.

Neustadt might be the dreamiest town along the Wine Route – cobblestoned streets, timber-framed houses and vineyards all around exude a nostalgic atmosphere. The town offers Michelin-starred restaurants hidden in cosy vaulted cellar rooms and, of course, a number of wine bars that serve award-winning Rieslings by the glass. 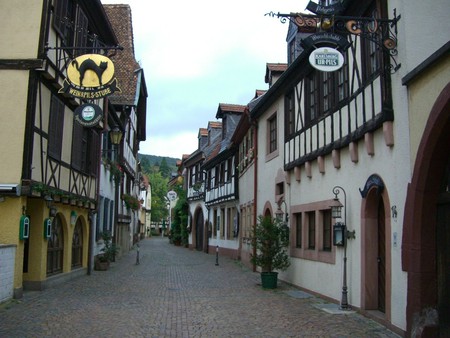 Once a summer residence of Ludwig I of Bavaria, this beautiful villa near Edenkoben is one of the not-to-miss sights along the route. As a fan of Italian architecture, Ludwig I specifically asked for his new country house to be built in an Italian style. Backed by the Palatinate forest and surrounded by vineyards, the four-wing mansion along with the twin-storey loggia does spread a hint of a Tuscan flair. Guided tours of the estate are available if you’re interested in learning more, otherwise, you can go off and explore the villa on your own.

Just south of Landau, you find the ruins of a former knight’s castle. The tumbling walls trace back to the early 1200s and today provide the backdrop for medieval markets and other cultural events. A small restaurant provides food and drinks year-round to those who come here for the panoramic views from the tower and the small archaeological exhibition. 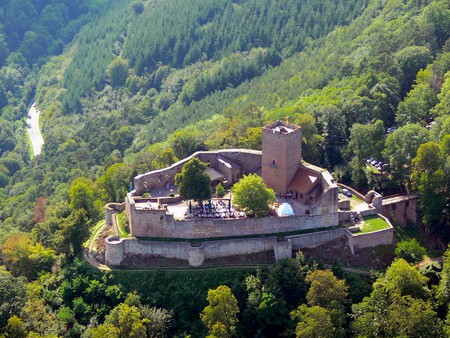 Winemaking was introduced to the region by the Romans more than 2,000 years ago. A relic of that time is the Roman vineyard in Bad Dürkheim that was unearthed by archaeologists in 1981. The site encompasses the remains of a large manor house, an antique wine press, a cemetery, a bathhouse and several other buildings. If you want to explore the complex, a guided tour is a great way to do it.

Perched on a hill near Neustadt an der Weinstraße sits Hambach Castle – a definite must-see when you’re in the region. The 11th-century castle is one the most important symbols of German democracy. This association goes back to the 1832 Hambach Festival, when members of the public marched on the castle demanding unity and freedom – a milestone event in the country’s democratic history. Today, the castle houses a fascinating museum about the event and its consequences. 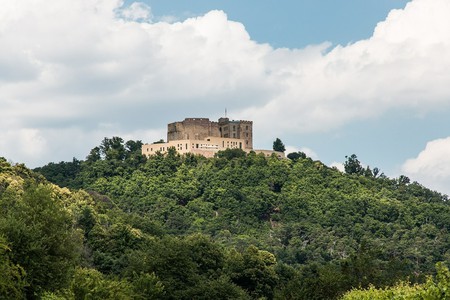 The ruins of the Roman Villa Rustica in Wachenheim were discovered by pure chance in 1980. Archaeological findings date the origin of the country estate back to 20 AD and have shown that the complex continuously grew over the following centuries. Back then, the estate was composed of a large main building, two bathhouses equipped with the Roman predecessor model of an underfloor heating system, and a cemetery.

Bad Dürkheim is to wine connoisseurs what Munich is to beer fans. Every year in September, the tranquil village hosts the world’s largest wine festival. The Wurstmarkt has little to do with German sausages but rather sees winemakers and drinkers from the region flock to Bad Dürkheim for days worth of chinking glasses, wine and food pairings, fairground rides and fireworks. If you’re not here for the festivities, it’s still worth stopping at giant wine cask for a wine tasting and lunch.

The name means as much as House of the German Wine Route and has marked the northern end of the tourist route in Bockenheim since 1995. The somewhat oddly shaped house with its wood-panelled façade and roof beams resemble a Roman fort. The upstairs restaurant spans across the entire road and gives views of the lake behind. On the menu are an abundance of regional specialities – and, of course, plenty of wines to choose from.

Landau is a picturesque wine village, halfway between Speyer and the cute French town of Wissembourg. For people who travel the entirety of the Wine Route, Landau is the perfect stopover to explore more of the region and indulge in some of the great food and wine the Palatinate has to offer. The historic city centre is dotted with romantic taverns, cafés, top-notch restaurants, speciality shops and boutiques.

© hpgruesen / Pixabay
Give us feedback