The Top 10 Things to Do in Tübingen, Germany

Though Tübingen’s pastel-coloured gabled houses and cobbled streets lend it a medieval atmosphere, it’s also a buzzing university city with vibrant energy. We’ve summed up the best ways to experience everything this charming spot has to offer – read on for the best experiences around.

Travel back to the Middle Ages

Tübingen’s most prominent sight is the hilltop Hohentübingen Castle. Though the structure is rooted as far back as 1037, the building was amended, extended and enlarged heavily, and today’s appearance is a mix of a medieval fortress and modern period castle. The circular keep and the red-shingled roof blends in perfectly with the old town cityscape below. Much of the complex is now occupied by the city’s university and several museums, but we’ll get to that.

Sail down the Neckar River

If you’ve been to Oxford, Cambridge or Canterbury in the UK, the views of the Neckar River might stir up a feeling of familiarity. The purling stream cuts through the old town and occasionally weeping willows dip their branches into the water. The already idyllic and somewhat romantic setting is only further emphasised by wooden punts that sail up and down the river. If you want to join the boating fun, you can buy tickets for a guided trip at the tourist office. Punting has a long tradition here and once a year the local student fraternities compete in a joyous regatta. 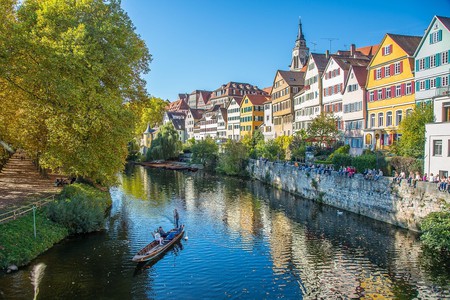 See some of the oldest artworks created by humans

In the 1860s, archaeologists dug up musical instruments and small decorative figurines carved from mammoth ivory in six caves of the Swabian Albs. Among them were carved figures depicting horses, mammoths, cave lions and other animals dating from 43,000 years ago. The Ice Age artworks are believed to be the oldest man-made figurative art ever found and have revealed much about how humans developed artistry. Some of the artefacts are on display at the Ancient Culture Museum.

Wander around the complex of Bebenhausen Abbey

North of Tübingen’s city centre lies the beautiful Bebenhausen Abbey – a must-see if you’re in town. Count Rudolph I of Tübingen founded the abbey in 1183, but after the Reformation, the buildings were used first as a school, then as a hunting lodge for the royal Württemberg family, and finally as the seat of the state parliament. Today, guided tours reveal much of the long history and take you around the historic complex. Among the highlights of each tour are the Gothic-style abbey church, the lavishly decorated royal bathrooms and the cloistered courtyard. 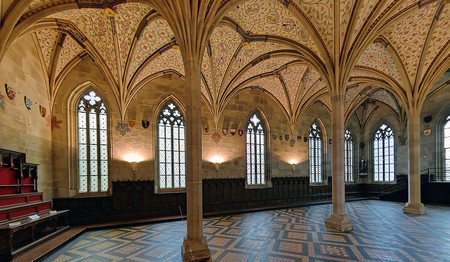 Mingle with locals in the market square

The everyday hustle and bustle of Tübingen is centred around the market square. Locals come here to shop groceries at the farmers’ market, chat over coffee at one of the cafés and in the summer evenings, students flock to the square for a late-night drink. If you take a closer look at the picturesque townhouses which encircle the plaza, you can discover interesting details – the astronomical clock which embellishes the facade of the old town for one.

Approximately 35 kilometres (22 miles) east of Tübingen lies the enchanting village of Bad Urach. Nestled at the foothills of the Swabian Albs, the spa town lures with thermal baths, hiking trails, a waterfall and a picture-perfect town centre composed of winding alleys and half-timbered houses. The well-preserved old town is the reason that the town is a unique spot along Germany’s Timber-Frame Road. 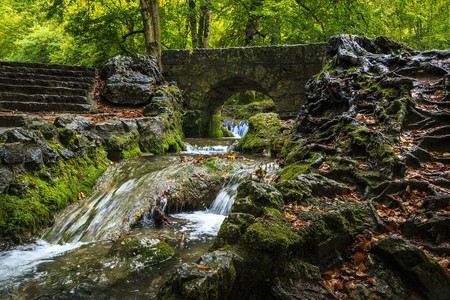 Chill out at a beer garden

The Neckarmüller restaurant occupies one of the city’s premium spots. There’s hardly a better place to enjoy a chilled glass of beer or wine in the late afternoon than in their beer garden, which is open from May to the end of September. Trying one of the in-house brews is a must, and makes for the perfect drink to enjoy the pretty views of the Neckar River and the colourful townhouses alongside it, including the Hölderlinturm tower.

Swabian cuisine is known for down-to-earth and hearty meals, and a number of its recipes have conquered German hearts beyond the state borders. The Wurstküche restaurant is a good place to stop by and indulge in the local culinary highlights. Keep your eyes peeled for Maultaschen, which are Swabian-style dumplings stuffed with meat, spinach and onions, or Käsespätzle, which is best described as a German take on mac and cheese. 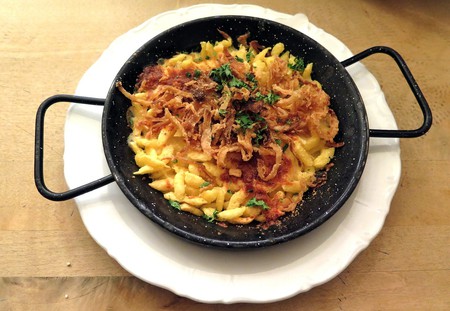 Check out the chocolate festival

Once a year, when the ChocolArt festival comes to town in early December, Tübingen becomes the epicentre of culinary indulgence. Germany’s largest chocolate festival draws more than 270,000 visitors to the city who come to enjoy chocolate specialities from all over the world. While vendors present truffles, pralines, large chocolate bars and other delicacies at their stalls in the old town, a cultural programme revolving around music, art and performance celebrates the ‘sacredness of chocolate’ that was described by the ancient Mayan culture.

Marvel at the ecclesial art of the Stiftskirche

The soaring tower of Tübingen’s St. George’s Collegiate Church punctuates the sky at the heart of the old town and is, alongside Hohentübigen Castle, the city’s most prominent landmark. Visitors can climb the 170 steps to the top to enjoy panoramic views of the city. The 15th-century walls hold more things to see inside, including the beautiful stained glass windows and beautifully-embellished burial places in the chancel. 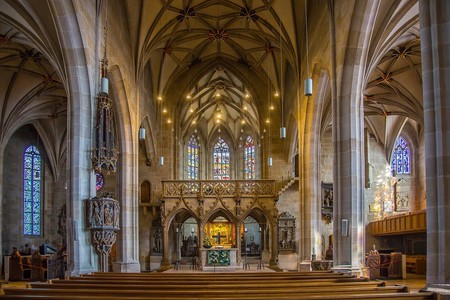