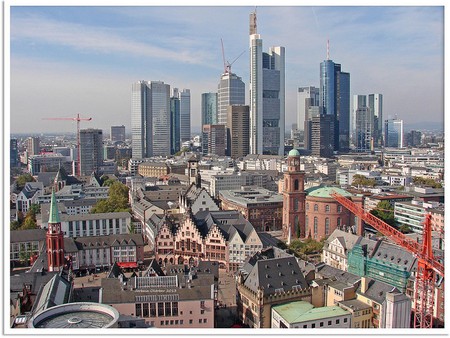 Boasting modernity, steel and concrete skyscrapers, Frankfurt is unlike any other city in Germany. A high-powered business and finance hub, home to the glowing new headquarters of the European Central Bank. However, at its heart, Frankfurt is a vibrant, traditional and charming city, featuring welcoming apple wine taverns, village-like areas, boutiques and street art, large parks and half-timbered buildings huddled between medieval streets.

Church, Cathedral
Facebook
Email
Twitter
Pinterest
Copy link
Share
Map View
Located in the heart of Frankfurt, St. Paul’s Church, locally known as Paulskirche,is a historical church dating back to 1789. It was consecrated as a protestant church and has served its fair share of purposes: as a home to Germany’s first National Assembly, a meeting place for people to see American President John F. Kennedy deliver a speech in 1963, and as a venue for awards ceremonies and other special events. Its historic value and outstanding architecture are undeniable, which will make your visit a history class you really shouldn’t miss.
Open In Google Maps
11 Paulsplatz, Innenstadt I Frankfurt am Main, Hessen, 60311, Germany
+496921234920
Visit Website
Give us feedback

The Römerberg Square is Frankfurt’s busiest and most beautiful market square. For most tourists, this is the first stop on their trail through Frankfurt’s Old Town. Just a few footsteps from St. Paul’s Church, you will get a glimpse of this city’s medieval core. Its history goes back to the 12th century, having served as a trade hub drawing visitors and merchants from countries as far as France and Italy. Some of the fairs held here centuries ago, such as the Frankfurt Book Fair, are still being held today, although they moved a long time ago from the square to more modern facilities. 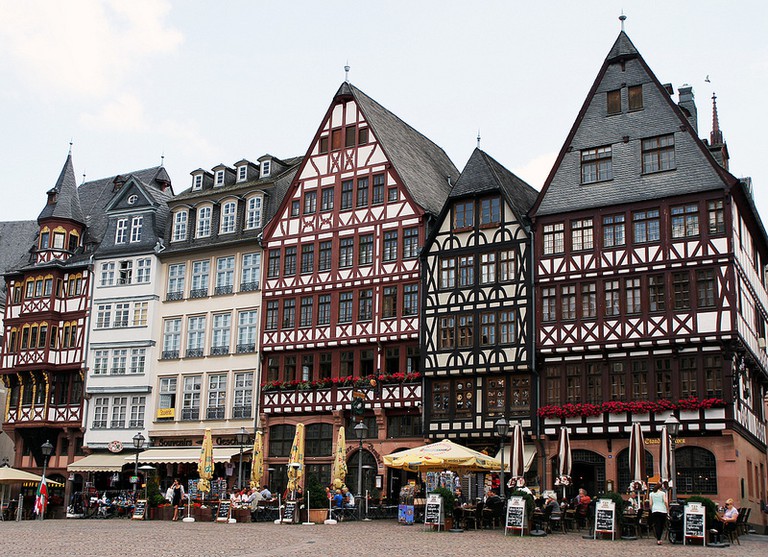 You don’t have to go too far to discover this building complex on the square’s east side, opposite the Römer, popularly known as the Ostzeile. Six picturesque, half-timbered houses are stretched along in a row; reconstructions of their original 15th and 16th-century faces. The 1944 bombardments obliterated the entire Old Town, and with it, the Ostzeile. The area wasn’t rebuilt until 1981, when the houses were reconstructed following the historical building form. From left to right, you will discover all six houses, each bearing an individual name: Kleiner Laubenberg (Little Laubenberg), Großer Laubenberg (Large Laubenberg) , Wilder Mann (Wild Man), Kleiner Dachsberg-Schlüssel (Little Dachsberg), Goldener Greif (Golden Griffin) and Zum Engel (At the Angel).

The Römerberg Square is the gift that just keeps on giving, as here, in the very heart of Frankfurt’s Old Town, you will also discover the Fountain of Justice too. Built in 1543, the statue of goddess Justitia holding the scales of justice without her usual blindfold is facing the square. Legends have been built around the fountain, and the most famous one says that when an emperor was crowned, the people of Frankfurt could enjoy themselves here. The fountain didn’t provide the people of this city just with water, but it also spilled wine, and the people of Frankfurt could smell the aroma of a feast in the workings too!

The Museum of History

Just south from the Römerberg Square, you will find Frankfurt’s Museum of History which traces the history of the city from prehistoric times to the modern era. Housed in a a large complex which was originally built in the the 12th century as a Romanesque palace, the ensemble incorporates five historical constructions as well as a modern concrete structure built between 1969 and 1972. Models of the Römerberg Square can be found at the museum, as well as exhibits recounting the rich story of the city, its destruction following the war, artifacts from the Middle Ages and more modern pieces to boot. 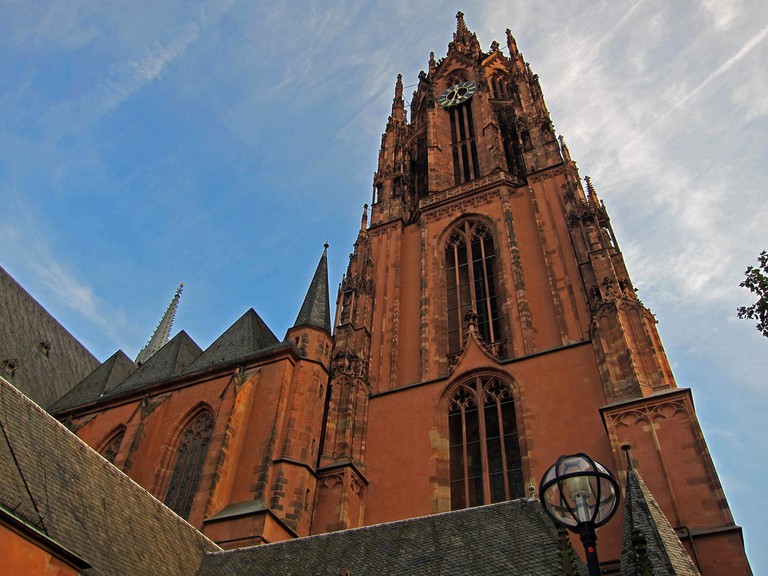 Bearing various names, the Kaiserdom was originally built in the 13th century. From 1356 to 1792, this impressive Gothic-style cathedral served a single purpose: the venue where the Holy Roman Emperors were elected; its chapel known as Wahlkapelle coming into the fore for this purpose. The cathedral was destroyed by a 1867 fire and the bombings of 1944, which left it a burnt-out shell, so it had to be rebuilt. It draws its name, Kaiserdom St Bartholomäus, from its patron, St Bartholomew and frequent religious events a festivals are still on the calendar. 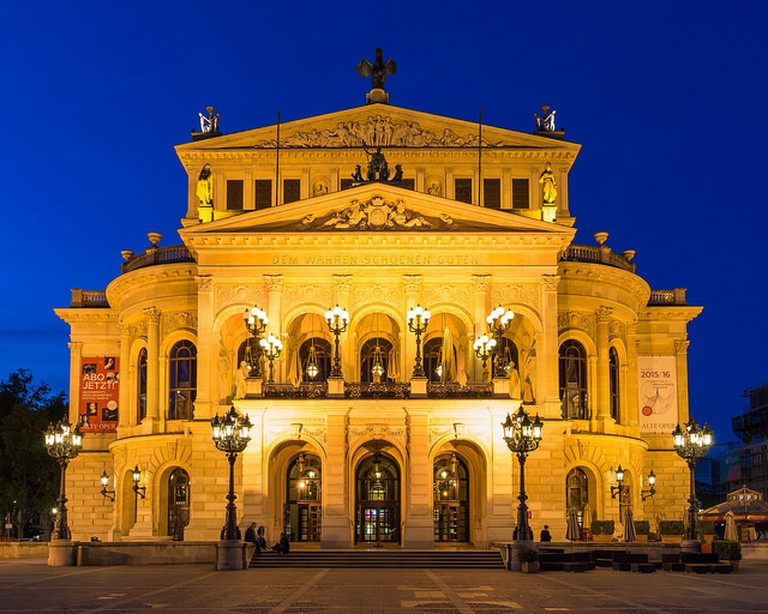 Concert Hall, Opera House
Facebook
Email
Twitter
Pinterest
Copy link
Share
Map View
Inaugurated in the late 18th century, this Italian Renaissance-style Alte Oper, as it is known to locals, attracts visitors from all over the world to its around 300 concerts and events each year. Burnt out in the Second World War, it just avoided being razed but was finally reconstructed between 1976 and 1981 to its original state, featuring the statues of Mozart and Goethe. The Great Hall, famed for its excellent acoustics and swathed in mahogany, welcomes the performances of national, as well as international ensembles and soloists,
Open In Google Maps
Innenstadt I Frankfurt am Main, Hessen, 60313, Germany
+496913400
Visit Website
Give us feedback

Located in the heart of the Römerberg area, this beautiful little church built in the 15th century resembles more of a fairytale castle than a church. Strategically positioned right in front of the Museum of History, Old Nicholas Church is a small, early-Gothic-style church. Early in 1290, the small church became a court chapel meant to serve the emperors of the time. In the 15th century, the church became the official chapel of the city council. An ensemble of 35 bells chimes daily at 9.05am, 12.05pm and 5.05pm.

Dubbed one the most important exhibition venues in Europe, the Schirn Art Gallery opened its doors to the public in 1986. Constantly changing its shows of contemporary art, you will find this venue next to the Römerberg Square and the Frankfurt Cathedral. Since its opening, it has presented more than 200 exhibitions and can boast a total of more than eight million visitors. Its main focus lies on historical art and historico-cultural discourse themes set in a contemporary context. It has been a pillar in Frankfurt’s cultural life, having contributed significantly to the development of fascinating exhibitions from all over the world.

Being a tourist in Frankfurt is no easy task (there’s just so much to see!), so at the end of the day you will want to experience the German kitchen to refuel and unwind. Look no further than The Storch, one of the oldest restaurants in the city, conveniently located in the heart of the Old Town. With a genuine rustic interior, distinguished service and a friendly atmosphere, this place below the Dom will cook up smorgasbord of German treats, offering everything from original Frankfurt cuisine to regional specialities. The famous poet Goethe was a regular of this joint too!