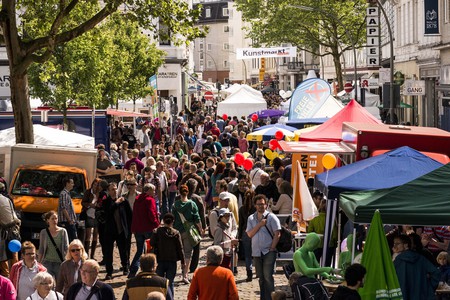 There’s not much that the people of Hamburg enjoy more than a good Straßenfest. From the first rays of spring sunshine until the autumn downpour, streets and squares all over the city host street festivals large and small. There’s plenty of food and drink, live music, flea markets, not to mention plenty of Hamburg spirit. Don’t miss out!

Market
Facebook
Email
Twitter
Pinterest
Copy link
Share
Map View
The street festival season is kicked off by the Osterstraßenfest that takes place at the end of April. For over 30 years the Osterstraße shopping district invites Hamburgers to a fun weekend of street food, live music on several stages, fun rides and carousels, market stands selling crafts and jewelry as well as a beloved flea market. A special neighborhood atmosphere is provided by the local associations – sports clubs, social facilities, fire brigades and more – who inform about their work and invite to take part in fun and games.
Open In Google Maps
Hamburg, Germany
Give us feedback

Every year at the beginning of May Hamburg celebrates the biggest harbor festival in the world. The festival is opened and closed by a spectacular parade of over 300 ships of all sizes and ages. From the HafenCity to the Fish Auction Hall, the six kilometer (3.7 mile) long “Hafenmeile” offers the festival’s million visitors everything from culinary specialties (and beer aplenty) to stands selling arts and crafts, live music concerts, and dragon boat races. Ships from all over the world welcome visitors on board, tugboats perform ballet, and fireworks light the night skies.

Market
Facebook
Email
Twitter
Pinterest
Copy link
Share
Map View
At the end of May the Stadtfest St. Georg invites Hamburgers to a street festival around the Lange Reihe. True to the liberal spirit of the St. Georg district, the festival celebrates national, ethnic, religious and sexual diversity. Highlights include countless street food stands, a flea market, a family area with entertainment for kids, and stands presenting the neighborhood’s clubs and associations. The biggest crowds flock to the festival’s two live music venues – the “culture stage” and the “newcomer stage.”
Open In Google Maps
Hamburg, Germany
Give us feedback

Market
Facebook
Email
Twitter
Pinterest
Copy link
Share
Map View
The beginning of the summer is celebrated at the Eppendorfer Landstraßenfest at the heart of the Eppendorf district. It’s one of the most popular street festivals in the city and attracts Hamburgers from all walks of life. While kids bungee jump, shoot at targets and ride carousels, their parents browse the flea market and art and design market stands, while others enjoy live music acts and culinary treats. A legendary attraction is the waiter race for staff from the district’s cafés and restaurants.
Open In Google Maps
Eppendorfer Landstraße, Hamburg-Nord Hamburg, Hamburg, Germany
Give us feedback

The three day long 48h Wilhelmsburg festival that takes place on the Elbe island of Wilhelmsburg is all about music. The island itself becomes a stage and music is played everywhere, from concert venues to museums, from churches to art ateliers, from squares to street corners. The local and international musicians represent numerous cultures as well as professional levels, covering a wide range of musical styles: folk, indie, jazz, soul, rock, reggae, avant garde, classical, world music, and more. 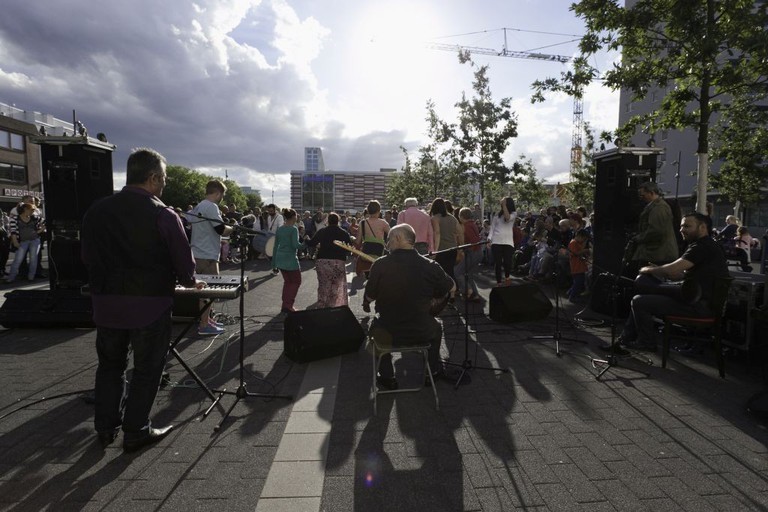 The street festival of the Sternschanze district – the Schanzenfest – doesn’t have a set time of the year and its date is rarely announced in advance. Just like the district it represents, the Schanzenfest is lefty and alternative, taking a stand against capitalism and commercialization. During the daylight hours the district invites for a lively day of eating and drinking, flea market shopping and enjoying street art and alternative music performances. But be advised against staying after nightfall as the traditional close of the festival sees clashes between police and radical left groups.

In the middle of the summer the multicultural Altona district hosts Altonale, Hamburg’s largest street festival. Its diverse program of movie, theater, art, literature, music and dance events lasts for over two weeks and culminates with a weekend of markets and music. Visitors browse unique items at the flea market, admire paintings at the art market, find a special treat at the medieval market, and enjoy the festive atmosphere created by the bustling crowds and live music on every corner.

The Altonale is introduced by the STAMP Festival of international street arts. Under the tagline “the street arts melting pot,” every year STAMP showcases over 1,000 street artists from more than 10 countries. The streets of Altona become a stage to a vibrant mix of urban artists, performance dancers, jugglers, parade troupes, street theaters, and other artists. The festival’s highlights are the opening night parade with amazing fire shows and the colorful STAMP parade that closes the festival weekend.

Every August the Uhlenhorst and Winterhude districts celebrate Dat Uhlenfest. A newcomer to Hamburg’s street festival scene, the Uhlenfest has quickly gained popularity and for a good reason: it has everything that a good street festival needs. The area of Hofweg and Papenhuder Straße becomes an entertainment mile with a gourmet market, a design market and the obligatory flea market. Live music stages showcase musicians and street artists, and a children’s stage entertains the young festival guests.

The end of the summer is celebrated by the four day long Alstervergnügen festival that takes place around the Lake Alster. The locals and city guests are welcomed to sample food and beverages from the countless stalls and enjoy live performances and diverse attractions. Over 500 local and international artists and performers entertain on the festival’s four stages, and the culmination of each day is a magnificent firework show over the lake. 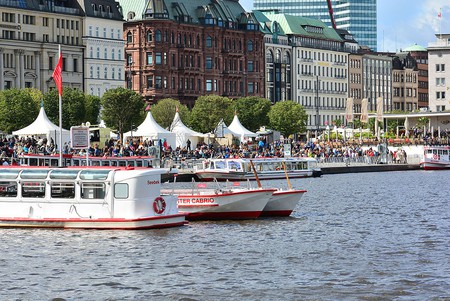