The Top 10 Paintings In The Neue Pinakothek 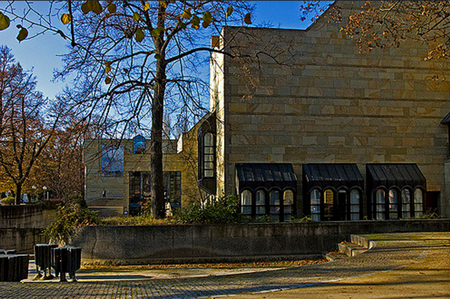 As a passionate art collector, King Ludwig I of Bavaria commissioned the building of the Neue Pinakothek in 1858. He wanted to create a home for all his contemporary pieces and the museum became the first to display ‘modern’ art worldwide. Unfortunately, an Anglo-American attack in World War II demolished the original building. After an architect competition won by Alexander von Branca a new building was rebuilt almost 100 years later. Today, the museum holds pieces from the late 18th century up all the way up to the early 20th century. The museum has a vast amount of German Romantics paintings as this was the King’s favourite style. Other pieces range from British Realism to French Impressionism and German Art Nouveau.

Thomas Gainsborough (1727-1788) was the painter behind this elegant and realistic portrait of Mrs Thomas Hibbert. Her delicate, white silk dress is really the highlight of this painting as it can be seen shimmering in the light. Mrs Hibbert’s pale, white skin depicts the make-up worn by women at the time. Back in the day, the paler your skin was the wealthier you appeared to be. Gainsborough was known for his portraits and landscapes. His competitor at the time was Sir Joshua Reynolds who had a similar style of painting. 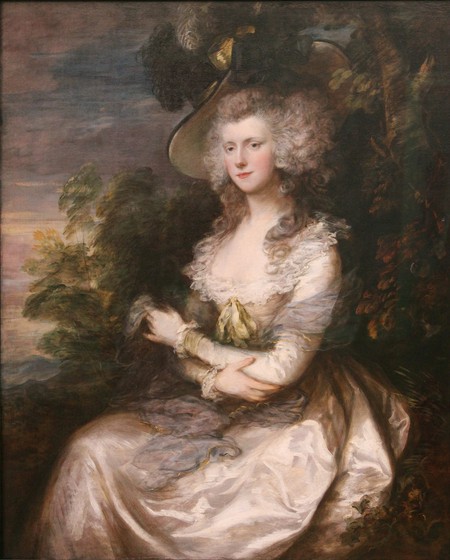 The Two Sons of the 1st Earl of Talbot, Thomas Lawrence

Sir Thomas Lawrence (1769-1830) captures the two sons of the Earl of Talbot in this painting. The red hair of one of the sons and the other’s red jacket resemble the red leaves on the trees. One of them is pointing to the deer on the left side of the image. Lawrence is said to be the most famous and successful British painter of his time. He was greatly influenced by Gainsborough and Reynolds.

Highlight: The accent of red 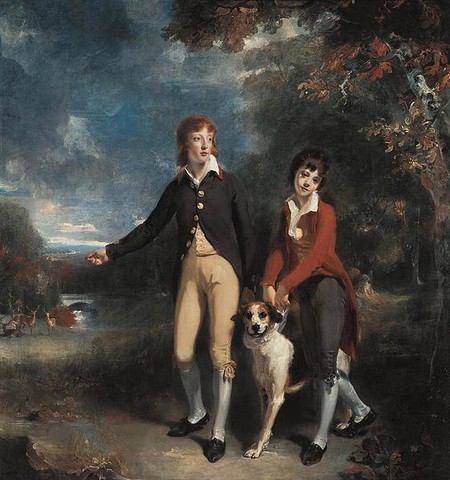 Francisco José de Goya y Lucientes (1746-1828) is renowned for his ‘psychological’ portraits. It is said that he was able to paint the souls of his subjects. This painting is no exception. Through the heavily dark background the face of the army doctor becomes the point of focus. Why does he have this odd posture? Why the blank stare? Goya’s talent really made his subjects come alive.

Highlight: The note that the army doctor is holding 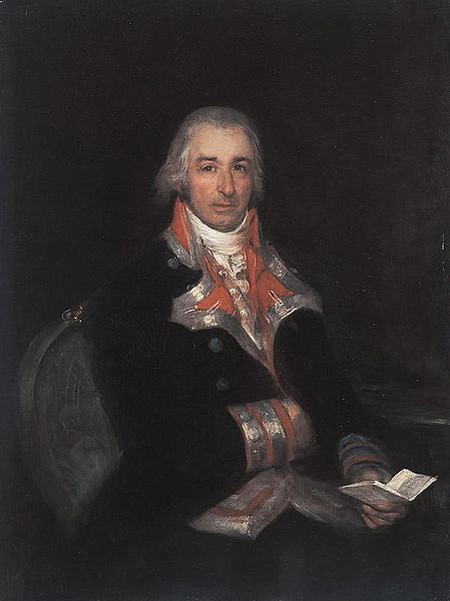 The inspiration for Friedrich Overbeck’s (1789-1869) image came from Pforr’s painting called Shulamit and Maria. Pforr was a close friend, who was also part of the Nazarenes movement that was made up of German Romantic painters. This image, unlike the previous version, shows both women interacting and on the same canvas. The women represent Italy (on the left) and Germany (on the right). The left side displays a Roman monastery, whilst the other side depicts a German Gothic church and town.

Highlight: Small cities in the background 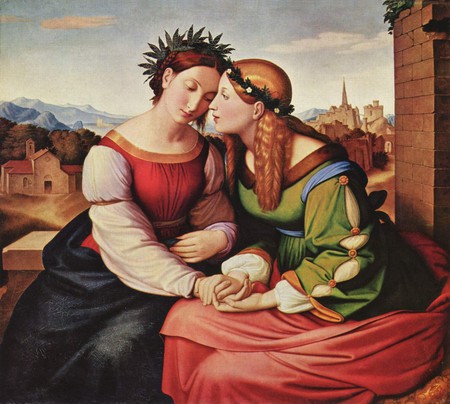 Overbeck's Italia and Germania via Wikimedia

Édouard Manet (1832-1883) painted this portrait of his illegitimate son. The painting captures a moment in time: a luncheon. Even the smoke coming out of the man’s mouth is shown in the air. Manet is known for his detailed elements which are seen on the table. Look at the pealed lemons, the big oysters and the balancing knife. Like this painting, Manet started with a realistic style; he later became an Impressionist and one of the vital figures in the Impressionist movement.

Highlight: All elements on the table 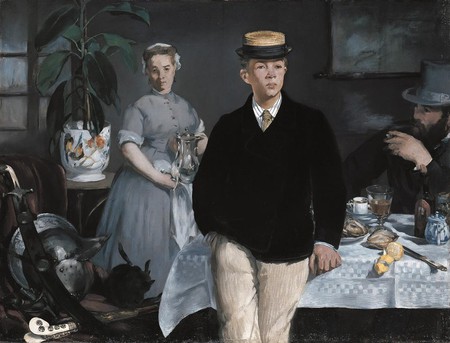 As a close friend of Manet, Edgar Degas (1834-1917) was also part of the French Impressionist movement. The style of painting is in the abrupt brushstrokes that make up the background of the painting. The artist always captures scenes in motion. This can be seen in the blurred line that shows the woman’s motion of ironing. An interesting fact is that this painting was never finished by Degas.

Highlight: Hand in motion on the ironing board 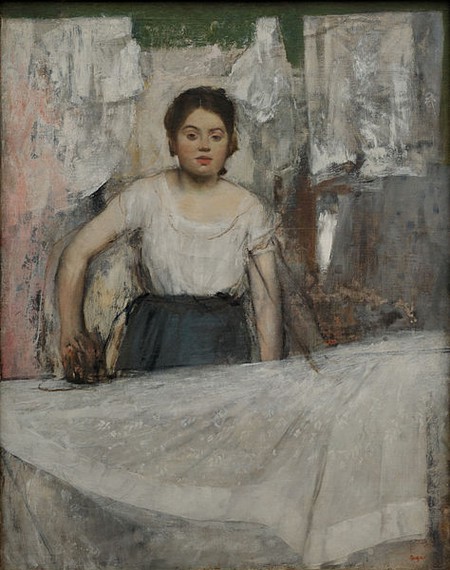 Vincent van Gogh (1853-1890) is mostly associated with his sunflowers. The Dutch Impressionist painter has made dozens of sunflower paintings that were meant to decorate his entire house in Arles. This painting uses blues and yellows to capture the strong colors of the flower. His paintings were said to capture universal emotions of joy and sorrow. With the bright yellows and blooming flowers, this image definitely shows joy.

Highlight: The individual strokes of the flowers 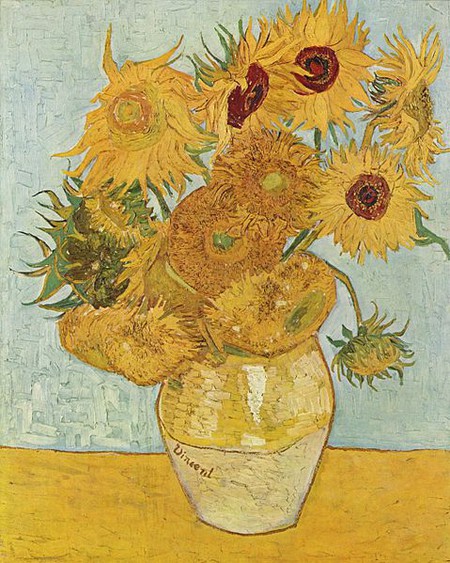 Gustav Klimt (1862-1918) is known for his vertical paintings of women. Even though the paintings are long the subjects in them are not parallel to the painting and have a certain twist to them. The woman’s dress makes up the majority of this painting and shows its delicate, lacy material. Margaret almost appears two-dimensional, just like all the colourful squares around her in the painting. Klimt was a neo-Impressionist and is one of the last canvases hanging in the museum as he painted in the turn of the century.

Whilst Van Gogh is known for his sunflowers, Claude Monet (1840-1926) is famous for his water lilies. The French Impressionist produced endless amounts of water lilies, each similar in style and colours. All of these paintings were meant to be a large scale assemble, instead each of them has landed in a different museum across the world. This painting like the others includes green, blue and pink elements and captures the simplicity of the flowers.

Highlight: The pink lilies and one white one 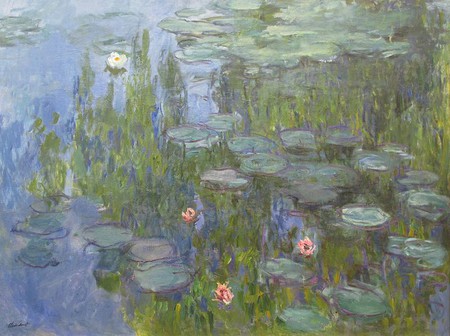