10 Paintings In The Alte Pinakothek You Need To Know

Built in 1836, Munich’s Alte Pinakothek is one of the oldest art galleries in the world. At the time of its creation, King Ludwig I of Bavaria wanted to create the largest museum in the world with a castle-like exterior. The museum is known for its renowned collection of Old Masters’ paintings. It also includes paintings from the 14th to 18th century and painters from Spain, Germany, The Netherlands, and many more. Here are our favorite 10 paintings you can find on the walls of the Alte Pinakothek.

Leonardo da Vinci (1452-1519) is arguably one of the most talented engineers, painters, architects, etc. to ever exist. This painting is also known as Madonna with Vase or Madonna with Child. Either way it is clear that the center motif of this painting is the Virgin Mary. The light focuses on Mary, Baby Jesus and the carnation she is holding. The two windows in the background resemble a tranquil, nature landscape that is split evenly with Mary in the middle.

Highlight: The details of the fingers is one of da Vinci’s best features
Year: ca. 1478/80 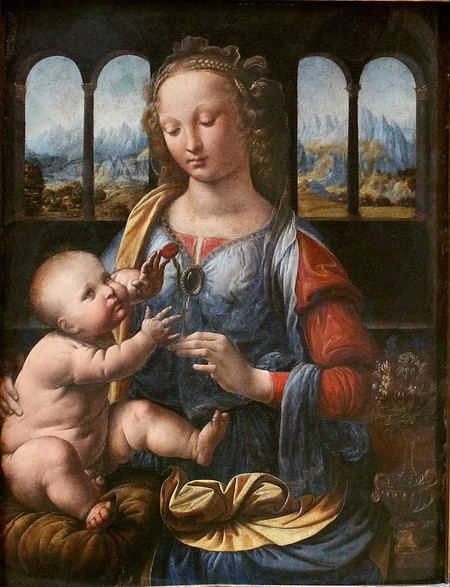 Raphael’s (1483-1520) style resembles da Vinci and Michelangelo. This piece however includes some elements that differentiates Raphael from the others, by adding a northern landscape and shimmering colors. The pyramid consolation is also customary for da Vinci, yet through the glances and body language Raphael is able to create a sense of calm. With the tranquil landscape, lustrous colors and calm figures, Raphael depicts complete serenity.

Highlight: The glances between all figures
Year: ca. 1505/6 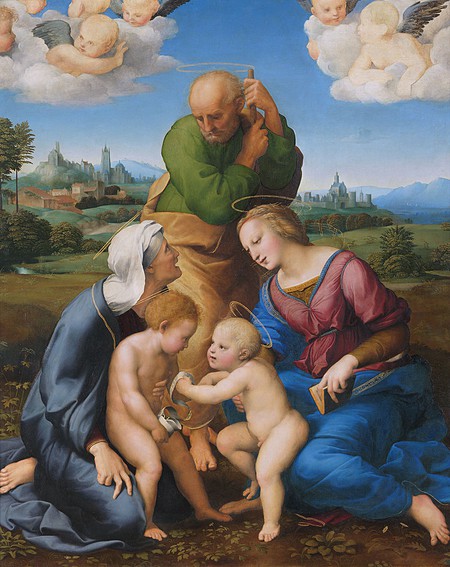 Back in the day selfies were not made with a click of a button but required a long process of looking oneself in the mirror and painting what you saw. Albrecht Dürer (1471-1528) has created one of the unusual self-portraits in art history.

His bold gaze and placement in the painting give him a Christ-like appearance. With the plain background Dürer gives no indication of time and place. And, since no hashtags were in place, the painter used the inscriptions to give more details. 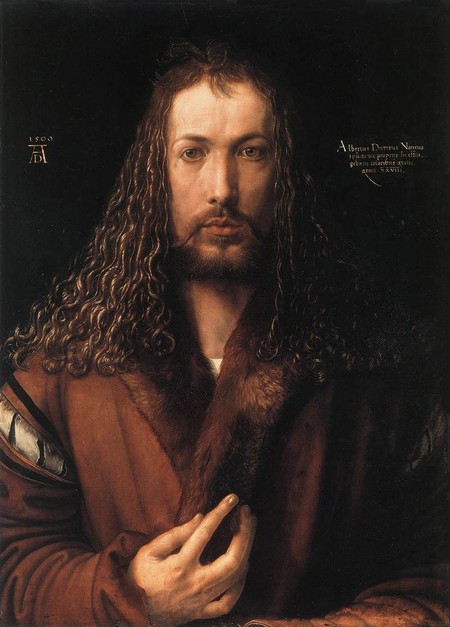 The Battle of Alexander at Issus, Albrecht Altdorfer

Albrecht Altdorfer (1482-1538) depicts the battle between Alexander the Great against the Persian King Darius III. This painting was made for the Duke of Bavaria who feared an invasion of the Turks into Europe. He had this piece made as a reminder of the power and influence Alexander had in taking over parts of the Persian territory.

By including the sun and the moon Altdorfer demonstrates how this will be a long and hard battle. Additionally, with the vast landscape and the thousands of soldiers, he shows just how grand this battle is and how many territories will be included in the fight.

Highlight: The staggering detail of each soldier
Year: 1529 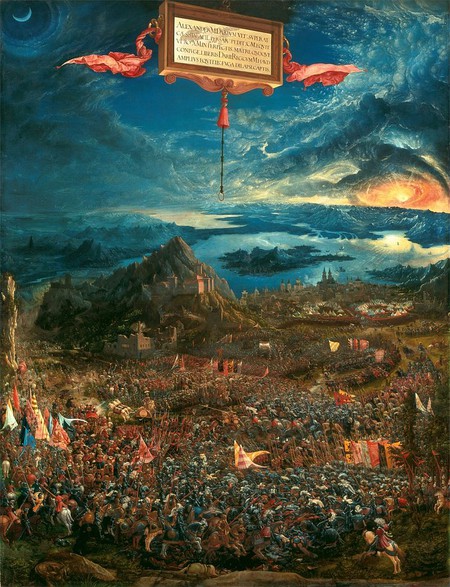 The Land of Cockaigne, Pieter Bruegel

In this painting Pieter Bruegel (1525-1569) depicts two of the seven deadly sins: gluttony and sloth. It is arguably a critique of the First Revolt in Belgium. It almost appears to be Never-Never Land or “Luilekkerland” as it is referred to in Dutch literature. It where all anyone does is sleep, and for that reason art historians have called this piece a political satire.

Highlight: Legs and the knife in the pig
Year: 1566 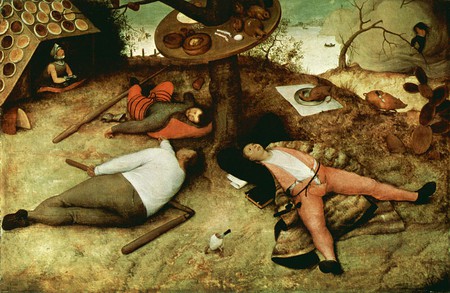 The Rape of Daughter of Leucippus, Peter Paul Rubens

Additionally, all figures including the two men, women and horses are looking in different direction and create a jumble of bodies in the painting. These were all characteristics of Baroque art, which this painting embodies perfectly. 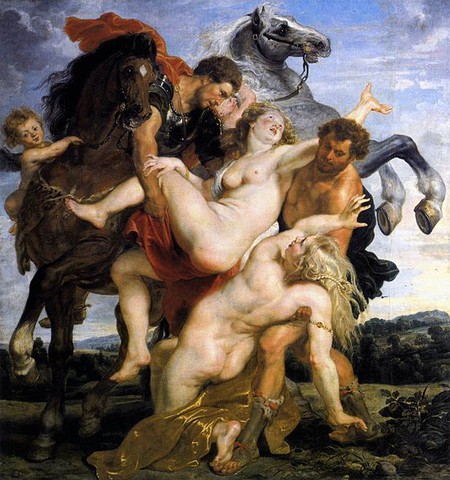 Rape of the Daughters of Leucippus | © Web Gallery of Art / WikiCommons

Another art history ‘selfie’, this time made by Rembrandt (1606-1669). This painting is one of the first of dozens of self-portraits that the painter created. The 1629 version seems to have a ghost-like appearance. He used a very minimal range of colors in his clothing, hair and face, and also in the background. Today, this ‘selfie’ would go down as a “woke up like this” moment. 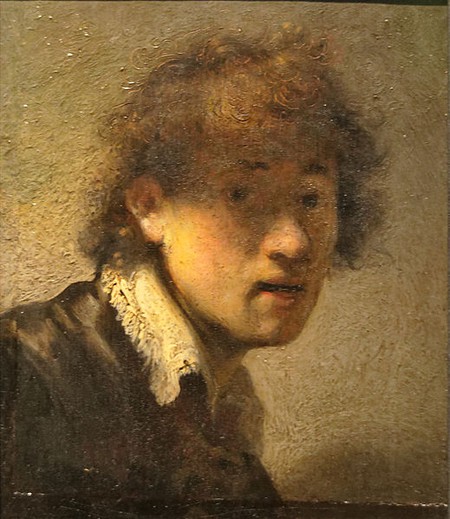 Bartolomé Esteban Murillo (1618-1682) used very dark colors to portray these two beggar boys. The somber background symbolizes the high amount of poverty in Seville at the time. Yet, this painting combines the misery of the homeless boys with the moment of joy of eating, perhaps stolen food. The grapes and melon are illustrated with such precision that is resembles the style of still life painting. 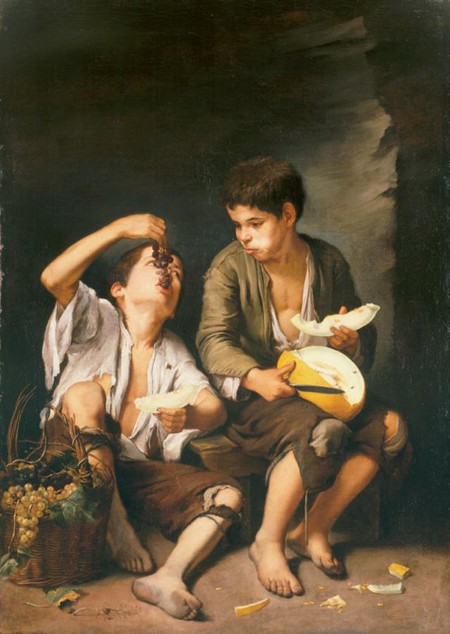 Gerard Ter Borch (1617-1681) was particularly known for depicting Dutch middle-class society. He often used very subtle colors, which is also the case in this painting. The color of the wall blends in with the floor, his coat and all the other objects in the room. The painting is made in a realistic style making the items appear to be at arm’s reach from the viewer. 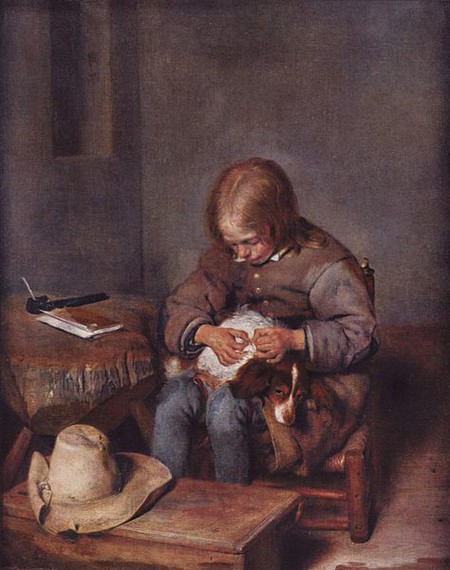 The Flea-Catcher | © The Yorck Project / WikiCommons

Francois Boucher (1703-1770) painted numerous pieces of Marquise de Pompadour, the mistress of King Louis XV. In this portrait she is represented with many books and a writing table next to her, showing off her intelligence. The highlight of this piece is her dress and the careful detail of the individual flowers. 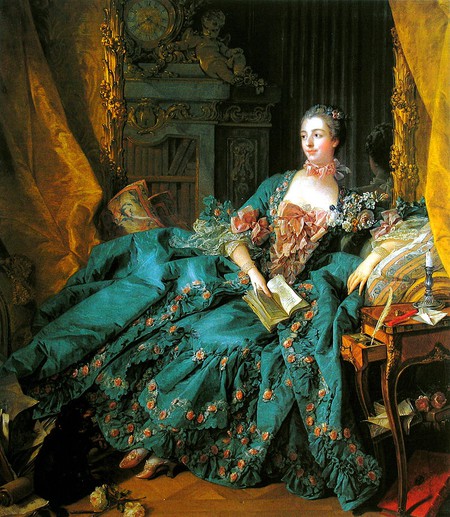