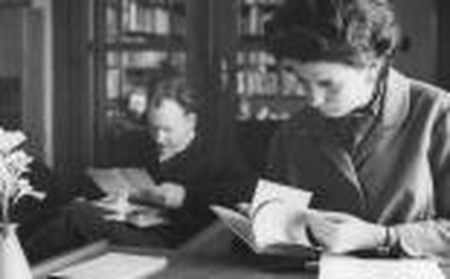 When Christa Wolf passed away in 2011, she left behind more than an acclaimed body of work. Her death prompted critics and fans alike to reexamine her troubled relationship with socialism, democracy, and political history. 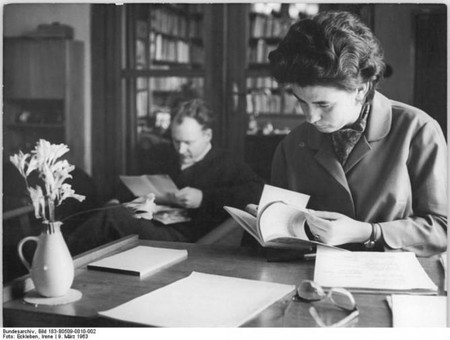 Born in 1929 in Landsberg an der Warthe in today’s Poland, Christa Wolf eventually moved to Germany and lived through some of the country’s most momentous transitions in the 20th century. At the end of the Second World War, Wolf found herself in Mecklenburg, and ended up in the socialist GDR when Germany was split into two separate countries. Once she became a citizen of the East, the East became a central presence in her life: she joined the GDR’s Socialist Party in 1949, at the age of twenty, and remained a member until the fall of the regime in 1989. 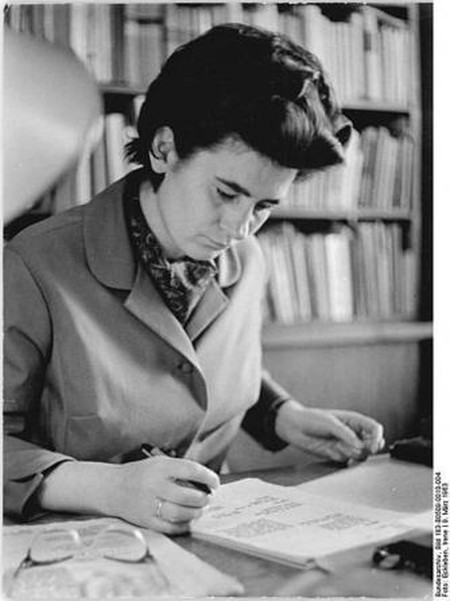 After, having studied German literature in Jena, shestarted her career at the Deutscher Schriftstellerverband, an East German writers’ association, and edited texts for various publishing houses. At the time, culture played a vital role in the people’s ‘social education,’ as the government described it. Social realism was hailed as the state favorite, and compliant writers could count on publication, handsome salaries and state appreciation.

Wolf’s first novel, Divided Heaven (Der geteilte Himmel), became an instant sensation when it was published in 1963. The novel tells the story of a young East German couple, Rita and Manfred. Once they move in together, one fundamental difference emerges: Rita is committed to The Party’s ideals, while Manfred feels oppressed by the GDR’s political realities. Eventually, he defects to the West and stays there. After an initial visit to see him, Rita returns to the GDR with no intention of leaving again. In the last lines, Manfred states that, ‘At least they can’t divide the sky.’ Rita famously replies, ‘The heavens are what split first.’ Essentially a political allegory, the novel had all the ingredients to make Christa Wolf the GDR’s literary prodigy – including its symbolic ending: socialism’s victory over other systems. 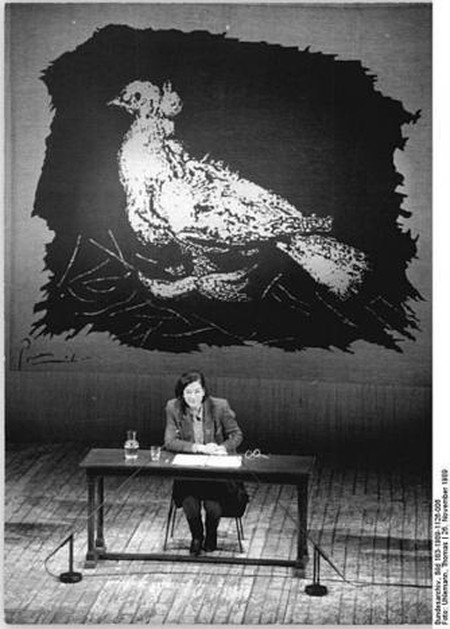 But Wolf’s claim to fame began to show cracks five years later with the publication of her second novel, The Quest for Christa T. (Nachdenken über Christa T, 1968). Throughout the text, the issue of how the self fits in with the socialist ideal of the collective is brought up. In her novel, Wolf oscillates between the individual self and the larger group, alluding to the potential flaw of this relationship: Christa T., the enigmatic eponymous character, is neither part of the group nor a complete individual, as she eludes social conformity. A unique narrative style referred to as ‘subjective authenticity’ undermines the existence of ‘fact’ and relies on supposition – a risqué move in a political system that strove to know everything about everyone. Not entirely in line with the socialist credo, the book heralded Wolf’s disillusionment with the state and her fall from the status of state favorite. The book garnered praise in the West, but it was banned in the East.

‘I can only write about things that disturb me,’ Wolf said in a 1976 interview with Hans Kaufmann. Her work around that time focused primarily on the subjects of power, inclusion/exclusion, and the role of women. The semi-autobiographical Patterns of Childhood (Kinderheitsmuster, 1976), approaches difficult subjects such as selective memory, subjectivity and, above all, the concept of Vergangenheitsbewältigung – here, specifically, coming to terms with Germany’s Nazi past. Cassandra (Kassandra, 1983), a rewriting of the ancient Greek myth, deals with the symbolic representations of contemporary problems: the tense relationship between a patriarchal society and its female citizens, marginalization, and the ‘self’ vs. the ‘us’. In the Kaufmann interview, Wolf further explained that novels – her novels – take root in, ‘an experience, which needs to be assimilated: experience of ‘life,’ by which I mean experience of the tangible reality of a particular time in a particular society.’ And indeed, throughout her oeuvre, individual fates clash with external realities – just as she did.

In 1989, Wolf left the Socialist Party with several fellow artists. Despite her disillusionment with the GDR, her profound belief in an East Germany never faltered. On the 4th of November 1989, together with the likes of Stefan Heym or Heiner Müller, she held a speech during a demonstration at Berlin’s Alexanderplatz. Although the GDR’s collapse was unavoidable at that point, she still called out for the people to unite in overcoming this political crisis and creating a new nation. In the face of harsh criticism, she remained firm in her belief that it was change, and not the disbanding of a nation, that was necessary: the country should have been reborn on the pillars of socialism. 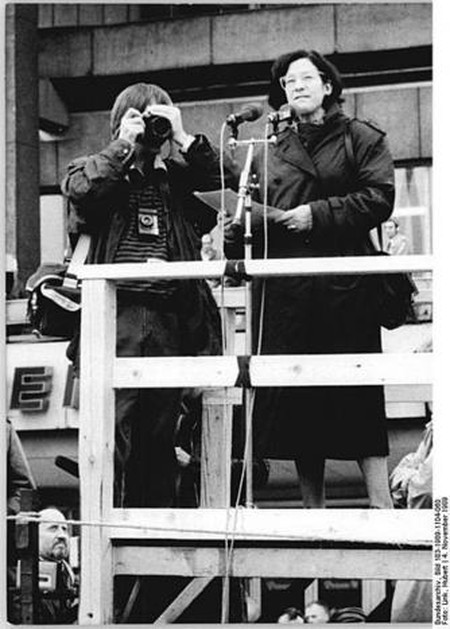 But the two Germanys were reunited. A couple of years later, in 1993, Wolf faced another crisis. She became the subject of heated public debate when the extent of her collaboration with the GDR’s secret police was revealed. Files proved that she worked as an informant for the Stasi between 1959 and 1961 – but also showed that she was closely watched by the Stasi for thirty years.

Waves of criticism coming from the media accused her of opportunism, cowardice, and a lack of artistic integrity. The controversy died down eventually, but the perception of Wolf as a writer had changed forever. In an interview with the German Spiegel in 2010, Wolf still expressed a marked resentment at being treated like a political dilemma, rather than writer, ‘what bothered me, and actually made me angry, was that people focused on this single point, and that they didn’t see my development, and that they didn’t even think it necessary to find out what other files there were.’

Wolf died in 2011 at the age of 82. At a gathering to commemorate her work, friend and fellow author Günter Grass defended her writing and actions, insisting that ‘at a time when East and West, bristling with weapons, faced off in rigid ideological confrontation, she wrote books that crossed and overcame this divide.’

By fate or coincidence, Wolf was buried in the Dorotheenstadt Cemetery in central Berlin, practically on top of the former East-West divide.