The Most Scenic Train Journeys in Germany 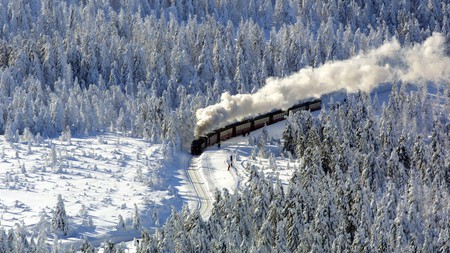 On your next trip to Germany, why not ditch the car and treat yourself to a mind-blowing scenic train ride instead? A slow, leisurely journey through dense forests, snow-blanketed mountain roads or alongside sparkling lakes is guaranteed to be the highlight of your German holiday. Here’s a list of train routes in Germany that promise incredible scenery. Of course, you can choose to take each listed ride the other way round.

The Höllentalbahn translates to Hell Valley Railway, but in reality, it’s a heavenly journey to take when you are in the Black Forest. This route connects Freiburg im Breisgau with Donaueschingen via the dramatic Dreisam river valley and takes around 90 minutes. It’s among the steepest rail lines in the country, rising from 278m (912ft) to 885m (2,904ft) in altitude during its course. The most exciting part of this excursion is crossing the Ravenna Gorge on the 40m- (131ft-) high Ravenna Bridge.

If you’re in no hurry to head back, book a room at the Flair Hotel Grüner Baum on the outskirts of town. With a range of room sizes and an on-site restaurant, it’s just a short walk from the source of the Danube. 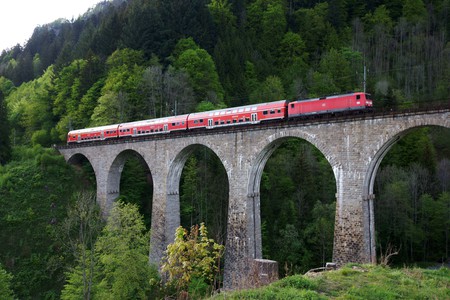 For sweeping views of the Rhine Valley, book a seat on this route. The 139km (86mi) journey takes an average of one hour and 40 minutes. If you wish to make a stop in the pretty town of Koblenz on the way, that is an option as well. From your train window, enjoy views of the Rhine flanked by cliffs and with ships bobbing in the horizon. The route is punctuated with picture-postcard towns and hills crowned by ancient castles, making it one of the most romantic train rides in the country. When travelling from Cologne to Mainz, grab a seat on the left side of the train for the best views (and on the right side if you are travelling from Mainz to Cologne).

Mainz is the wine capital of Germany and a vibrant university city, so it’s worth sticking around to explore. Peek inside the city’s beautiful churches, wander around the medieval old town and put your feet up at the centrally located me and all hotel Mainz for a night or two. 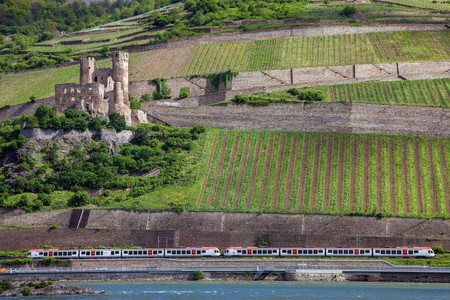 See beautiful castles, such as the Ehrenfels Castle, on a train ride through the Rhine Valley | © Helmut Corneli / Alamy Stock Photo

Take a memorable train ride from the picturesque Konstanz by Lake Constance to the land of Hansel and Gretel, the Black Forest. This route covers 129km (80mi) in three hours and 55 minutes on average (with stops). Soon after leaving Konstanz, you’ll see mesmerising scenes of pine forests, which will gradually give way to vistas of the impenetrably dense Black Forest, lush meadows and quaint hamlets. The train meanders over the Hornberg Viaduct and the beautiful town of Triberg on its course.

In Offenburg, stay overnight at the Mercure Hotel Offenburg am Messeplatz. It’s not far from the train station, and there’s an indoor pool you can take a dip in before breakfast in the morning. 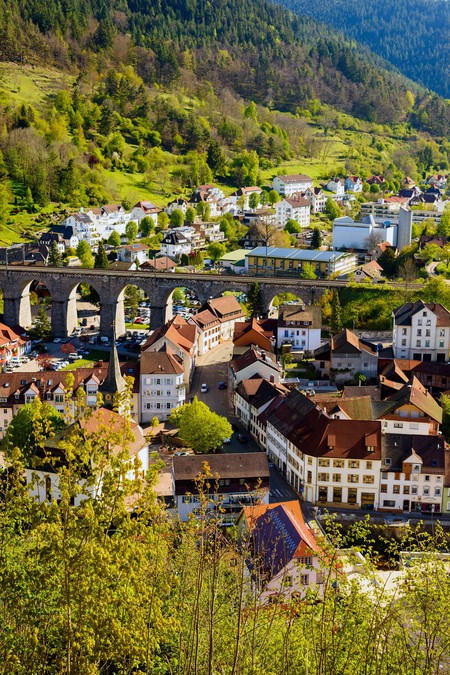 Neuschwanstein Castle, the most spectacular castle in the world, is reachable via a 91km (57mi) scenic train ride from Munich. Journeying across the Bavarian countryside from Munich to Füssen is equivalent to travelling through a picture postcard. Expect to see endless lush meadows, rolling hills and tiny villages. No matter how well prepared you are, you won’t be able to stop your heart from skipping a beat when you see Neuschwanstein Castle set against the majestic Bavarian Alps for the first time. To catch a perfect view of the castle from the train, remember to sit on the left side.

Though you can’t actually stay in the Neuschwanstein Castle itself, you can book a room at Villa Ludwig Suite Hotel just down the hill to make sure the fairytale citadel is the first thing you see when you draw the curtains in the morning. 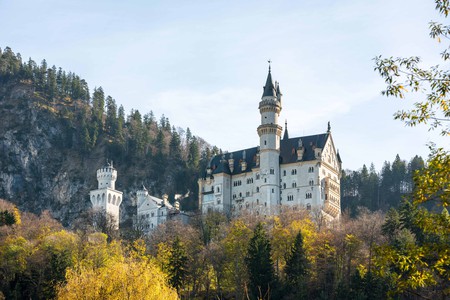 Taking about one hour and 51 minutes, this 81km (50mi) train ride to one of the most beautiful alpine towns, Mittenwald, is a brilliant day-trip idea from Munich. En route, enjoy quintessential Bavarian countryside panoramas of the snow-capped mountains, cute little villages and green fields. In the cold months, this region transforms into a snowy winter wonderland.

For a place to stay, we recommend a guest room at Post Hotel Mittenwald. Here, you’ll be close to the centre of town and have an indoor pool and Bavarian-style spa to keep you occupied when you’re not out exploring. 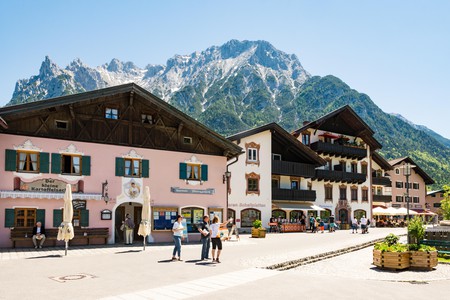 This train journey is reason enough to travel to the Harz Mountains. The historic steam Brocken Railway starts at Drei Annen Hohne station and meanders through Harz National Park to reach Brocken, the highest peak (1,141m/3,744ft) in the Harz mountain range. The journey covers only 19km (12mi) but offers views of mountains and valleys that you will never forget. 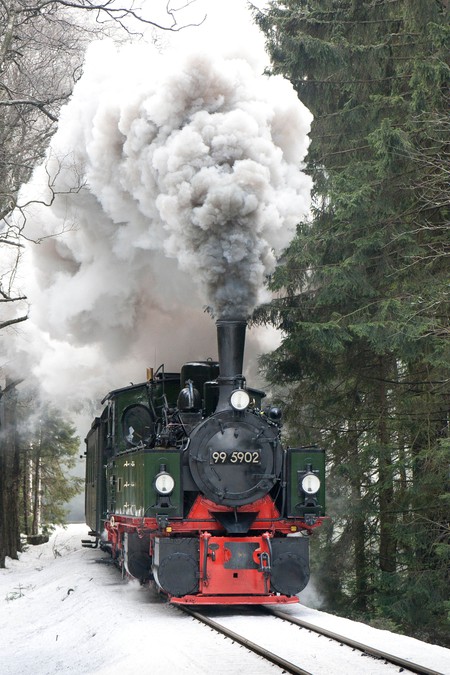 When you take the Höllentalbahn (Hell Valley Railway), you can either go all the way from Freiburg to Donaueschingen or diverge southwards on the Dreiseebahn (Three Lakes Railway) from the Titisee station. The train is so named because it crosses three famous Black Forest lakes during its course – the Titisee, Windgfällweiher and Schluchsee – terminating at the Seebrugg station. Soon after leaving Titisee, you’ll be rewarded with uninterrupted, beautiful views of Bärental (Bear Valley). The Feldberg-Bärental station at 967m (3,173ft) above sea level is the most elevated point of the course. The journey covers a distance of 19km (12mi) in about an hour.

Trains leave Freiburg every hour, so it’s easy to get tickets at the station without booking. However, if you do want to make time to explore the city and its enchanting old town, arrive a day early for a stay at the Alex – a chic boutique hotel that’s just five minutes from the main train station on foot. 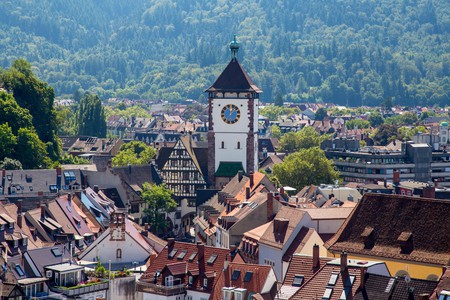 The Bavarian Zugspitze Railway is one of four rack railways still operating in the country. It runs from Garmisch (705m/2,313ft) to just below the top of Germany’s highest mountain, Zugspitze, making it the highest railway route (2,650m/8,694ft) in the country and the biggest ascent in Europe. At the station, you need to switch to a cable car to go up to the summit. The entire journey takes around 75 minutes and is as scintillating as the destination itself. 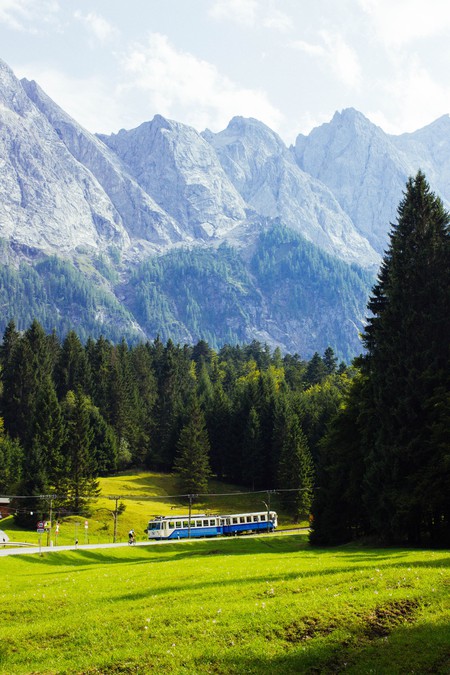 The Saxon Steam Railway Route stretches about 100km (62mi), consisting mostly of old narrow-gauge railway lines that preserve Saxony’s heritage and culture. This nostalgic journey reveals splendid surprises and a treasure trove of natural beauty, castles and cultural icons during its course. The train meanders through Saxony, including the Elbe region, the Eastern Ore Mountains, Saxon Switzerland National Park, Upper Lusatia, Lower Silesia and the Vogtland. The culturally rich city of Dresden, the Moritzburg Castle, Leipzig, the wine town of Radebeul, the Ore Mountains and Lößnitzgrund Valley are the most popular stops on this route.

If you’re planning a stopover in Dresden, check out our pick of the best hotels in town for a place to stay. 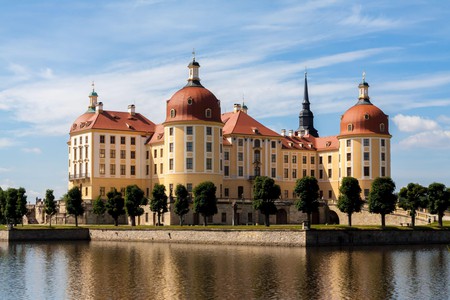 The Fichtelberg Railway is a nostalgic steam locomotive that goes from Cranzahl to the popular ski resort and Germany’s highest town, Oberwiesenthal. This scenic 17km (11mi) train ride lasts about an hour and brims with views that are sure to exceed your imagination. On the way, you’ll come across many photo opportunities – Sehmatal Valley, trains passing each other at the quaint Neudorf, Hammerunterwiesenthal, Pöhlbach Valley, five bridges and a viaduct. During Christmas, you can feast your eyes on towns bathed in lights and a blanket of snow in the Ore Mountains.

Soak up the scenery of Oberwiesenthal and spend the night to catch both the sunset and sunrise if you’re an early riser. Alpina Lodge Hotel Oberwiesenthal offers a range of rooms and a spa for even more soaking. 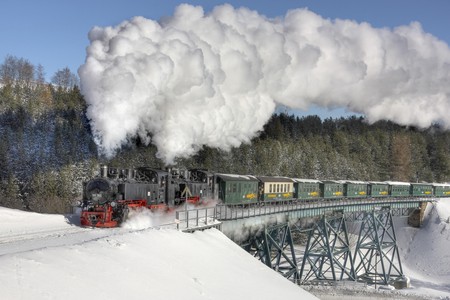 The Rügensche Kleinbahn (RüKB) is a narrow-gauge railway network operating on the island of Rügen, covering a distance of 24km (15mi) between Putbus and Göhren. The appeal of this rail line lies in the fact that many of the steam locomotives and wagons used in this network are more than 100 years old, allowing you to do a bit of time travel. The nostalgic train puffs through dense forests and snazzy beach resorts. Due to its leisurely pace (30kph/19mph), it’s affectionately known as Rasender Roland (Dashing Roland).

When you get to Göhren, the scenery takes on a whole new kind of appeal, with golden-sand beaches skirting the deep-blue Baltic Sea, overlooked by thick trees. Check into Travel Charme Nordperd & Villen Göhren for a day or two by the coast. It’s next to the train station and has an infinity pool and a spa. 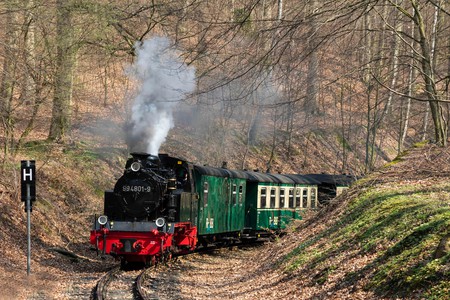