The Most Impressive German Sports Venues

Veltins Arena I © Ververidis Vasilis / Shutterstock
There’s no denying that football is king in Germany, with the Bundesliga games held in some of the sport’s most iconic stadiums. However, the country is also home to many other sporting venues that wow not only with their size, but also with their unique designs. Here’s our pick of the best.

Built for the 1936 Summer Olympics, the stadium originally fitted in a whopping 110,000 spectators. Today, the stadium is integrated into Berlin’s Olympic park, and after the 2004 renovations has 74,475 seats – still topping the charts of Germany’s largest arenas and ranking among the prime sporting venues worldwide. The Olympic Stadium has been the home ground of the football Bundesliga team Hertha BSC for the past 55 years but has also seen some of the most iconic international rock and pop stars, including Coldplay, AC/DC and Bruce Springsteen. 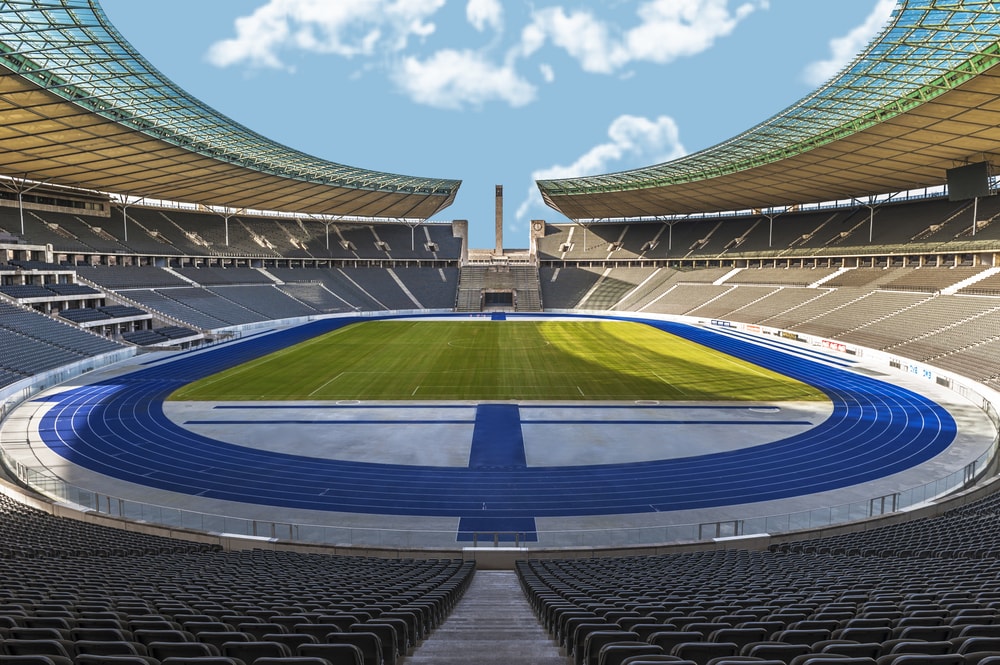 While Berlin’s Olympic Stadium boasts the largest seating capacity of Germany’s arenas, the Signal Iduna Park and the home ground of Borussia Dortmund fits a mind-boggling 81,360 people with seated and standing capacity combined. During home games, the somewhat wild and cheerful Dortmund fans create an electrifying atmosphere when 24,454 of them crowd together on Europe’s largest freestanding terrace and wave their flags. 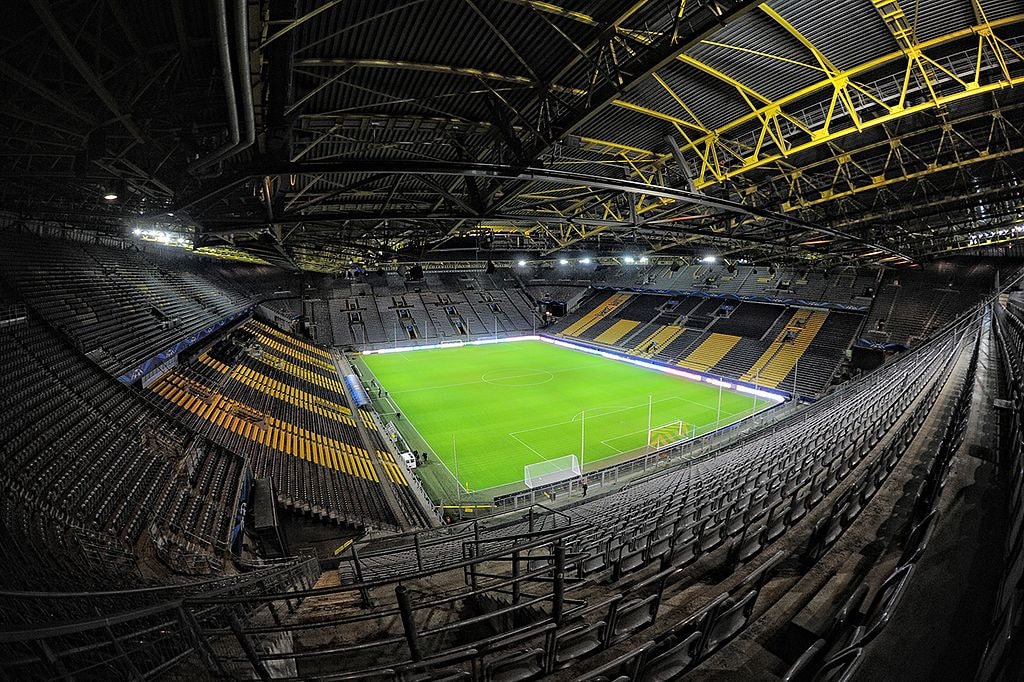 With a capacity of 75,000, Munich’s Allianz Arena is on Dortmund’s heel. When the arena opened in May 2005, the luminous facade was a sensation. Nearly 3,000 inflatable foil panels clad the exterior of the stadium, and each of them can be lit in either red, blue or white depending on which of the home teams is playing – Bayern Munich, TSV or the German national team respectively. The design has inspired the 2010 New Jersey MetLife stadium which shines in either blue or green in support of the two local American football teams – the Giants and the Jets. 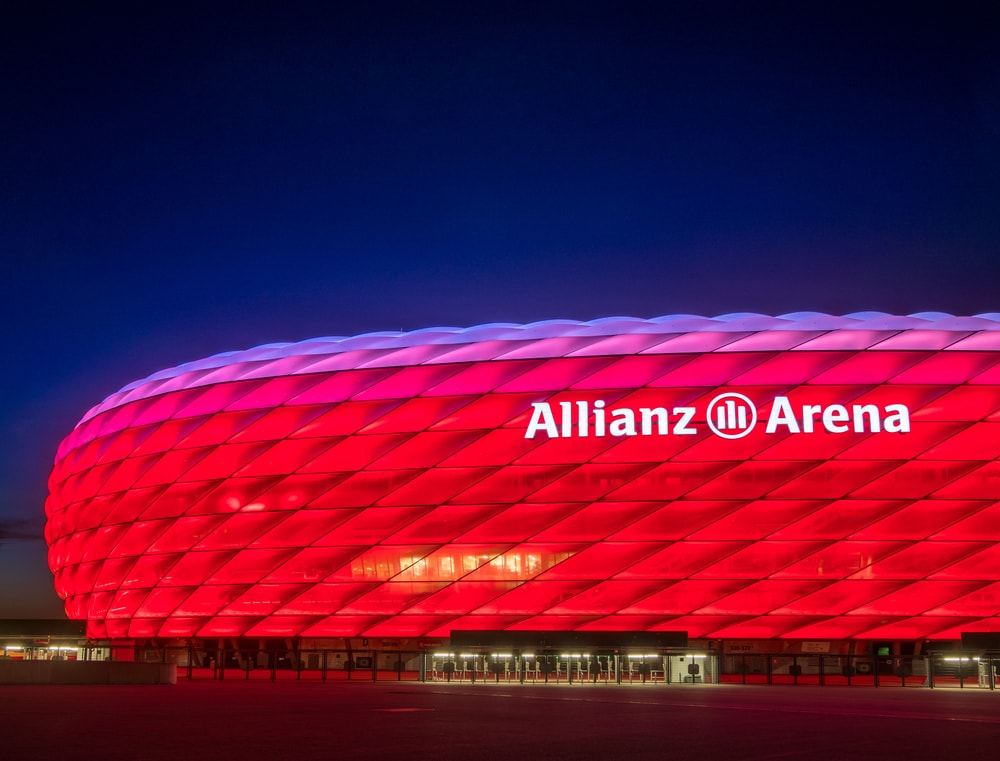 Since it first opened in 1932, the Hockenheimring track has been updated several times over the years, and the 2002 renovations boosted the stand capacity from 83,000 to 120,000 for those who want to watch race car and motorcycle drivers fly past on the 4.5 km (2.8 mile)-long circuit. The venue hosts several motorsports events, including the German Formula One Grand Prix every other year, as well as the German Touring Car Masters series, the Superbike IDM Racing Championship. 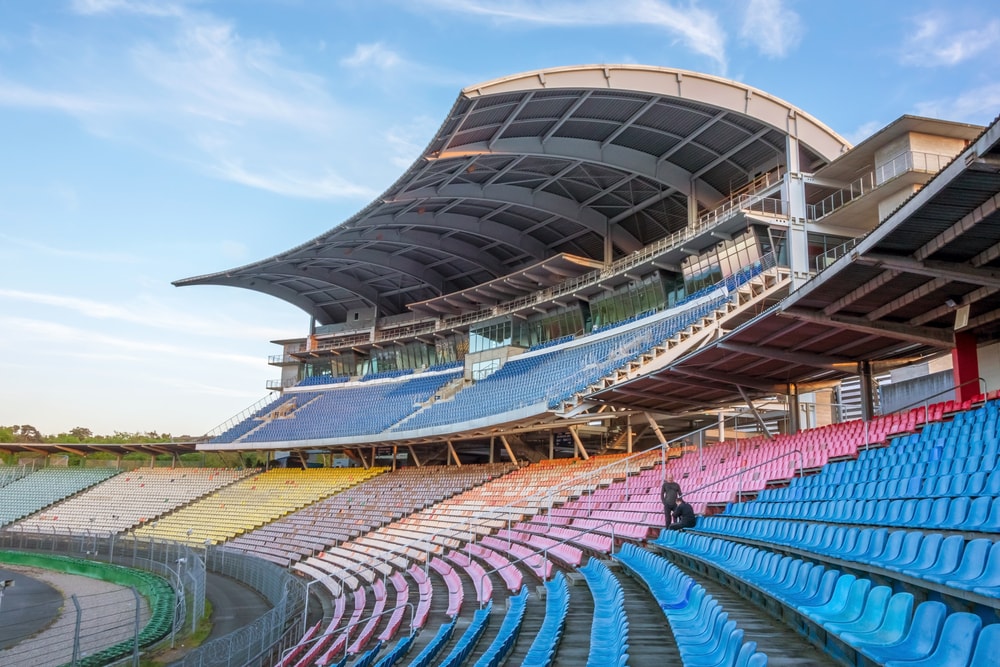 If you follow the Bundesliga, you’ve probably heard of Schalke 04 and their Gelsenkirchen stadium, the Veltins Arena. Sold-out home games see 62,271 people fill the seats and stands, but that’s far from the most impressive fact. The arena has some unique features. The football field sits in a drawer-like basin that can be pushed away non-game days and the southern stand folds away to create more space for non-sporting events. On a rainy day, the hydraulic roof shuts, and a unique 5 km (3.1 mile)-long pipeline pumps beer from the basement into the food stalls. 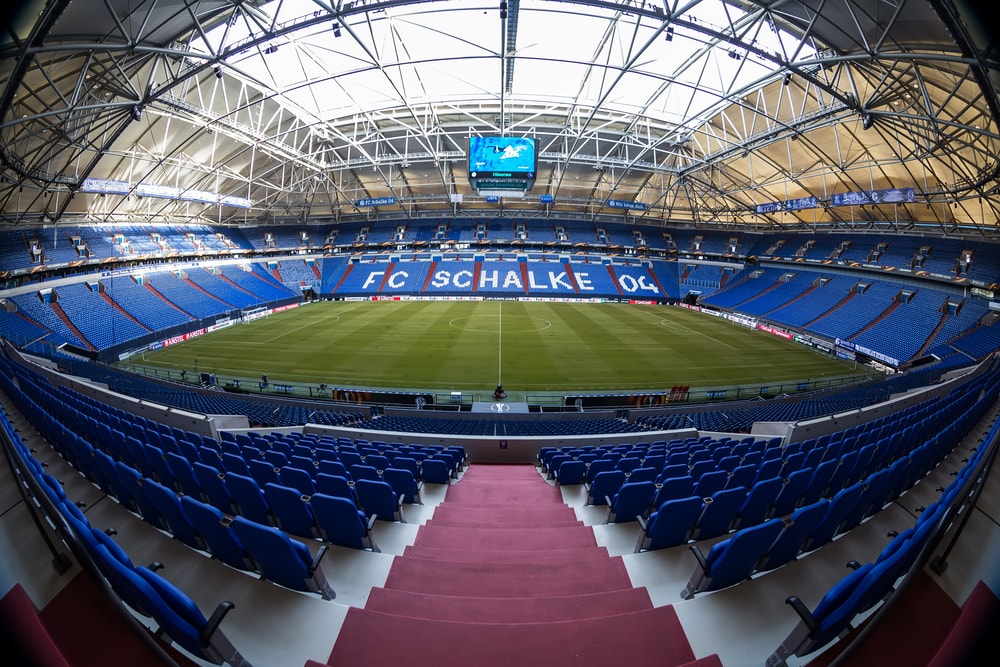 The world’s largest ski jumping hill soars over Willingen, a small town in Germany’s Sauerland region. Some 35,000 spectators flock here for the annual World Cup events, but the venue draws tourists to the site year-round. A cable car and an elevator take you up the ‘Adlerhorst’ tower and give you an idea of the head-spinning views ski jumpers have before they shoot down the ramp. 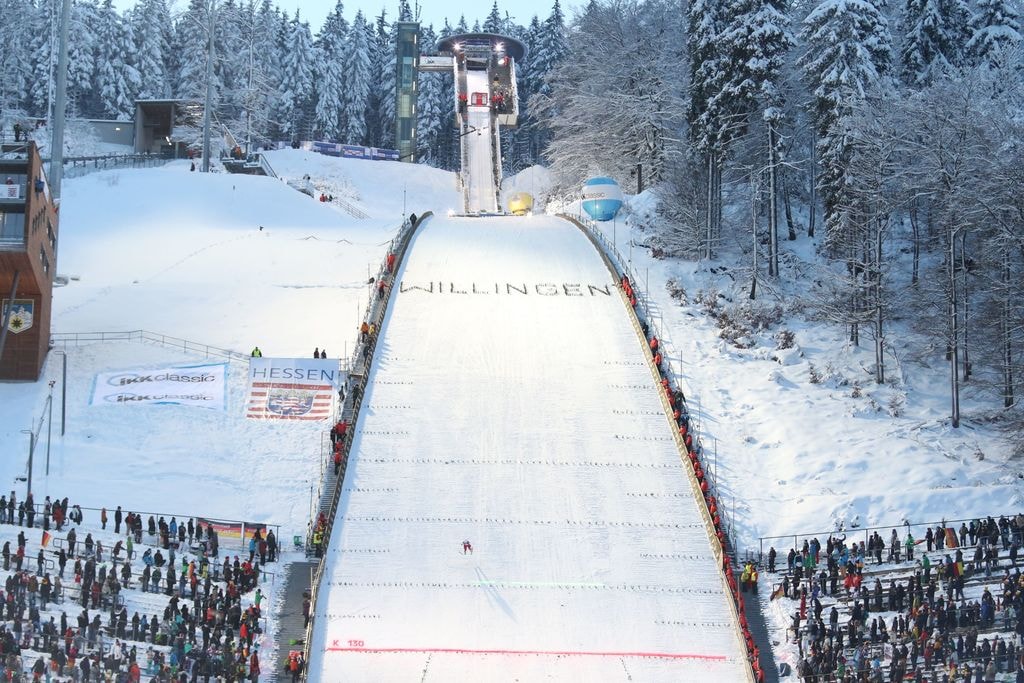 The arena is a multi-purpose venue and home ground of the Eisbären Berlin ice hockey club and the ALBA Berlin basketballers. Its construction devoured no less than €165 million and, depending on the event, the Mercedes-Benz Arena encompasses between 14,200 and 17,000 people. But the sports teams aside, Madonna, Lady Gaga, Iron Maiden, Rihanna and Adele have all filled the hall in previous years. 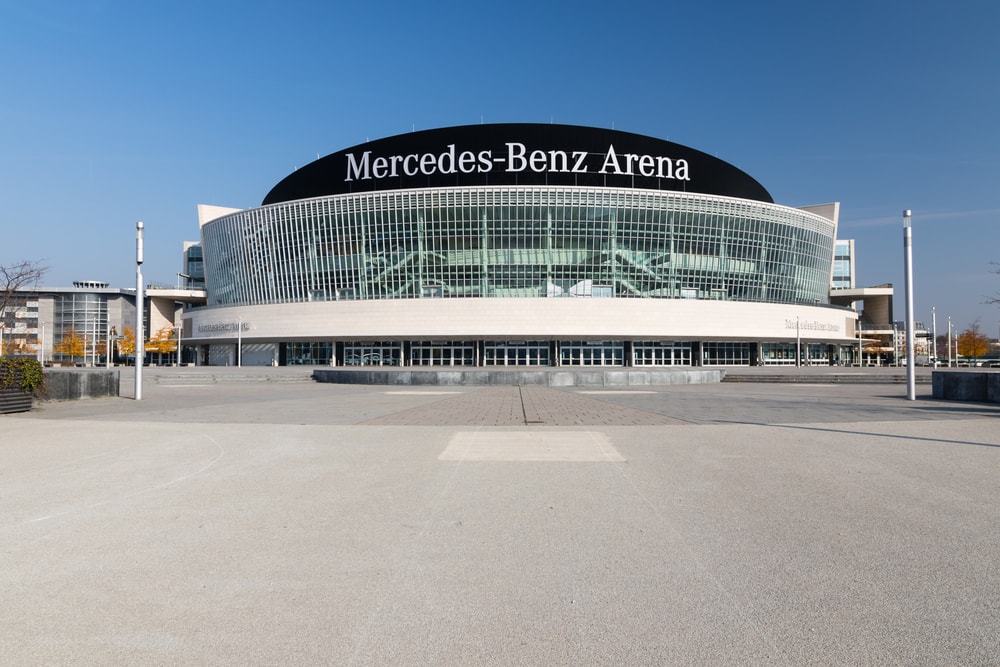 Stadium
With an original capacity of 80,000, the Munich Olympic Stadium was the centrepiece of the 1972 Summer Olympics. The venue has since seen numerous big football matches, including the World Cup Final in 1974 and the Euro Final in 1988, plus a multitude of open-air concerts of international stars from Michael Jackson to the Rolling Stones. The iconic tent-like roof was a sensation at the time and spans across the stadium and the neighbouring pool and the Olympic hall. The complex was landmarked in 1997.
Looks like it's closed Hours or services may be impacted due to Covid-19
More Info
Open In Google Maps
27 Spiridon-Louis-Ring, Milbertshofen-Am Hart München, Bayern, 80809, Germany
+498930670
View menu
Visit website
Visit Facebook page
Send an Email
Give us feedback

The SAP Arena in Mannheim was inaugurated in 2005 and has since been the home of both the city’s ice hockey and handball club. The venue fits a maximum of 15,000 and is on the smaller end of the scale, but it has hosted some important sporting and entertainment events since its opening – most notably the 2006 IBF title fight between Vladimir Klitschko and Chris Byrd. 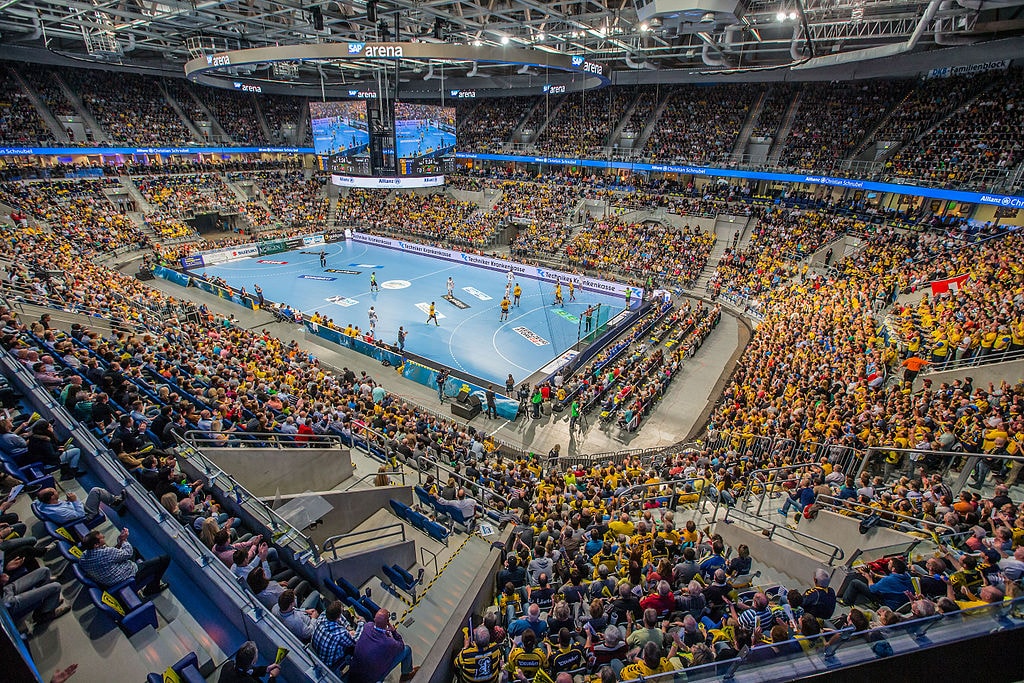 Germany’s second motorsports complex fits 150,000 people and thereby outranks the previously mentioned Hockenheimring regarding capacity. All major races are held on the 5.15 km (3.2 mile)-long Grand Prix track. The race lap record is held by one of the biggest Formula One stars of all times – Germany’s seven-time world champion Michael Schuhmacher.

Winterberg in the Sauerland region is a magnet for winter sports enthusiasts – that goes for amateurs as well as professionals. While visitors take on the ski slopes and cross-country trails, the Veltin-Eis-Arena hosts national and international bobsleigh and skeleton competitions. Participants shoot down the 1,609 metre (5,279 feet)-long run with speeds of up to 140 km (87 miles) per hour.

Veltins Ice Arena I © Groman123 / Flickr
Give us feedback