The Most Iconic Sites Along Germany's Industrial Heritage Trail 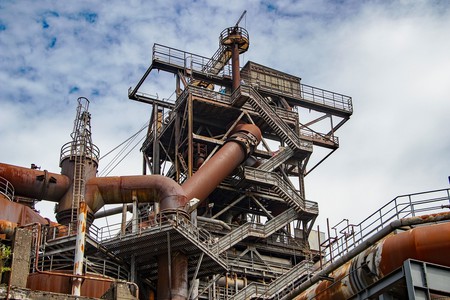 Germany’s Ruhr region played an integral part in the industrial revolution, and over 750 power plants and other industrial sites shaped the region more than anything. The 1998 Industrial Heritage Trail connects hundreds of industrial monuments, museums, vantage points and art installations between Duisburg and Hamm. Here are the most iconic sites along the way.

No other industrial site represents how much of an impact the industrial revolution had on the Ruhr Metropolis other than the world-renowned Zeche Zollverein complex in Essen. What’s often referred to the ‘world’s most beautiful coal mine’ was converted into a museum and event space after 140 years in operation and now proudly displays a UNESCO World Heritage Site tag. If you want to learn about Essen’s history as a coal mining capital and the colliery, you can join one of 30 different tour formats. 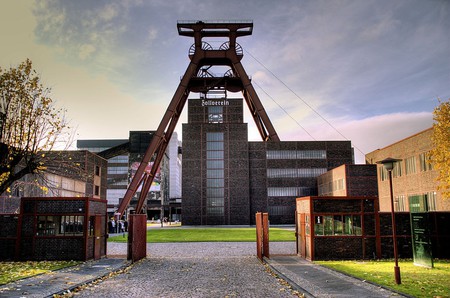 Initially built as an exhibition hall in the early 20th century, the nearly 9,000 square metres of today’s Jahrhunderthalle in Bochum was used as a gas power station. But since 1993, the site is associated with concerts, galas and art. After elaborate reconstruction work, the prestigious art and performance festival ‘Ruhrtriennale’ was added to the list of annual events in 2003, which now attracts more than 50,000 people every year alone. If you can’t make it for any of the events, you do have the option of booking a tour of the underground tunnel system and production facilities.

Rather than dismantling the disused steel factory, the 180-hectare complex was converted to the Duisburg Landschaftspark. The rail tracks, bunkers, sewage canals, blast furnaces and conveyer bridges have been transformed into a whole range of attractions, including walking trails, observation decks and gardens, and the former gasometer now even houses a scuba diving training facility. From Friday through to Sunday nights, the entire complex is illuminated by colourful neon lights. You can either explore the complex at your own pace free of charge, join a guided tour or book tickets to one of the many events taking place throughout the year.

If you’re hoping for a cold glass of beer during your visit to the Lindenbrauerei site in Unna, you’ll be disappointed, but it’s worth checking out anyway. The legendary brewery hit a nerve with their iconic Linden Pilsener, but production ceased in 1979. Now, the site houses a cultural centre upstairs with workshops, events and the like, while the former underground cooling chambers are home to surreal art installations by international creators. The highlight is a piece by American light artist James Turrell titled Third Breath.

The make-do-and-mend motto also helped convert another Duisburg site. Two German artists, Heike Mutter and Ulrich Genth, took waste from a former zinc-smelting factory and other industrial debris and turned it into a futuristic art installation. Their work goes by the name Tiger & Turtle Magic Mountain and sits just outside of Duisburg. From afar, the steel structure looks like a rollercoaster, but a closer look reveals 240 steps up to the loop which only allows visitors to climb the structure for bird’s-eye views of the area. The whole setting looks even more surreal after dark when the artwork is lit up by LEDs. 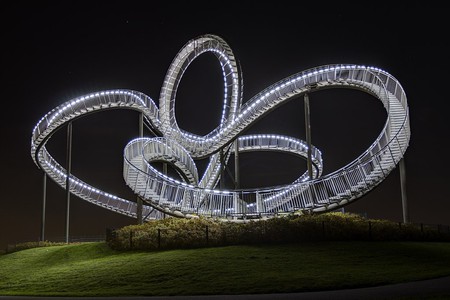 The Gasometer in Oberhausen is one of the most important landmarks of the Ruhr region, and its reconstruction in the 1990s put it to good use. Instead of a gas storage facility, the large reservoir now functions as unique exhibition space and event venue. A glass-fronted elevator takes you up to the top floor on the inside, from where you can reach the outdoor observation deck. You can overlook the surrounding region, including the Olga’s Rock venue on the other side of the river.

In 1984, the Maximilian colliery in Hamm was redeveloped as a leisure park. The coal preparation plant turned into an artwork in the form of a giant glass elephant which now towers over the site. At his feet are flower beds, vast meadows and gardens with forested areas and playgrounds, as well as a butterfly house. Throughout the year, the park hosts a plethora of events ranging anywhere from live music performances, stand-up comedy and dance to flea markets and children’s festivals. 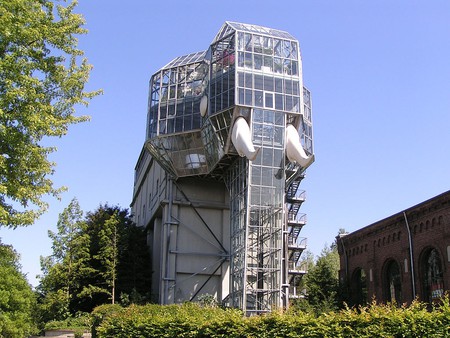 Elephant structure at Maximilianpark | © Picture8 / WikiCommons
Give us feedback