The Most Beautiful Spots to Watch the Sunset in Cologne 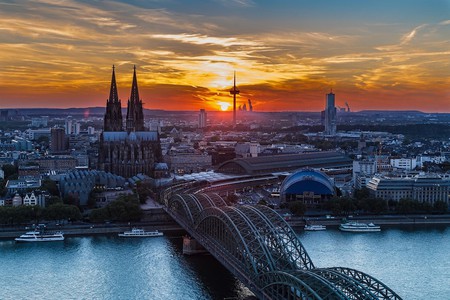 Cologne might not be Germany’s most beautiful city, but the golden hour before sunset adds to the city’s charm. The right side of the Rhine river has some great and romantic locations to view the sunset. Here are six of the most beautiful spots.

The newly developed outside staircase at the Rheinboulevard of Cologne’s right riverbank has become a favourite spot to watch the sunset behind the cathedral and the old townhouses across the river. Once it’s dark, you can either head to the Rheinterassen for a cocktail, or take a stroll over Love Lock bridge, which takes you back to the city centre.

Walk across Love Lock bridge, take a right and climb the stairs to the waterfront promenade and you will arrive at one of Cologne’s popular photo stops. Sunset and nighttime views of the bridge and the cathedral on the other side rank among the most photographed motifs of the city, and you will quickly see why. 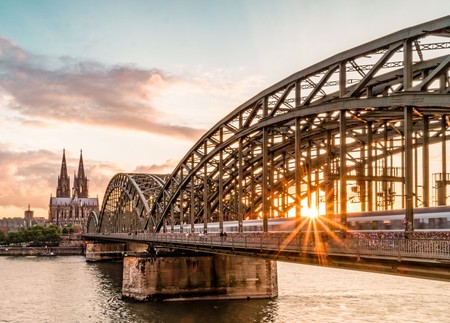 Towards the eastern end of the city, you can cross the Rhine river via the Zoobrücke, with the botanical gardens on one side and the Rheinpark and Claudius Therme on the other side. From atop you will have an excellent view over the river with the cathedral, Musical Dome and Colonius tower to your right, and the Rheinterassen with the park, Tanzbrunnen venue, and the Cologne fair trade grounds on the left, and the cable car crossing above.

The viewing platform on the 29th floor of the tower gives you great panoramic views over Cologne all day long. During sunsets, it provides arguably the most picturesque scenes you will find in the city. You can see the Hohenzollern bridge in the foreground, followed by Cologne Cathedral, the old town skyline and the northern city boundaries all lit up in dark orange. 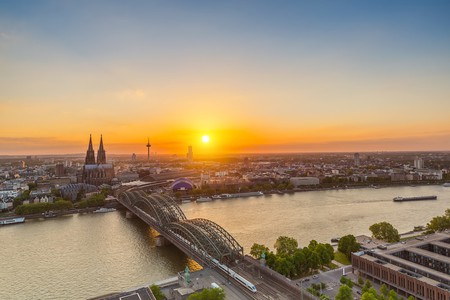 The park is perfect for children’s daytime activities but also for romantic evening dates. When the sun sets on the other riverside, couples scatter across the green leafy park and the pebbled waterfront and watch Cologne’s skyline, with the St. Kunibert Basilica, the Musical Dome and the cathedral, become bathed in warm light.

The vast meadows covering the riverbank of the right-side Poll quarter are a great escape from the hustle and bustle of Cologne’s centre but still close enough for great sunset views over the Rhine and major landmarks. From that side, you’ll have a different perspective with the three modern and glass-fronted Kranhäuser standing in contrast to the silhouette of the Dome. 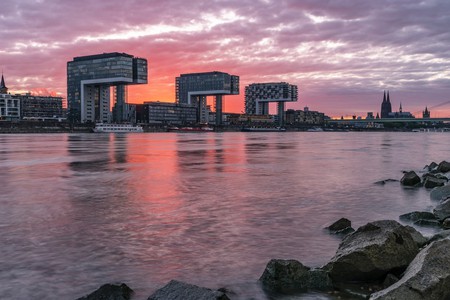