The Most Beautiful Churches And Cathedrals in Cologne

The beautiful and historically rich city of Cologne is the fourth largest city in Germany and the current population is slightly over one million. The city has been around for over 2,000 years and one of its biggest attractions the Cologne Cathedral, which includes a knee-trembling 509 steps which lead to a breathtaking view of the city. Here’s a list of some of the other most beautiful churches and cathedrals located in Cologne. 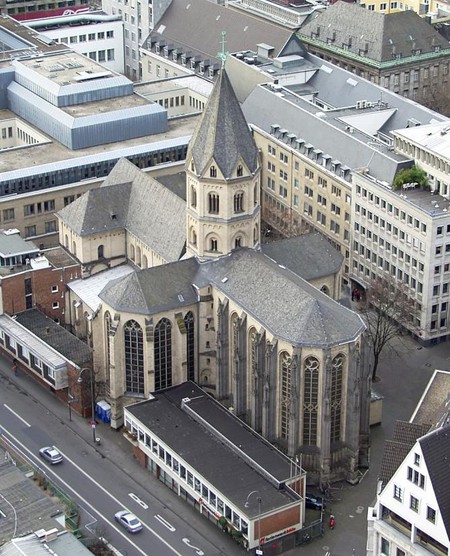 The first church on our list is St. Andreas (St. Andrews), which was founded by Archbishop Bruno in 974 and was later rebuilt in Romanesque style along with a blend of its Gothic style. The church also contains a sarcophagus of St. Albert Magnus.

The Basilica of the Holy Apostles

St. Apostle is also known as the Basilica of the Holy Apostles and is built into the core of the city. Construction began around 1000 and, a few centuries later, the church expanded by adding an octagonal dome, giving it a Byzantine representation. St. Apostle’s Church also has a single tower that stands approximately 219 feet tall.

St. Cecilia’s Church was built between 1130 to 1160. It is one of the oldest churches in Cologne and is filled with exclusive textiles and enticing stained-glass windows dating back several centuries. Around the 1950’s the church was slightly renovated and now houses the Schnütgen Museum of Medieval Art.

St. Gereon’s Basilica was built around 350 and used to contain the largest dome in the Western hemisphere between the 6th and 15th century. In 1898, German builder Ernst Seifert created an organ inside the church. Often times, experts and tourists compare St. Gereon’s Basilica to the Hagia Sofia in Istanbul, Turkey due to their similar, striking architecture.

The Basilica of St. Ursula

The Basilica of St. Ursula was given its name after Princess Ursula was killed along with 11,000 other females by the Huns, so the legend goes. The church is built upon the graveyard of the 11,000 virgins and includes Gothic architecture. A section of the basilica consists of an area called the ‘Golden Chamber’ which contains relics and remains of the virgins.

Last but certainly not least, the most prominent cathedral in all of Germany is certainly Cologne Cathedral. It is Germany’s biggest monument attracting over seven million visitors a year and has been standing since 1248. An unknown fact about the cathedral is that the northern tower is seven centimeters taller than the southern one. It has often been referred to as “a masterpiece of exceptional intrinsic value” (UNESCO World Heritage Sites), and is one of the most breathtaking examples of Gothic architecture in Europe.