The Most Beautiful Buildings in Speyer, Germany 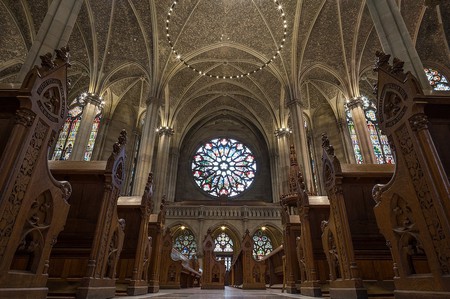 Speyer is up there with Germany’s oldest cities, with origins dating as far back as 10 BC. The city boasts numerous impressive landmarks, some of which have been decorated with the UNESCO World Heritage Site tag. We had a look at Speyer’s most beautiful buildings and came up with the following list.

The undisputed top of the list of Speyer’s most impressive and renowned buildings is Speyer Cathedral. Construction of the red sandstone church began in 1030 under Conrad II, and over centuries, the cathedral was enlarged, reconstructed and altered. Despite several occupations and wars, Speyer Cathedral has maintained the overall look of its 11th-century Romanesque appearance. Typical elements, such as the vaulted nave and the two sets of towers at each end of the building set the standard for the construction of churches in the Rhineland region. 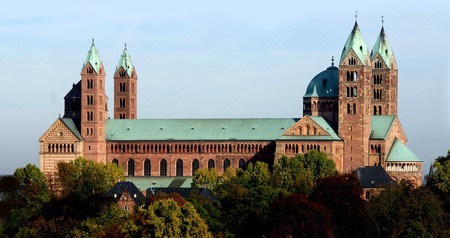 In 1294, Speyer became a Free Imperial City and subsequently earned the right to mint and issue coins. The minter’s house was built facing the old market square and the cathedral ahead. But as with many of Speyer’s old houses, the building was devoured by the flames of the Great Fire in 1689. The Old Mint was constructed in its place in 1748 as a new market centre and has since served as an integral point of trade and seat of municipal authorities. The baroque facade stands out from the surrounding pastel-coloured houses of Maximilian Street and today is home to a couple of ground-floor shops and the city treasurer office.

Maximilian Street is Speyer’s main drag and seamed with historic buildings. The Old City Hall is one of them, easily identified by the red facade. It was constructed between 1712 and 1726 and stands in the place of the former municipal chancery which was destroyed in the Great Fire of 1689. The highlight is the Rococo-style council chamber which these days often hosts concerts.

Speyer’s Trinity Church is considered a gem of Baroque and ecclesiastical architecture. When the Great Fire destroyed the city in 1689, a lot of people fled to the neighbouring Frankfurt. Construction of Trinity Church started in 1701, and it’s the city’s oldest Protestant church today. The interior decor is still in its original condition and composed of intricate wood carvings and the dome fresco depicting biblical scenes. 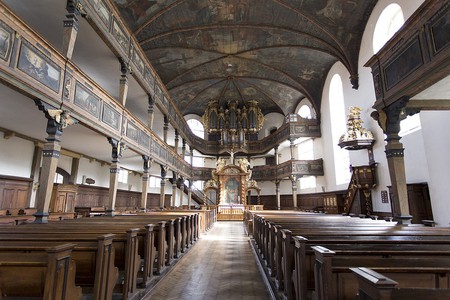 Historical Museum of the Palatinate

The historical museum occupies a beautiful four-winged building that was designed by a German architect and first opened its doors in 1910. The entrance is flanked by two towers and leads to an exhibition dedicated to the history of the region. Approximately 400,000 guests flock to the exhibition every year which is split into five sections – the prehistory of the Palatinate, Roman times, the church history, the modern era and the 2000-year-long tradition of winemaking in the area.

The Old City Gate, or how locals say: Altpörtel, marks the end of Maximilian Street and in the Middle Ages served as Speyer’s western city gate. Its construction started in 1230, but over centuries elements were added until it had reached today’s imposing 55-metre appearance. The facade boasts some interesting features, such as the tower clock and a reminder of Speyer’s historical measuring unit the Speyerer Werkschuh. But it’s well worth climbing up the tower for panoramic views of the city centre. 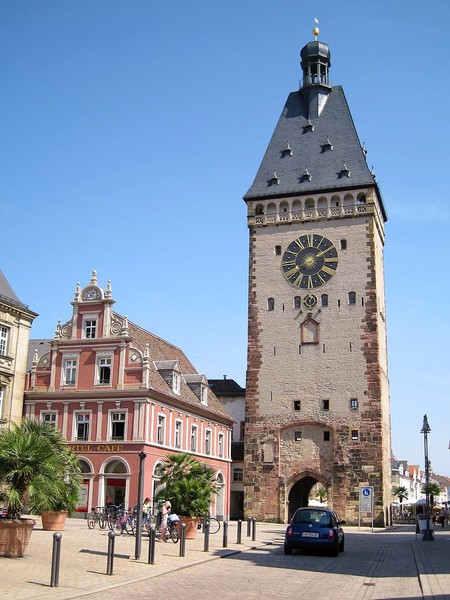 The tower of Speyer’s Memorial Church soars 100 metres into the sky, towering over the city and every other church tower in Palatinate. The neo-Gothic church was constructed between 1893 and 1904 to commemorate the 1529 Protestation at Speyer when six princes and Protestant representatives of 14 of the Imperial Free Cities – the protestants – signed a letter protesting against a ban of Martin Luther and his teachings. The inside holds statues of the six princes and Martin Luther, as well as beautiful stained glass windows in the apsis which were gifted by the German Emperor Wilhelm II.