The Most Beautiful Buildings in Cologne 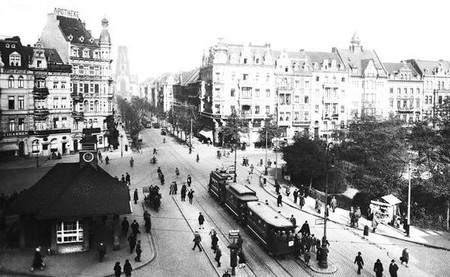 Ebertplatz, Cologne in 1910, via Wikimedia Commons

Around 75% of Cologne was destroyed by Allied bombs during the Second World War, largely because it was close enough to mainland England, so planes wouldn’t have to refuel for the return journey. In places such as Rotterdam, city planners gave architects permission to build whatever crazy buildings they wanted. In Cologne, the plan was mainly to get something, anything, up as quickly and cheaply as possible. 80 years later, the city is still not the prettiest, but it has enough notable buildings to keep things interesting.

Before the Kristalnacht in 1938, there were five synagogues in Cologne. The neo-Romanesque synagogue on Roonstr, in the centre of town, was rebuilt along with the rest of the city in the 1950s. The building has three arched doors and gabled façade with a central rose window, but its best feature is the blue dome inside. It is possible to tour the synagogue and have lunch at the kosher café onsite, but reservations must be made first by email or phone.

Kunibert, Ursula, Gereon, Andreas, Groß St, Martin, Aposteln, Cäcelien, Maria im Kapitol, Maria in Lyskirchen, Georg, Pantaleon and Severin – the 12 Romanesque Churches in central Cologne. For 1000 years, the city has been a centre of pilgrimage, with the number of churches reaching 600 at one point. These days, there are just 250, about 65% of which are Catholic. After the war, it took 40 years for the final church in the group to be fully reconstructed. Each one is its own combination of old and new.

Take a guided tour or just have a wander round on your own. The pastel-coloured buildings next to the Rhine give a small glimpse at what the Medieval city would have looked like when the Rathause (City Hall) was the real seat of power in town. The 200 year old Hänneschen puppet theatre is a great spot to stop by for a mid-afternoon rest and a laugh or any one of the breweries or cafés from Heumarkt to Eigelstein and back down to the river.

Finally opening in June of 2017 after years of construction delays and disagreements, the DITIB Mosque in Ehrenfeld is determined to be a place for all Kölners. The architect, Paul Böhm is the son of the church-building architect Gottfried Böhm. Visitors are encouraged, head scarves are not required but – like cathedrals – it is respectful to cover legs and shoulders.

Most of Cologne’s most beautiful buildings are private houses and little pockets of various neighbourhoods that survived the bombing relatively intact. The best way to see what the city used to look like is to take a walk. Here are three short ones that will give you a taste.

Leipzigerplatz is about 300m from Ubahnstation Florastr in the northern Cologne neighbourhood of Nippes. Practically untouched, this leafy square and the neighbouring streets on the way to the Botanical Gardens are full of architectural gems from many periods in history.

One of the grander neighbourhoods in the city, Südstadt centres around the Ubahn station Chlodwigplatz, reachable from the town centre on the 12 and 15 lines. A nice wander through the side streets from the Rhine to the Volksgarten and back, with a stop at Die Fette Kuh for lunch, is a great way to spend a sunny afternoon.

Start just a few hundred metres west of Friesenplatz at the corner of Venloer and Spicherstr just at the edge of Stadtgarten. Walk north past many handsome houses old and new and end up in Mediapark, the ultra modern office tower complex in front of a massive park.

In 2007, the Kolumba Museum, one of the oldest in the city, moved into its new home designed by architect Peter Zumthor. Unusually for a museum, the building is made from highly tactile materials like clay plaster, Jura limestone, wood, and leather and silk textiles, making it as much a pleasure to touch as to look at. In addition to the small but fine art collection, the building encases the Gothic ruins of the Romanesque Church of St Columba and the 1950 replacement build by Gottfried Böhm. Loads of daylight and expansive rooms make the building a delight, even if religious icons and decorative art aren’t really your thing.