A Voyage Through Germany: the Lowdown on River Cruising 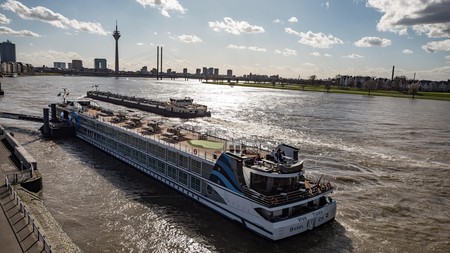 A river cruise along the Rhine on the VIVA TIARA includes a stop in Dusseldorf, capital of North Rhine–Westphalia | Courtesy of VIVA Cruises

You probably haven’t considered going on a river cruise. You might not think it’s for you. You might even think it’s just something for your grandparents to do. Well, you might be wrong. Here’s what I found spending a few days floating down the Rhine on VIVA TIARA, a VIVA Cruises ship.

What exactly is a river cruise?

A river cruise is different to the classic ocean liner excursion. Apart from the obvious – we are indeed talking about cruise ships travelling on rivers – the most crucial distinction is that being on the boat is only half the fun; the rest is exploring the cities and towns where the ship docks. Of course, ocean liners do dock. But river cruises allow for more frequent onshore excursions and don’t have days spent solely at sea. A trip along the Rhine, for example, weaves through major destinations including Dusseldorf and Cologne and magical lesser-known spots such as Koblenz. 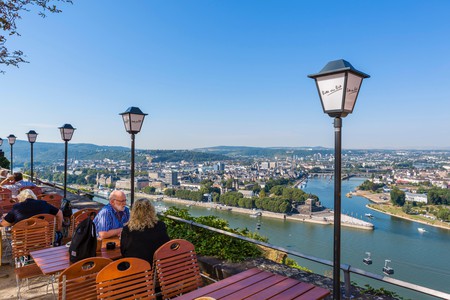 Most Rhine tours will stop at the scenic city of Koblenz, where the Rhine meets the Moselle | | © Ian Dagnall / Alamy Stock Photo

The Rhine also pops into Switzerland, France and the Netherlands, while a cruise on the Danube can take you through Vienna, Budapest, Belgrade and many more of the most interesting cities in Europe. It’s like a far more relaxed version of interrailing – you cover vast regions of natural beauty and cultural richness without the chaos of planning it yourself (and without the discomfort of sleeping wherever is most convenient).

How else is it different to an ocean cruise?

There are cruises – on rivers and seas – for all kinds of travellers, and ships come in all shapes and sizes. However, as a rule, ocean liners are far larger with many more passengers. So an ocean cruise tends to be a resort-style experience, where it’s all about the on-board activities and entertainment. This makes it a more rowdy, less relaxing experience, with an awful lot less culture. The views can be repetitive too – an endless blue horizon is often far less interesting that gazing across the river to see castles, towns, and people going about their day.

Rooms are cosy on the TIARA, with comfortable beds and floor-to-ceiling windows | | Courtesy of VIVA Cruises

Perhaps the most surprising revelation was just how soothing my trip down the Rhine was. I only spent three nights on board and was devastated to leave. That’s because, from pretty much minute one, I felt an intoxicating sense of escapism and peace of mind. The ship is it’s own little world, where everything seems to take care of itself. The staff were incredibly friendly and attentive; the ship is small enough to feel homely yet big enough to avoid claustrophobia – especially with a large deck and rooms with floor-to-ceiling windows, which you can open to let the fresh river air flow through.

There is even a small spa onboard the TIARA – it’s no surprise VIVA are planning tailor-made wellness cruises in the New Year. It already feels like a wellness experience.

VIVA takes all-inclusive to mean ALL-inclusive. So you have zero inhibitions when tucking into your buffet breakfast, three-course lunch or three-course dinner, or ordering that extra glass of wine from the bar. It gives you freedom to indulge, perhaps try new things, or simply treat yourself to the things you love. And the food on the TIARA was a pleasant surprise. This is no mass-catering canteen fodder. This was proper food made by proper chefs, embracing local culture and ingredients. 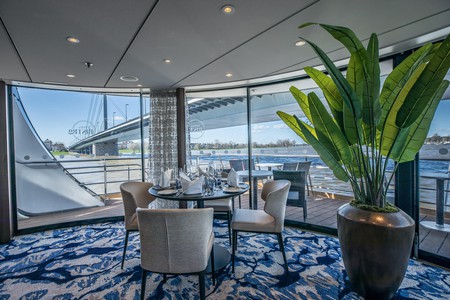 And then there’s the joy of being able to see so much while feeling so relaxed. VIVA organises paid excursions at most stops. You should book the ones that catch your eye, but also enjoy the independence to do your own thing – whether that’s hitting galleries and museums or simply strolling around town, grabbing a coffee and getting a feel for the place.

Rhine cruises are particularly popular around November and December, which is when I went, as German cities become the very definition of Christmassy. Explore the mesmerising markets, sip glühwein (mulled wine) and soak in the festive cheer. You can even use it as a chance to get some Christmas shopping done, or perhaps to add to your bauble collection.

Will I get motion sickness?

Even if your sea legs are jelly, you shouldn’t suffer on a river cruise. If anything, the subtle motion adds to the soothing nature of the experience. It’s far more comfortable than a plane or a train, and nothing like your awful experiences on ferries and rocky boats. It’s like being on a slow, smooth train. Or like airport travellators – gently shifting you downstream at a pace steady enough to appreciate the beauty of your surroundings. There is something so serene about waking up in the morning, pulling those curtains aside, cracking open the window and breathing in the fresh air, with a moving portrait right before your eyes.

Thinking that river cruises are just for the elderly is the biggest stumbling block for many, but don’t make your mind up so quickly. It is true that cruises, in general, tend to have an older demographic, and there’s a fair chance you might feel like you’re at your grandma’s birthday party, but that’s no reason to write off a river cruise. It makes sense that the older generation would be attracted to the steady combination of culture and all-inclusive relaxation. But does that affect your trip? You can socialise as little or as much as you like, while off-shore adventures can be moulded to your tastes.

If you’re looking for adrenaline-fuelled thrills then you are looking in the wrong place, and you may not have the levels of spontaneity that a road trip offers. But, other than that, stereotype is the only thing that could get in the way. In which case, let go of your ego – age is just a number – and, if the experience sounds like your cup of tea, go for it. 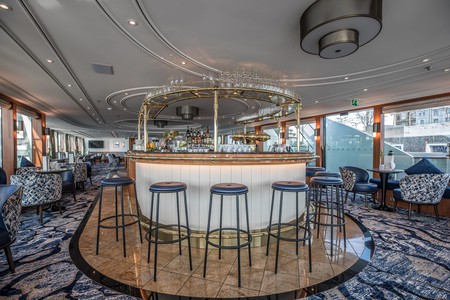 The bar in the VIVA TIARA lounge offers a wide selection of beers, wines and cocktails, all included in your stay | | Courtesy of VIVA Cruises

VIVA Cruises tend to lie between £100-£150 ($133-$200) per night. So not cheap, but good value for money. Compare it to a four-star hotel in a European city, with three excellent meals a day, free spa access and city-to-city travel included, and those numbers start to look very favourable. And if it still sounds a tad pricey, remember the free bar – you can always make up for it at the free bar.

What are the most popular river cruises?

Although there are great cruises all over the world – the Mekong in Asia and the Mississippi in the US, for example – Europe reigns supreme when it comes to river cruises. There’s the aforementioned Rhine and Danube, but also the Seine and Rhone in France, the Douro in Portugal and many others, as well as sea-river hybrid cruises, particularly popular in Scandinavia.

What is the best month to take a Rhine river cruise?

Different cruises suit different times of year. I had to wrap up warm on the November trip, and the deck was more for strolling than sunbathing, but there was something warming about seeing the romantic Rhine region at this time of year, particularly when exploring the cities and their Christmas markets. Others, like the wine regions along the Rhone and Douro, might suit a trip in summer.

Why book with VIVA Cruises? 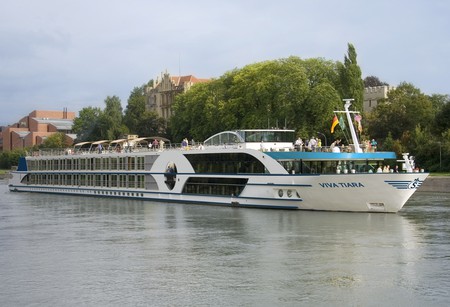 My time aboard the VIVA TIARA was overwhelmingly positive. It’s crucial to read up on your provider before booking since different companies – and even different ships and trips – can offer different experiences. VIVA strikes a beautiful balance between modernising the cruise experience and maintaining a sense of class and sophistication. The VIVA ships are designed with an extremely thoughtful touch mirrored by the wonderful staff. The rooms are lovely, the food excellent and you could spend all day in the communal areas. You maintain your sense of freedom and independence while simultaneously embracing the carefree wonder of having all the stressful parts taken care of.

VIVA cruises are varied and cover all the main European routes. They also design excellent themed journeys, including festive cruises, crime cruises – for fans of crime authors – and the highly anticipated wellness cruise, coming in 2022.

So if you like the idea of slow travel that blends ultimate relaxation with cultural exploration, across a large stretch of land that can cover a country or continent, then perhaps it’s time for you to consider river cruising.

Learn more about the full selection of VIVA Cruises excursions.