The History Of The World Clock In 1 Minute 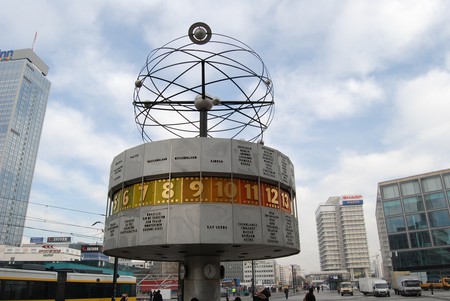 Like its towering neighbor, the World Clock, or Weltzeituhr, was constructed as a part of the redevelopment of this square during the GDR reign. This impressive clock was constructed to reflect the 24 time zones on its circular head. So depending on where one is standing, any time in the world can be shown.

Built in 1969, it is one of Alexanderplatz‘s most distinguished and visited features to this day. Tourists and locals alike use this famous structure as a meeting point, when smart phones can’t come to the rescue. It weighs 16 tons and is ten meters tall. It stands out without being obtrusive. Before this World Clock stood tall, there was another tower riddled with time discovered during the demolition of Alexanderplatz in 1966. It was an old street clock made by a clock factory called ‘Urania,’ referred to as ‘Urania’s Column.’ In an attempt to revitalize Alexanderplatz after it bared the weight of many atrocities during WWII, a contest was set up to create a replacement for Urania’s Column, a contest won by Erich John. 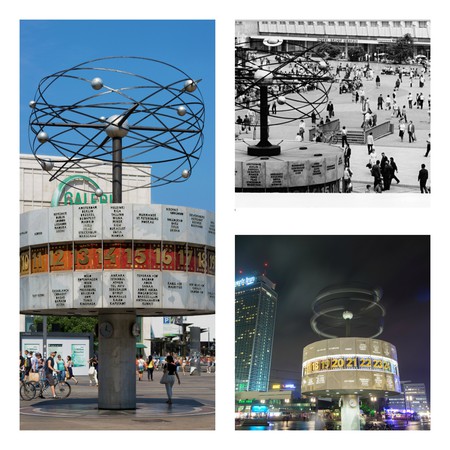 The design is supposed to represent a sort of socialist modernism – this coupled with the TV Tower were curated to be gifts for the 20th anniversary of the GDR. With Erich John, along with volunteering members of the optical factory in Rathenow, in addition to his colleagues from the college of Fine Arts in Berlin, it only took nine months for the World Clock to be completed.

In 1997, it received some refurbishments and some extra cities like Tel Aviv and Jerusalem, which had previously been deemed politically undesirable cities to the GDR. The famous metal sculptor Hans-Joachim Kunsch was put as overseer of these touch-ups. It stands today with all 24 time zones and a reductive solar system on its head that rotates once a minute. It has become a prominent symbol of Berlin and a beloved fixture of Alexanderplatz. There’s even a legend that states if lovers are holding hands at midnight adjacent to the tower, they will be together forever.