The History Of The New Synagogue In 1 Minute 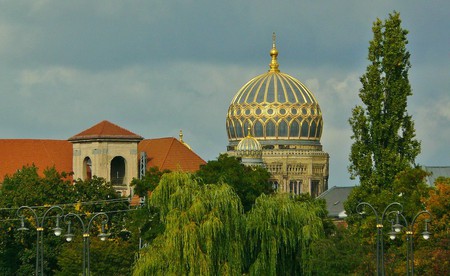 The New Synagogue, or Neue Synagoge, was designed by the architect Eduard Knoblauch in the mid-nineteenth century. It is a prominent symbol not only in the Jewish community, but in Berlin‘s culturally significant and historically profound fabric that makes up the city’s metaphorical architecture.

After the original architect Knoblauch passed away, his architectural contemporary, Friedrich August Stüler, took over. Though Knoblauch receives a great deal of credit, it is Stüler who is truly responsible for the majority of the interior and exterior construction. It was inaugurated in 1866. At the time it was built, it was the largest of its kind in Germany.

The synagogue is lauded for not only its beauty and size, but for being one of the only synagogues to survive Kristallnacht, an awful night where Nazis burned many of what the Jewish community held dear in order to send a message and to destroy the last few pillars of hope. Though the interior was trashed and much damage was done, it remained largely intact. This is mainly due to one brave Lieutenant named Otto Bellgardt, who drew his pistol to protect the historical landmark. As other areas were being closed to the Jewish community, the New Synagogue remained open for a while as a place for lectures, meetings, concerts, etc., but usage was reduced to the main hall. Eventually this was taken away as well. 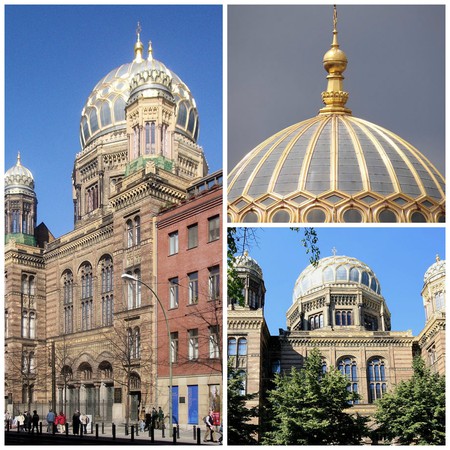 In 1942, during the infamous Allied bombings, much of the New Synagogue was destroyed. The building was largely left in ruins. After the war, it took time for things to take shape. The Jewish community was divided into East and West sectors in the hopes of avoiding the persecution that was still trickling out after the war. The New Synagogue fell under the jurisdiction of the Eastern congregation, and they were eventually forced to demolish the New Synagogue. Its reconstruction began after the Wall between East and West fell, and this is what is responsible for the building we experience today, especially the iron construction.