The History of The Neue Wache In 1 Minute

Neue Wache | © Ansgar Koreng/WikiCommons
Originally commissioned by King Frederick William III of Prussia in 1816 to be the new guard house for the royal family, The Neue Wache building, still very much intact, is used as the Central Memorial of the Federal Republic of Germany for the Victims of War and Dictatorship.  Rich in history and architecturally significant, the Neue Wache building is a prodigious landmark in the capital.

Placed on the bustling boulevard of Unter Den Linden, it rubs elbows with Humboldt University and the Zueghaus. Its neoclassical architecture is thanks to Karl Friedrich Schinkel, who was the demonstrative figure in the Greek architectural revival movement that took place during his time. His intent was to keep the building as open as possible, as seen by the columns and the courtyard. Like many buildings in Berlin, it has seen many tumultuous political and social tides, bearing witness to monarchy, fascism, disintegration, and reunification. Starting as a royal guard house until the devastation of World War I, it now serves as a house of remembrance. 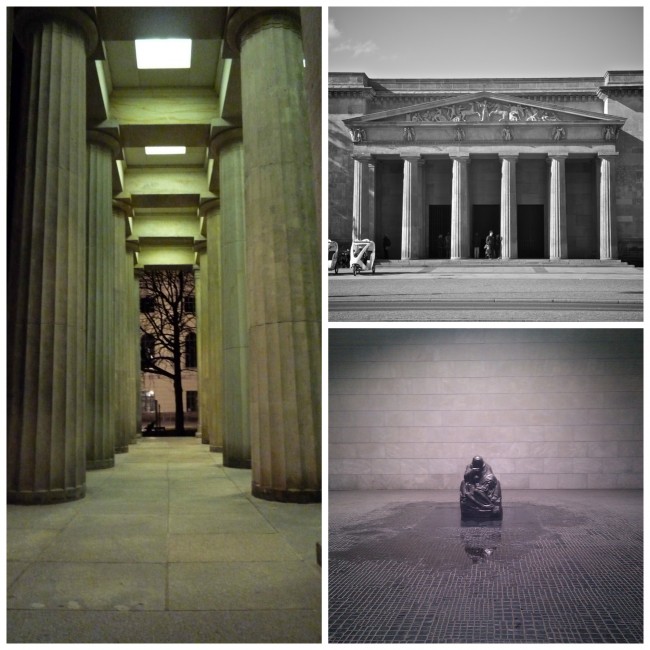 In 1931, Heinrich Tessenow was commissioned to reappropriate the building, in order to pay homage to those who died in the war. Later, the Nazis would take it over as a place to throw political parties like the annual Heldengedenktag, until it was too damaged from Allied bombings. During the separation, it fell in the Eastern sector and was under the control of the GDR, during which time the leader Walter Ulbricht had two statues removed, one of  Gerhard von Scharnhorst and the other Friedrich Wilhelm Bülow.

In the spirit of its post-World War I nature, the communist party had it remodeled and reopened in 1960 as the Memorial to the Victims of Fascism and Militarism. They commissioned a piece of their own to be on display in the Neue Wache: a glass prism with an eternal flame. In 1993, when it was reopened as what it is today, the Soviet memorial was removed from the building upon the request of many. The sculpture Mother with her dead son by beloved German sculptor, Käthe Kollwitz was enlarged under the oculus.