The History Of The Altes Museum In 1 Minute

The Altes Museum is one of the many that make up the Berlin State Museums and is located on the cultural pangea of Museum Island. Its exterior is demonstrative of impressive neoclassical architecture while its interior harbors the antiquities collection. It was placed under the UNESCO World Heritage Sites umbrella and has adorned the protected title since 1999, along with the other spectacular bastions of artistic antiquity on Museum Island.

An interesting idea fell upon the bourgeoise in the 19 century, an idea that seems common now, but quite forward thinking for the time: as their relationship between art and the observer evolved, so did their concept of who should be able to bear witness to its majesty. As a way of championing for art to be displayed in the public sphere and encouraging a continuing cultural education for all citizens, King Wilhelm III of Prussia commissioned this idea to architect Karl Friedrich Schinkel. Schninkel would design the neoclassical structure under the influence of his King who had a penchant for all things antiquity. 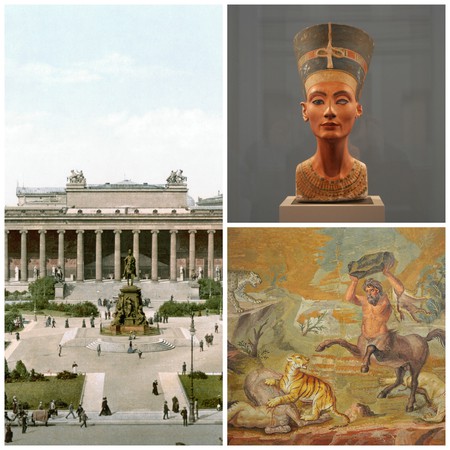 Though he started designing the museum in 1823, it wasn’t until 1830 that the Königliches Museum, what it was known as at the time, was completed. Schninkel contemplated his design carefully in relationship to the surrounding infrastructures; the Berliner Dom to the East, the Stadtschloss in the South, the Zeughaus in the West and finally the Altes Museum in the North. Each piece representing a different aspect of Germany – divinity, power, military, and arts and science.

The Altes museum was only meant to house high brow art and was given its adjusted nomenclature in 1845. Its name change coincided with a shift in curation. Originally intended to only exhibit opulent and intellectual art, it came to house a collection of Classical Antiquities or Antikensammlung in 1904, which is the only type of art it displays to date. The classic Greek, Roman, Etruscan art ranges in size and style comes in ample supply at the Altes Museum, drawing in the crowds for its impressive collection to this day.
📅 Tue-Sun 10-6 & open until 8 on Thurs