Did Walter Benjamin Live Out His Own Philosophy Through Exile? 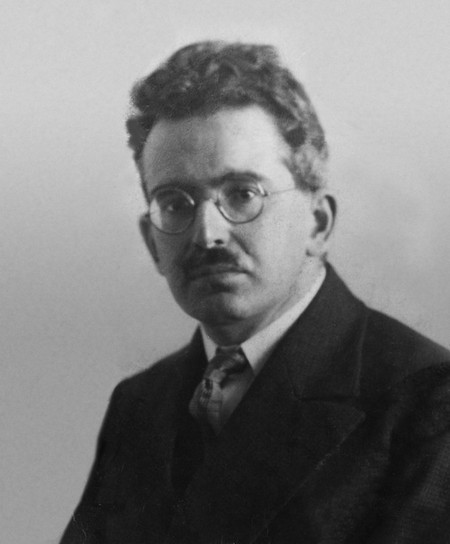 Walter Benjamin was one of the most important philosophers of his time when he fled the Nazi’s persecution of the Jewish people and later committed suicide during his emigration. Did that act solidify his own philosophy?

Walter Benjamin was born in 1892 to a wealthy Jewish family in Berlin. The family resided in Charlottenburg, where Benjamin later attended school. An esoteric character, he wrote on many different aspects of life and academia: from translating all of Baudelaire’s works and writing a critique on violence, to writing the Theses on the Philosophy of History months before his death. Benjamin was an ambiguous character in his geographical migrations and the topics which he wrote on, but especially relevant today are his essays on the impact of photography, his comments on our interpretation of history, and the exile he experienced in the last years of his life.

After growing up in Berlin, Benjamin moved around Europe studying philosophy, traveling between Freiburg, Berlin and later Switzerland. Despite studying philology and philosophy, he seemingly made limited impact on the philosophical world. Stanley Cavell was an American philosopher invited to a conference at Yale University in 1999, to speak on Benjamin’s contribution to Cavell’s field of work. Cavell’s comment was ‘an honest answer to the question of Benjamin’s actual contribution to [my] field is that it is roughly nil.’ Whilst an exile from his country, Benjamin was an exile from the profession in which he studied too. He wrote not just on philosophy but about film, photography and literature, many of these essays were sent to newspapers and general publishers, as opposed to academic journals or going towards specific studies.

On Art & The Modern World

Benjamin’s interest in Baudelaire, Kafka, Proust and Goethe led him to write essays of literary criticism, though arguably his most famous contributions to cultural criticism were in his studies of the modern world. He looked at the influence of photography and film, and the impact that their introduction has on people’s perception of the world. In 1936, he wrote The Work of Art in the Age of Mechanical Reproduction, in which he described ‘the manner in which human sense perception is organised, the medium in which it is accomplished, is determined not only by nature but by historical circumstances as well.’ In this he was arguing that our connection and understanding of modern art must progress as the techniques and contexts develop too.

Benjamin spoke of the ‘aura’ of works, saying that there was something beyond the technical expertise in a work, an originality and authenticity that is lost with the replication and reproduction, seen in photography and film. The original had a quality that existed in a certain time and space, that he argued could not be replicated. This in turn influenced John Berger’s book Ways of Seeing in which Benjamin’s idea was developed into the comment that ‘images of art have become ephemeral, ubiquitous, insubstantial, available, valueless, free.’ Benjamin’s idea of something being lost in the reproduction of images is clear today, with the saturation of information we receive over the internet; the abundance of imagery removes an aspect of the connection, for instance we are unaffected by photographs of violence or tragedy for we have seen so many similar. 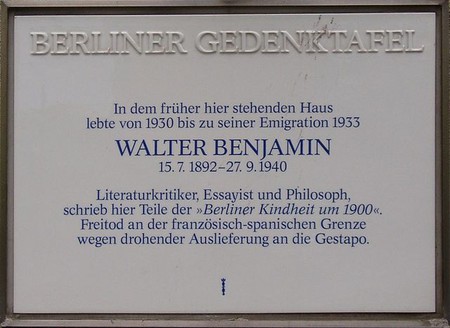 The memorial plaque to Benjamin in Wilmersdorf, Berlin Ⓒ Wikinaut/WikiCommons

The memorial plaque to Benjamin in Wilmersdorf, Berlin
Ⓒ Wikinaut/WikiCommons

A Life in Exile

When Benjamin wrote The Work of Art in the Age of Mechanical Reproduction, Hitler was already Chancellor in Germany. Benjamin had moved often at the beginning of his life to study, but from around 1932 he lived mostly in Ibiza, Marseilles, Denmark and Paris in a life of exile from Germany. In 1938, he wrote Berlin Childhood Around 1900, a reflection of his experiences growing up in Berlin. In the introduction, it reads ‘In 1932, when I was abroad, it began to be clear to me that I would soon have to bid a long, perhaps lasting farewell to the city of my birth.’

He never found the lecturing or professor
positions many of his associates did, and spent much of his life in extreme poverty. He was aided by companions such as Max Horkheimer and Theodor Adorno, but was often opposed to their dialectical interpretation of Marxism which they demanded he write on. Although Benjamin was renowned as a Marxist, that too is hard to trace in his works. Hannah Arendt, a friend and philosopher described ‘Benjamin probably was the most peculiar Marxist ever produced by this movement, which God knows has had its full share of oddities.’ The Marxist influence was filtered through those around him, particularly the playwright, Berthold Brecht. In his last major work, Benjamin appears to point to the flaws in that dialectical Marxism.

On the Philosophy of History

That last major work was Theses on the Philosophy of History, completed in 1940, months before his death and mid-way through the World War II. It was arguably his most controversial and most famous work. Although a comment on history, it also parallels with his earlier work, The Work of Art in the Age of Mechanical Reproduction and the way in which we perceive the world. He wrote, ‘for every image of the past that is not recognized by the present as one of its own concerns threatens to disappear irretrievably.’ The alienation from his home country and city, and is clear in his essay. The idea of our interpretation and understanding of the past being insufficient. Benjamin wrote in The Work of Art, that photography ‘guides us to a particular side of a story and leaves other parts out. It dulls our perception towards the work of art and introduces distraction as a mode of reception’. This can be paralleled with his later analysis of our perception and understanding of history in his saying ‘there is no document of civilization which is not at the same time a document of barbarism. And just as such a document is not free of barbarism, barbarism taints also the manner in which it was transmitted from one owner to another’. In The Work of Art he writes on the instantly skewed nature of photography in our ability to pick a subject, he says something similar about our perception of history in that it is always written by the victor. You see success, but just out of the picture is tragedy.

Benjamin’s commentary and analysis of the modern world was extremely perceptive, although not completely specific, and perhaps not taken entirely seriously given the ambiguity in his focus – seemingly trying to explore a great deal all at once. In A Field Guide to Getting Lost, Rebecca Solnit wrote of Benjamin’s interest in ‘the art of straying.’ Solnit writes: ‘To lose yourself: a voluptuous surrender, lost in your arms, lost to the world, utterly immersed in what is present so that its surroundings fade away. In Benjamin’s terms, to be lost is to be fully present, and to be fully present is to be capable of being in uncertainty and mystery. And one does not get lost but loses oneself, with the implication that it is a conscious choice, a chosen surrender, a psychic state achievable through geography. That thing the nature of which is totally unknown to you is usually what you need to find, and finding it is a matter of getting lost.’ Benjamin was a character who, upon taking a look over his body of work, was seemingly a little lost. He moved from radio shows for children to theses on Marxist dialectics; lost, with the positive connotations he incites, as being immersed in interests, passions or concerns.

Ultimately the immersion in the present that Solnit mentions, ‘so that the present fades away’ had a very different meaning at the end of Benjamin’s life. Any flaneurism, or life of privilege, was drawn back to reveal an extremely human struggle. After life became impossible in Germany, Benjamin and some friends fled to Southern France as part of a refugee group, in an attempt to pass over the border to Spain, through Portugal and on to New York. Benjamin acquired an American visa, and although reluctant to leave Germany, fled for the promise of a life in America. Arriving at the border the group found it closed, and they then faced the threat of then being returned to the French who would have handed them over to the Nazis. Benjamin took his own life in order to escape that fate. The exile from his country, which he unwillingly left, is reflected in the plight of many millions today. Benjamin may not have left the lasting impact as a philosopher that many of his associates did, but his comments on the modern world feel more relevant than ever. The very borders which Benjamin and his group were stopped at, were opened the next day. His comments on the pointless barbarism that we do not fully recognize or engage with, are made all the more potent by his death.
By Harriet Blackmore