“Wherever they burn books, in the end, they will also burn human beings.” The great German Romantic, Berlin-based poet Heinrich Heine’s infamous quote is now immortalized on a plaque adorning a memorial at Bebelplatz, the site of one of the Nazis’ most infamous book burning ceremonies. And how fitting! Berlin was once the heart of German Romanticism, and the early twentieth-century center of a vibrant arts and culture life, later subdued by the rise of fascism (a period brilliantly captured by Christopher Isherwood’s Berlin Stories). The city was then divided for nearly half a century, forcing writers both east and west to sneak each other’s works across the Wall, only to have today resurfaced as the uncontested center of European artistic daring. Whatever one thinks, Berlin is never boring. We take a look at the city’s contemporary literary scene. 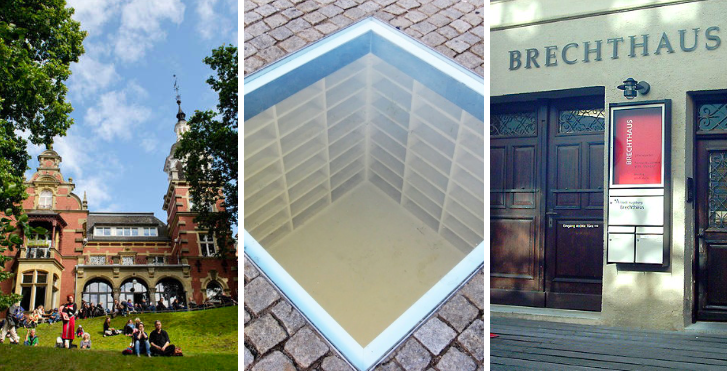 The Bertolt Brecht Haus
Brecht’s home from 1953 until his death in 1956 now houses the official museum to the playwright. It contains the remains of Brecht’s personal library, consisting of 4,000 books and several personal belongings. Today it is possible to take guided tours of the apartment, where several rooms have been maintained in their original conditions.

Bebelplatz
Bebelplatz was the site of the Nazi’s largest book burning on the infamous night of May 10, 1933. Almost 20,000 texts were set to light, including religious texts and novels. Today, a window exists in the ground below where people can peer down to a room filled with empty bookshelves that would house all the lost books.

Savoy Hotel and the Walter Benjamin House
A popular postwar spot for artists, writers, and musicians, the Savoy Hotel plays up its ties to its bohemian past. Rooms are named after famous works, including Henry Miller’s Tropic of Cancer. A short train ride away and you’ll find the former home of Walter Benjamin which is dedicated with a plaque detailing his life and importance.

Literaturhaus and the Literary Colloquium
Two of Berlin’s great literary institutions can be found in the southwest of the city. The Literaturhaus has cozier vibe, hosting several lectures and outfitted with a bucolic restaurant to help digest them. Situated on the Wannsee River in a lovely old red brick building, the Literary Colloquium Berlin is the city’s larger literary center and museum.

The Christopher Isherwood Walking Tour
The Isherwood Walking Tour is a one-hour exploration of the old stomping grounds of Isherwood, primarily located throughout the Nollendorfplatz area. One of the highlights of the tour is the apartment Isherwood shared with Jean Ross, the cabaret singer who inspired the famous character of Sally Bowles. 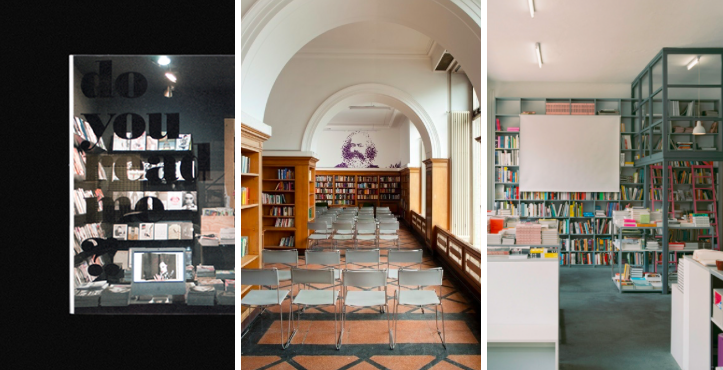 Ocelot
Some bookstores really do deserve a design award, and Ocelot really ought to be nominated for one. Billing itself as “not just another bookstore” the Ocelot experience is one of slow patient wandering. An extensive bilingual selections, a beautiful interior, and a helpful staff ensure that you’ll stay for awhile.

Walther König
If you’re looking for a store that only offers highbrow selections of literary and art titles, Walther König is the place. As the name suggests, the store takes its name from its owner, who has made a name for himself not only as a storied bookseller, but also as a independent publisher.

Karl Marx
Walking the line between bookstore and institution, Karl Marx Buchhandlung also functions as a rentable literary event space. With Marx himself looming over the floor, you can host your own lectures, discussions, or book launches, or simply peruse the minimalist-designed shelves.

Do You Read Me!?
Not a bookstore, but an evolved idea of the newsstand, Do You Read Me! shelves art and culture magazines from over 20 countries. Any niche creative periodical can be found here, from magazines that bring together literature and sports to journals that bring fashion to farming. 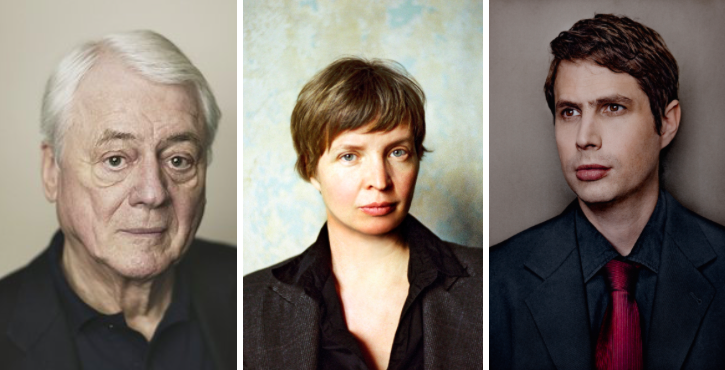 Alexander Kluge
Kluge comes from the line of New German Cinema directors and has become one of the most important living filmmakers in the country. That aside, he’s also lauded as one of Germany’s finest writers, having developed a humorous and engrossing documentary style of social criticism, an influence that harkens back to Kluge’s youth as a student under Theodore Adorno and as a set assistant to Fritz Lang. Kluge’s essay collections in English translation include The Devil’s Blindspot, Cinema Stories, and December.

Jenny Erpenbeck
An East German writer by birth, Erpenbeck became one of the first major literary talents to emerge after the dissolution of the GDR. Initially a playwright, Erpenbeck began writing prose, snagging the Ingeborg Bachmann prize for her short story collection The Old Child. Later novels included Visitation, which followed three generations of German writers, and The End of Days, which won the International Foreign Fiction Prize in 2015. A touching introduction to her work, a memory of the Berlin Wall, can be read at The Paris Review.

Judith Hermann
Hermann began her literary career as a journalist and was a German reporter living in New York when she started writing short stories. As the story goes, she realized she enjoyed fiction more than journalism and quit her job and moved back to Berlin to continue developing her award-winning first collection Summerhouse, Later. Hermann’s tone conjures a more stoic, vision of Berlin, lived out by almost Beckettian-like characters. A collection of linked stories, Alice, appeared in 2009.

Daniel Kehlmann
Kehlmann has developed a reputation as one of Germany’s most lauded stylists, and his writing has hooked some big name English-language fans such as Zadie Smith, Jonathan Franzen, Ian McEwan, and Joshua Cohen. It’s not hard to see why—Kehlmann’s fiction encapsulates multitudes, from the epic vision of his international award-winning Measuring the World, about the naturalist Alexander Von Humboldt to his latest, simply F, a novel that features, among other characters, a rubik’s cube champion, and that has drawn comparisons to Pynchon and McCarthy.

Herta Müller
Though Müller was born and raised in Romania, her move to West Berlin was fraught enough to have become a reoccurring theme of her writing. Müller published her first book, Nadirs, as a samizdat. In 1986, she published The Passport largely based on her unsuccessful attempt to relocate to West Berlin. She and her husband’s application was granted a year after it was released. Novels such as the Hunger Angel examine the cruelty of totalitarian powers. She won the Nobel Prize for literature in 2009. 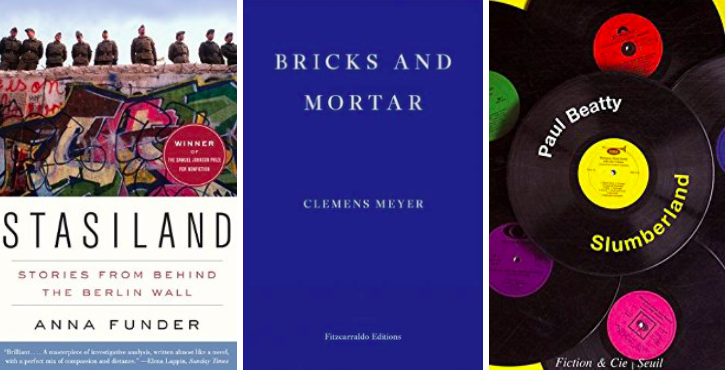 The Baader-Meinhof Complex
The phrase Baader-Meinhof has come into common usage to describe a phenomena where you see something once and suddenly think it’s everywhere. But the phrase itself has charged origins—Mssrs. Baader and Meinhof were two leaders of a far-left West German extremist group that engaged in burglaries, kidnappings, and murders. Their complicated mission, and the events leading to its rise and demise, were documented in Stephan Aust’s bestselling book The Baader-Meinhof Complex, which was later adapted into a sensationalistic film.

Memoirs of a Polar Bear
It’s not often that a city zoo becomes the backdrop of a novel, but Yoko Tawada’s Memoirs of a Polar Bear is inspired by a uniquely Berlin story. In 2008, a polar bear named Knut was born at the city’s zoo, and though immediately rejected by his mother, became one of the most famous animals on the planet. In an almost surreal narrative, Tawada plots Knuts ancestry back to his memoir-writing polar bear grandmother, then back to his mother and her difficult relationship with the zoo, and finally to Knut himself, who lives a life of solitude and contemplation.

Stasiland
After Nazi Germany crumbled, the country was partitioned into Western and Eastern divisions, encapsulated most powerfully by the literal wall running through the middle of Berlin. The lives of those in Soviet-allied Eastern division, the German Democratic Republic, are chronicled in journalist Anna Funder’s Stasiland, which takes its name from the state’s brutal secret police force. Here she tells the lives of both people who repressed human rights as well as the stories of those who valiantly fought to reclaim them.

Bricks and Mortar
The dark criminal underbelly that operates to undermine Germany’s neo-liberal policies is the pulled into focus in Clemens Meyer’s Bricks and Mortar. The lives of many of denizens of this underworld are told here, but it is Arnold Kraushaar, a hooligan turned prostitution kingpin, that pushes the narrative of the book. His power struggle between different crime syndicates and gangs, drug deals and murders, all lead to a large butterfly effect that shows just how, even within this most “Western” of Western countries, organized crime can still play a role in shaping the country.

Slumberland
Though written by an American, Paul Beatty’s Slumberland captures that celebrated Berlin techno subculture. As a black American DJ, Ferguson, aka DJ Darky, has the gift of what he terms a “phonographic memory” and is, in a sense, a human Shazam. But Ferguson, being a black man in the waning days of divided Berlin, is somewhat of a novelty. At the Slumberland bar where Ferguson works, his clientele are white women who come to pick up black men, with their white boyfriends tagging along to watch. The humor’s deep cut is aided Beatty’s perspicacity.

* This guide pulls from preexisting listicles curated by Helen Olley, Evangelos Tsirmpas, and Lily Cichanowicz for Culture Trip. As these previous lists may include items not shown here, links to these pieces have been hyperlinked in section titles.