The Coolest Neighbourhoods in Dresden 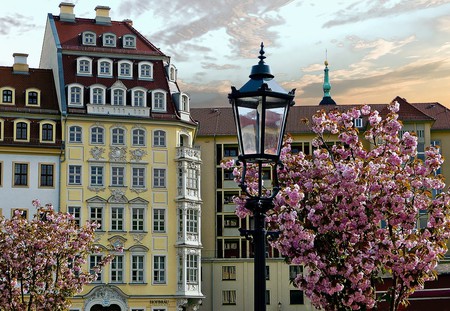 Dresden offers the perfect mix of grand Baroque architecture, history and trendy bars and cafés. You won’t be able to miss the city’s centrally located Altstadt and Neustadt districts since they hold most of the touristy sights and postcard motifs, but if you venture a little further you might be able to find some lesser-known gems. Check out our list of Dresden’s coolest neighbourhoods for some inspiration.

Dresden’s hippest area is the quarter of students, young professionals and artists. A multicultural melting pot, it’s modern, lively and offbeat. More than 100 bars, pubs, clubs and music venues are wedged between Albertplatz and Stauffenbergallee. Needless to say, the streets of Äußere Neustadt quarter are buzzing on a weekend night when students and young professionals embrace the nightlife. During the day they sip on chai lattes and cold brew coffee, eat vegan Buddha Bowls or Spanish tapas, shop at trendy fashion boutiques and frequent the small art galleries. 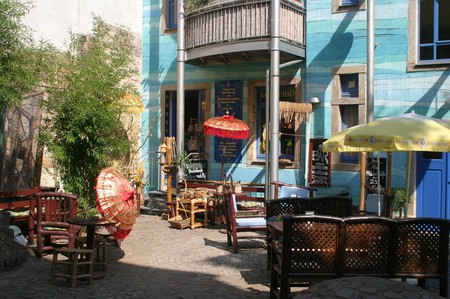 The Innere Neustadt district borders the Elbe riverside on one end and Äußere Neustadt on the other. The cityscape is composed of beautiful residential areas, colourful baroque townhouses and the pedestrianised Hauptstrasse – Neustadt’s strolling promenade with restaurants, wine bars, shops and theatres. In July, the Weinsommer event celebrates the best wines from Rhineland-Palatinate, and during the Advent season vendors set up camp for the Augustus Christmas market. One of the quarter’s highlights are the stunning views of the Elbe and Dresden’s old town skyline on the other side.

The city’s old town is best described at ostentatious and glamorous. Main sights including the Church of Our Lady, Zwinger, the Royal Palace and Semperoper are located here. The area has received a facelift in recent years, with international restaurants, designer boutiques and cafés moving in and attracting a trendy crowd of high-earners. They enjoy the clash of the grand historic architecture along with quirky and quaint cafés on one side and newbuilds and gourmet fusion restaurants on the other. If you’re visiting, you’ll be spending a lot of your time strolling along the cobblestoned streets to see the highlights. 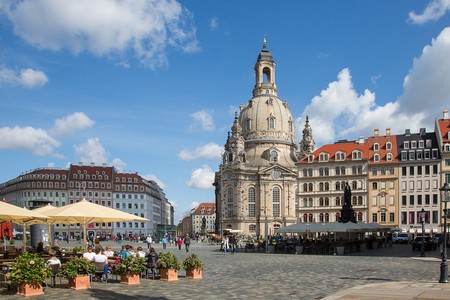 East of Dresden’s old town, the quarters of Striesen and Blasewitz charm with a picturesque riverside promenade, an architectural mix of Gründerzeit villas and 1970s apartment blocks. There are also tranquil beer gardens and fabulous restaurants – most notably the traditional Schillergarten, where Friedrich Schiller himself dined in his lifetime. The area is not only a favourite of locals but also offers some touristy sights, including the Church of Reconciliation, a 100-year-old observatory and one of Dresden’s most prominent landmarks, the Loschwitz Bridge, also known as Blaues Wunder.

A walk across Dresden’s most beautiful bridge takes you to Loschwitz, a district known for its beautiful villas, the world’s oldest overhead railway and three palaces overlooking the Elbe – the Lingner, Albrechtsberg and Eckberg Palace. The former two were commissioned by Prince Albert of Prussia and served as his residencies in the mid 19th century. Tours of the two stately homes are available. Eckberg Palace, on the other hand, has been transformed into a luxury hotel and is only open to its guest. If you want to have a peek inside, book a table for dinner! 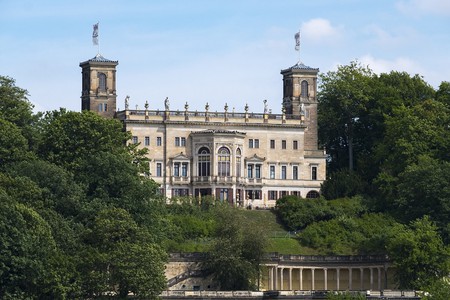 Hellerau or Dresden’s Garden City is a romantic and leafy district north of the city centre. Its roots date back to 1909 when, inspired by the first elaborate gardens in England, a local furniture maker started the initiative to create Germany’s first garden city. Before the First World War, the area had developed into one of the city’s cultural hubs. The old festival hall was renovated in 2006 and stages theatre performances, plays and modern art exhibitions.

The quarter south of the old town is populated by students and young families, mainly because both the Technical University and the University of Applied Sciences have campuses here. Takeaways, bars and cafés line the streets of 1960s apartments and Gründerzeit townhouses. It’s not the most exciting area to visit, especially if you only have a few days in the city, but if you have a bit of extra time, the Russian Orthodox St. Simeon of the Wonderful Mountain church and the memorial site Münchner Platz are worth a visit. 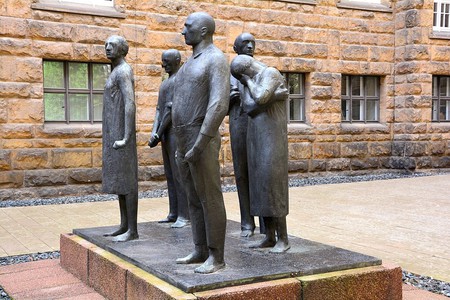