The Best Cheap Hotels and Hostels to Book in Leipzig, Germany

Metropolises like Berlin and Munich draw hordes of visitors – but that’s no reason to skip Germany’s smaller gems. Leipzig, about two hours by train or bus from Berlin, is a fantastic choice: a formidable mix of old and new art and culture. The genius Baroque composer – and former resident – J S Bach put it on the map in the 1700s; this century, it’s evolved as a hub for up-and-coming artists, many working out of disused industrial buildings dotted around the city. Here are the best places to stay if you’re visiting Leipzig on the cheap. 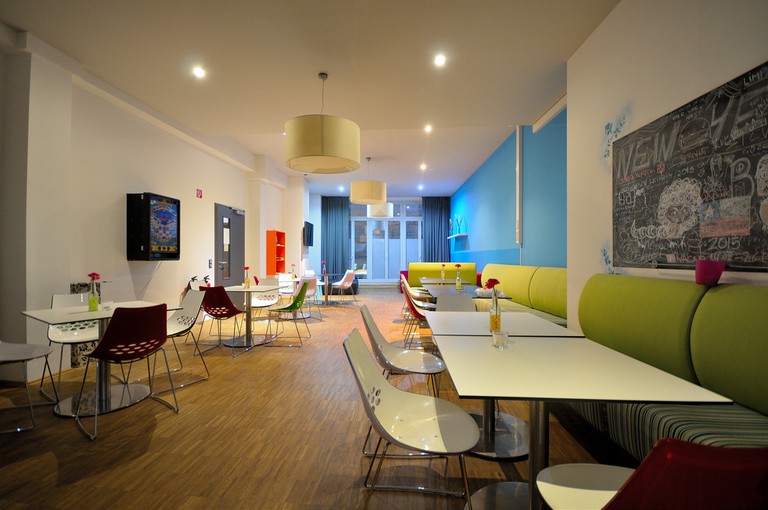 Courtesy of Eden Hostel und Garten / Expedia.com
In the charming Lindenau district, Eden is a friendly hostel of eclectic spaces designed by local artists. Private rooms with up to four beds and dormitories are available – most of the former have shared bathrooms. It’s an excellent springboard for Leipzig’s contemporary creative scenes: the neighbourhood is a little beyond the historic centre, but handy for the casual cafes and bars of Karl-Heine Straße, as well as the art galleries and studios of Plagwitz. All in all: a great option if you want to dodge the tourist crowds. 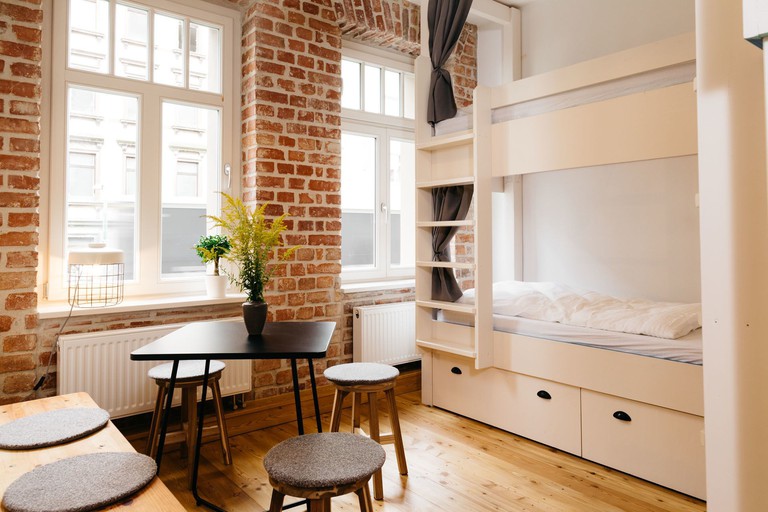 Courtesy of Multitude Hostel / Expedia.com
Also in Lindenau, if a little closer to central Leipzig, is this chic hostel occupying a historic building. Clearly, a lot of thought has been put into its design: each bunk bed in Multitude’s dormitories has its own blackout curtain and reading light. The rooms are striking, with robust wooden bunks and plenty of natural light. Private rooms for up to four are also available. With activities from pub quizzes to art exhibitions, it’s a social type of spot, too, without being a rowdy party hostel. 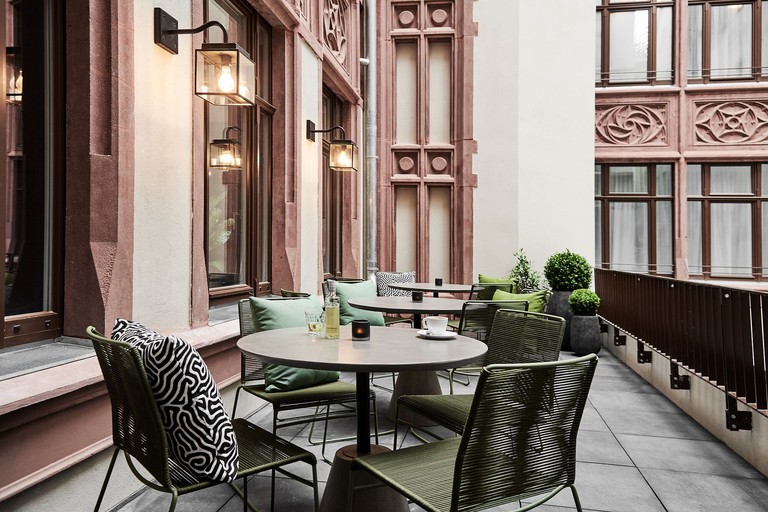 Courtesy of Groners Leipzig / Expedia.com
Boutique hostel Groners caters to all sorts, from families to digital nomads. The private rooms (including sizeable ones for families) have their own private bathrooms, and the dorms sleep between four and eight in perfectly spacious rooms. There’s a large, modern kitchen and co-working area, as well as a small rooftop terrace. With a location right in the heart of Leipzig’s historic centre (Zentrum), you’re a short walk from most of the attractions. Handily, the main train station is just five minutes away on foot. 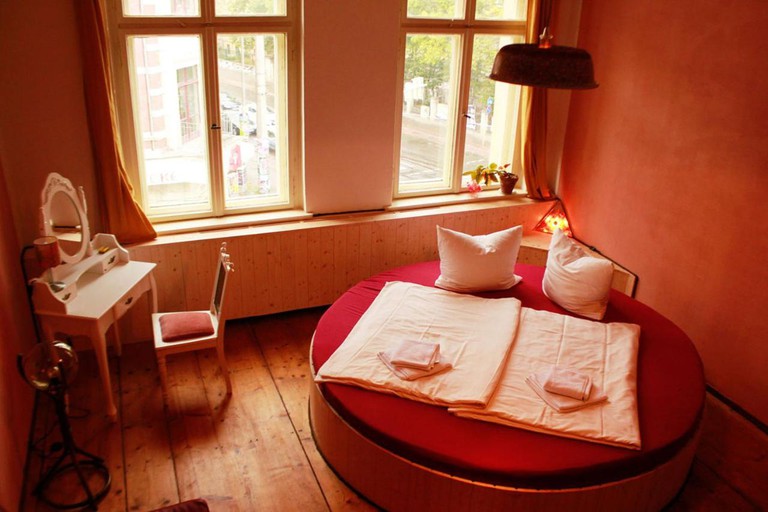 Courtesy of Spirit Lodge Leipzig / Booking.com
Spirit Lodge is a small hostel with a distinctly hippie vibe. It’s wedged on the edge of the youthful Lindenau and Platwitz neighbourhoods, a short tram ride west of central Leipzig. Run by a friendly German couple, the hostel (in a converted residential building) is one of the homeliest options in town. Its rooms are generously done out in natural, woodsy textures. There are several private rooms on offer, as well as five-bed dorms. For your night in after the bar crawl the evening before, the communal spaces have games, books and a large kitchen. 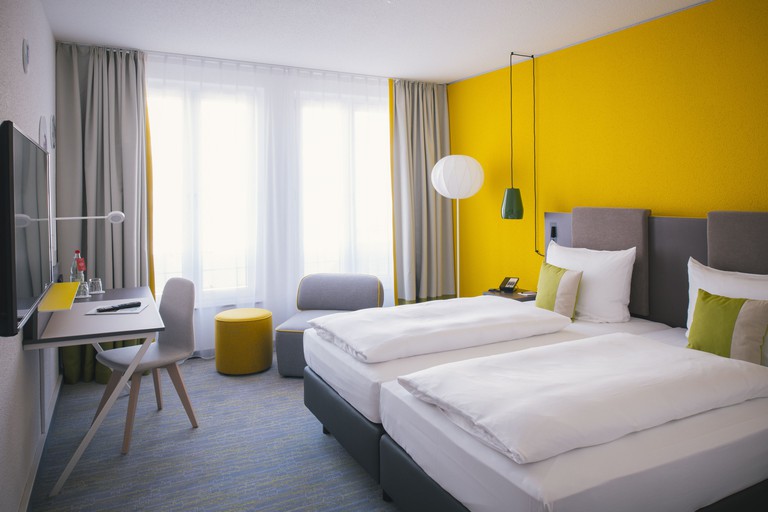 Courtesy of Vienna House Easy Leipzig / Expedia.com
For such an affordable hotel, Vienna House has a lot going for it: it’s on the edge of Leipzig’s Zentrum area, with its museums and coffeehouses. Its amenities are great, too: there’s a gym, conference rooms, on-site parking and a bar and cafe, as well as welcoming communal spaces. The rooms feature bold, bright colours, and there are also suites and family-suitable spaces for larger groups or those who just need a little more room. 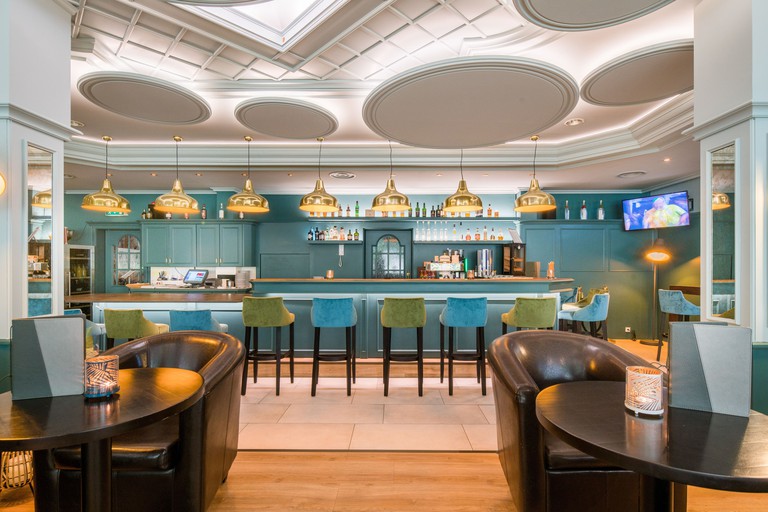 Courtesy of Parkhotel Diani Leipzig / Expedia.com
Parkhotel Diani inhabits a heritage villa a little outside the city, in a tranquil location perfect for a little rest and relaxation. Its cosy, warmly decorated rooms run the gamut from standard doubles up to family-sized suites, most with views out over the green and pleasant surrounds. The hotel has its own Finnish sauna, fitness room and in-house restaurant Senses, which serves market-fresh cuisine with a focus on local produce. Staying here, be aware that you’re about 5km (3mi) southeast of central Leipzig. But getting into the city involves a short and simple tram ride. Alternatively, point yourself the other way – there are many picture-perfect lakes and forests to the south of Leipzig. 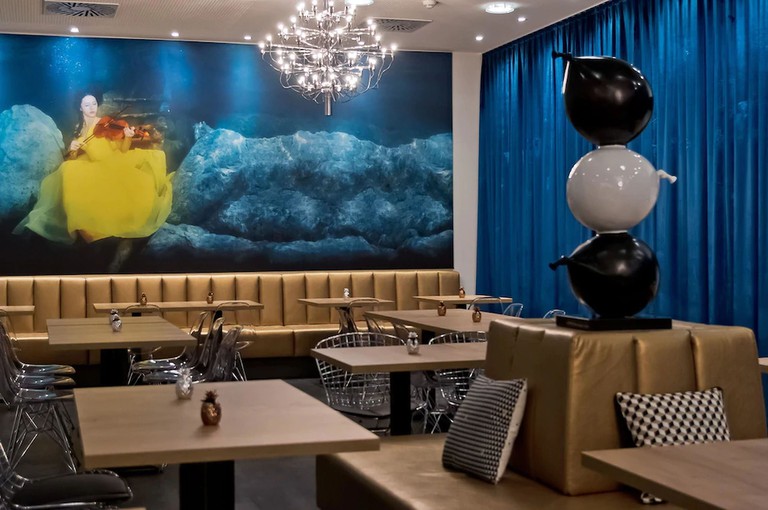 Courtesy of Arthotel ANA Symphonie Leipzig / Expedia.com
Welcome to a friendly, modern hotel in the thick of of Leipzig’s Zentrum, lined with historic architecture and shops. Arthotel ANA Symphonie might just be the cheapest non-hostel accommodation in town and even comes with a price-match guarantee. The look centres on simple, contemporary designs with a few pops of colour, and the choice is largely doubles (with a choice between one double or two single beds). Splash out on the more expensive superior rooms, and you’ll get a balcony overlooking the quaint streets. 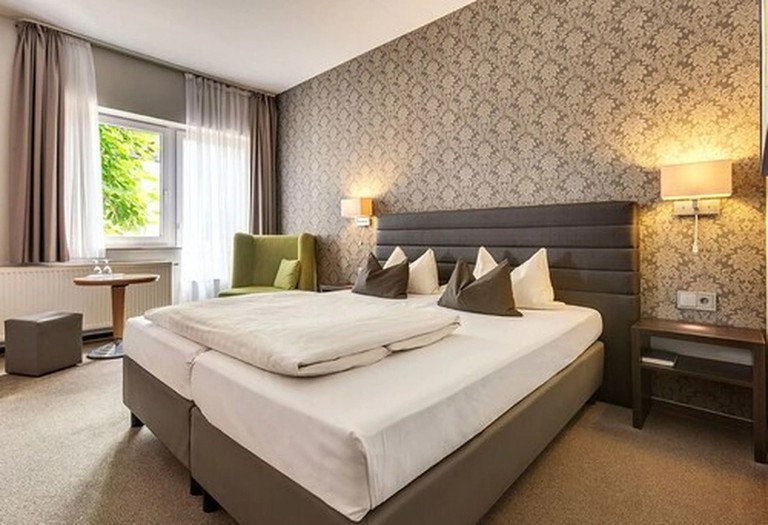 Courtesy of Hotel Hiemann / Expedia.com
This is a relaxed, family-run haunt to the north of Leipzig, with a range of sharply styled rooms from singles to a duplex sleeping four. Even the price is nice. The sun terrace and light-dappled beer garden are great spots to relax in after a day in the city, and the in-house restaurant is a triumph of traditional dishes made with fresh local ingredients. Wiederitzsch is a relatively suburban district, but three stops on the S-Bahn and you’re in the city centre. The hotel is also walking distance from the convention centre that hosts Leipzig’s huge annual trade fair, and many other events throughout the year.

Just two hours from Leipzig is Berlin. Extend your German holiday by booking yourself one of the best apartments in the German capital, or a room in one of the places to stay for those that want to live like a local. Take these innovative tours to get to know the city, then finish off in one of the best restaurants in Berlin.

This is an updated rewrite of an article originally by Marion Kutter.