EUROPE
/
GERMANY
/
MUNICH
/
Things to Do

The Best Things to Do in Munich, Germany 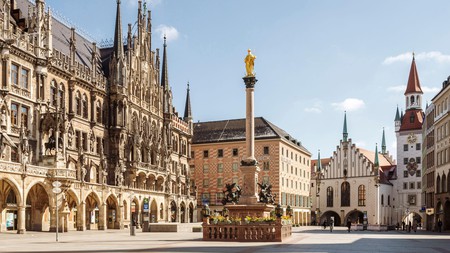 Best known for Oktoberfest, Munich is a delightful place to visit year-round, with a wide array of activities for travellers of different stripes – from sports fanatics to science geeks.

Referred to by residents as a very large village, Munich has plenty of things to do but is still a manageable size; getting around is simple, with most places either walkable or accessible by the excellent public transport system. There’s an abundance of green space, cafes, restaurants, bars and shops. In Munich, arts lovers will find top-notch museums; history buffs can head to Nymphenburg Palace, the main royal residence and a museum that traces the rise of the Nazis; and sports fans can see one of Europe’s best football teams play at their home stadium. And in-between, there are lots of places to enjoy a drink and relax.

Wander through history at Marienplatz and Viktualienmarkt

The best place to start exploring Munich is the old-style city centre. Marienplatz is a common meeting point for locals, and is also the area where you will find both the new and the old town halls, as well as many modern shops. The gothic building dominating the plaza is the new town hall, which was built in the late 1800s; you can find the original town hall, which is nearly 500 years old, right outside the plaza. Adjacent to that is Viktualienmarkt, a pretty square where people sell food, drinks and souvenirs; it’s open year round, but is especially magical during the Christmas season. Beware: prices at Viktualienmarkt are higher than average, and most locals won’t buy much more than a beer or a sausage there.

Pro tip: aim to arrive at Marienplatz at 11 am or at noon, when you’ll be able to catch the daily clock performance (the Glockenspiel), which involves 43 bells and 32 life-size figures, on the facade of the new town hall.

Across the plaza from Munich’s new town hall is the oldest parish church in Munich, St Peter’s – there’s been a site of worship here since the 12th century. The viewing platform (300 steps above ground level) grants awe-inspiring views; from here, you can see the whole city and even as far as the Alps on a clear day. Afterwards, head to the nearby Cafe Frischhut as a reward for climbing all those stairs to try Munich’s best sweet snack – schmalznudeln (lard noodles). This delightful deep-fried doughnut is far more appetising than its name suggests. 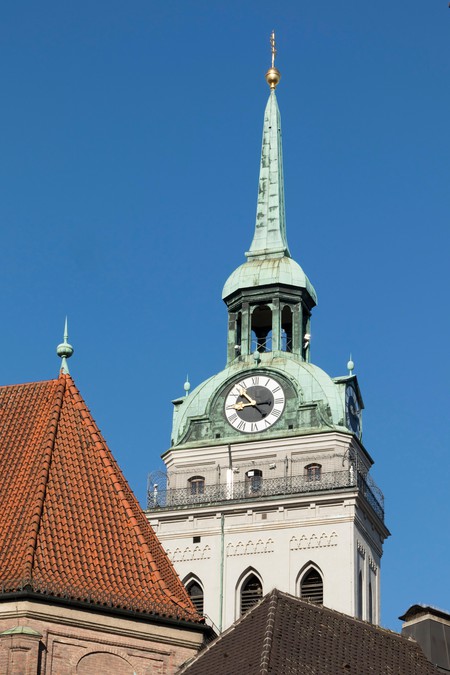 Experience the opulence of the Nymphenburg Palace

Set on the outer western edge of the city, Nymphenburg Palace was built in the second half of the 17th century and functioned as the summer residence of Bavaria’s rulers. The palace expanded over the following centuries, with much of the later architecture done in a French style. Some of the highlights at Nymphenburg are the Botanical Garden, which features 52 acres of gardens and greenhouses; the baroque-style palace park; and the Amalienburg, or hunting lodge, on the park’s grounds. Dusty pink on the outside, and utterly decadent on the inside, the Amalienburg includes a circular Hall of Mirrors that reflects the natural landscape outside.

Visit the former seat of power in Bavaria

In the centre of Munich, near Marienplatz, you’ll find the main residence of the Bavarian rulers who governed the state until 1918. Decorated in a mix of Renaissance, Baroque, rococo, neoclassical and historicist styles, the residence has been open as a museum to the public since 1920. Here, you’ll be able to see the bedrooms, state room, furnishings and artworks that Bavarian royals accumulated during their reigns.

Cheer on one of Europe’s top football teams

FC Bayern has a very dedicated fan base and the large, shiny Allianz Arena is its home turf. Going to one of the team’s matches is as much of a cultural experience as a sporting one. Look out for the bratwurst signs as you walk in, fans clad in lederhosen or dirndls (the traditional clothing that many people wear to Oktoberfest), and for the hardcore-fan section on the ground once you’re at your seat; with their drums, flags and singing, they will be hard to miss.

Pro tip: you can’t bring backpacks or large bags into the stadium, and most games are very crowded, so leaving the stadium can take up to an hour. Getting tickets can be a challenge, so buy them well in advance of your trip, or find someone who has an FC Bayern membership (they have access to more tickets).

If you’re looking for a more laid-back football experience, consider Grünwalder Stadium, where you can catch the second teams of FC Bayern’s and 1860 Munich, the beloved underdog team that has played at Grünwalder since 1911, when the stadium was built. 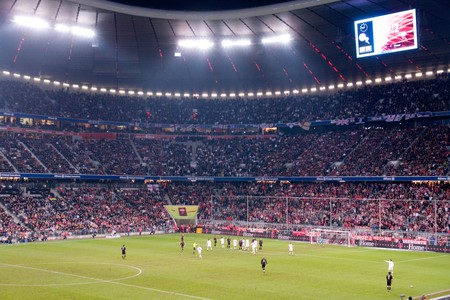 Decompress at the pools

Sauna and pool culture is strong in Germany, and Munich is no exception. The city’s pools are open to the public: they’re clean, spacious and affordable. Some include sauna sections where you can relax in a cocoon of heat after a long day of activities, or get your day going with an energising schvitzing (sweating) session. Dantebad, in the north, offers water treatments in its outdoor pool; Müllersches Volksbad, near the centre of the city, is a beautiful art nouveau-style complex with a pool, saunas, a Roman bath and excellent massage services – book ahead to secure your spot. Next to the complex is a beer garden, where you can head for a drink and meal after a few hours of floating.

Pro tip: in Germany, people are fully nude inside the saunas, so if that’s something you’re not comfortable with, stick to the pool.

The Isar, which originates in the Alps, runs right through Munich, winding its way between neighbourhoods and alongside the Englischer Garten in the heart of the city. In the summer the city spills out onto the Isar’s shores, where people drink beers, picnic and take dips in the very cold water. Swim only where you see lots of others swimming; the Isar has strong currents and can easily sweep up an inexperienced swimmer.

The Eisbach, which means “ice creek”, is an arm of the Isar and also runs through the Englischer Garten. At the southern entrance of the park on the Eisbach, you’ll find the surfers, who come out in wetsuits during all seasons to take on the rapids: sometimes successfully and sometimes less so. Further north in the Englischer Garten, where the water is significantly calmer, you can swim throughout the warmer months.

Steps away from the Eisbach is the Haus der Kunst – literally House of Art – a contemporary arts museum that was built in the 1930s by Hitler; he intended it to be the place where he would showcase propaganda art. Today, the museum features exhibitions by well-known international and German artists, with the lack of permanent collection making way for more exhibit space. As well as world-class art, you’ll find one of the city’s best cocktail bars, Goldene Bar, inside the museum. Antique maps decorate the walls – make your way into the smaller absinthe bar off the main one, or onto the large covered patio where you can sip your drink on warm days. 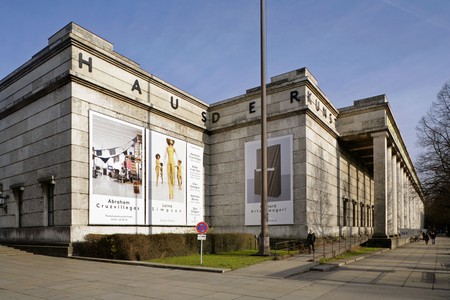 Opened in 2015 at the site that once served as the headquarters for the Nazi Party, the Documentation Centre for the History of National Socialism traces the chronological rise of the Nazis over three floors. Part of the museum’s intention is to explore the role Munich and Bavaria played in the advancement of national socialism after World War I. The permanent exhibitions offer an assortment of primary sources, including texts, statistics, audio recordings and images, and feel in some ways like a history book come to life. Whether you’re an amateur historian or a World War II buff, the museum is a worthwhile spot to visit in the city.

Eat and drink for a good cause at Bellevue di Monaco

A cultural and community centre, Bellevue di Monaco is run as a social cooperative by locals and refugees; every member has an equal share and vote in the way the organisation operates. Stop by Bellevue di Monaco to taste one of the dishes on their menu, which changes daily and includes options such as moussaka, tagine and mezze plates. As well as providing housing for young refugees who’ve aged out of the youth care system, the centre, which opened in 2018, offers recurring events to the public including poetry and rap workshops, open art studios, boxing classes, concerts, language courses, migration counselling and film screenings. Check the centre’s online calendar to see what’s coming up.

Ride the parabolic slide at The Technical University of Munich

Located in the maths department of The Technical University of Munich, the parabolic slide is a work of art, a way for students to get around and a fun attraction for visitors. The slide extends from the fourth floor of the building’s atrium down to the ground and is in the shape of a parabola, which looks like a wide U. Anyone is welcome to zip down, and many have, including a former prime minister of Bavaria. Though technically located in Garching, the maths department’s building is easy to get to on the U-bahn, or the underground, from Munich. 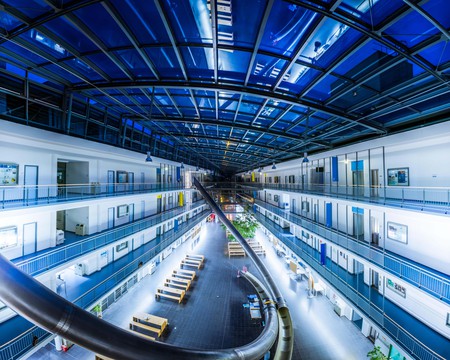 The parabolic slide provides a novel mode of transport for students at the university, and is also popular with visitors | © Hunter Bliss / Alamy Stock Photo

Once a pleasure boat that sailed around the Ammersee – a lake in Bavaria – the Alte Utting was decommissioned several years ago after a six-decade run. A group of friends decided to buy the boat; they cut it in half, shut down the autobahn, and brought it to Munich, where it has become a combination of a bar, food market and events space. Alte Utting’s decks are a great place to watch the sunset, and its indoor areas are a welcoming place to warm up in the colder months. Nearby, the same group of friends runs a popular club in a previously abandoned lot, called Bahnwärter Thiel. Here, you can party inside of a subway car or the main building, or come during daylight and early evening hours for flea markets, dance lessons and exhibitions.

Glamorous and entirely ostentatious, Asamkirche takes baroque style to new heights. Built in the mid-18th century by two brothers, Asamkirche was originally intended to be a private chapel. Today, it’s open to the public and is quite the sight, decorated with a riot of gold, baby blues and pastel pinks, as well as cherubs, angels and ornate flowers.

Channel your inner science nerd at the Deutsches Museum

At 50,000 square metres, the Deutsches Museum is said to be the world’s biggest science and technology museum. Here you will find collections of windmills, locomotives, robots and ships, as well as numerous “firsts”: the first program-controlled computer, the first motorised plane built by the Wright brothers and Diesel’s first engine. Whether you’re interested in astronomy, clocks, musical instruments, transportation, machines or anything else, you’re likely to find something that excites your mind among the 100,000 objects at the museum. 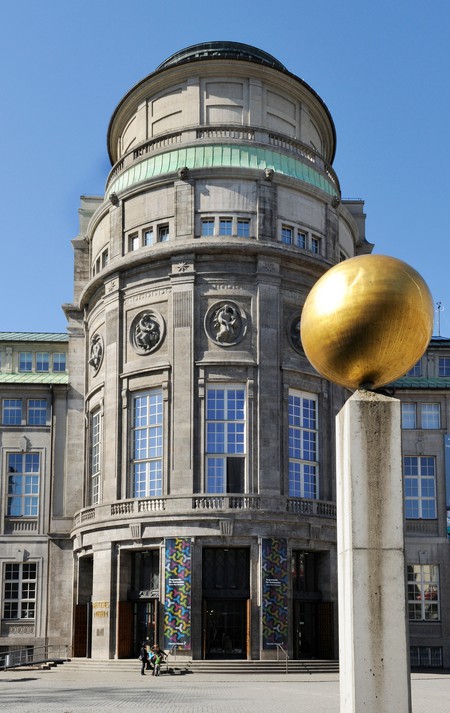