The Best Parks and Gardens to Visit in Germany 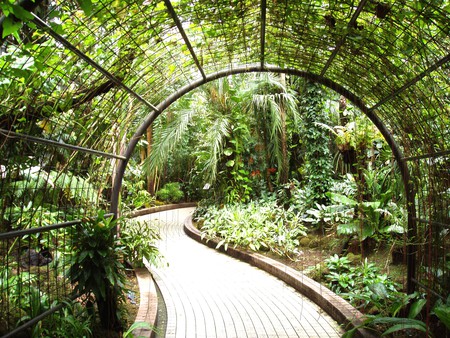 Sure, Berlin is great with all its super coolness, Cologne is fun and Munich is the centre of the lederhosen theme park that is Bavaria. But what if something a little more floral is at the top of your holiday list? No problem. Given how much Germans love nature, it should be no surprise that there are plenty of palace gardens and urban parks teeming with all sorts of trees, plants and water features. Here are 9 we think fit any itinerary.

Located in the southwest of the city on the grounds of a former fortress, the egapark in Erfurt gets around 450,000 visitors a year. Home to the largest ornamental flowerbed in Europe, the park also has a magnificent rose garden, a tropical greenhouse, springtime cherry blossoms in the Japanese Garden, a horticulture museum and a fun farm. They even elect a Flower Queen.

Just two hours south of Stuttgart on the Bodensee, this family-owned garden island has more than 500 species of deciduous and coniferous trees, including a giant sequoia from 1864 and a 65-year-old redwood. In the greenhouse, thousands of butterflies flit about amongst the tropical plants and outside, there are more than 200 varieties of rhododendron and azalea dotted around the island. 20,0000 dahlias (which bloom at the end of August) and 30,000 rose bushes will make any gardener green with envy.

Unlike most of other other large-scale gardens in Germany, the Palmengarten in Frankfurt wasn’t built or funded by an aristocratic family, but by a group of everyday citizen. 6000 botanical species sprawl over 50 acres. Look for dedicated rhododendron, heather, rose, shrub, woodland and rock gardens outside and 13 greenhouses covering every conceivable climate area from sub-Antarctic to tropical rainforest.

Park
Facebook
Email
Twitter
Pinterest
Copy link
Share
Map View
If the restrained elegance and formal structure of a Japanese garden floats your boat then a trip to Hamburg is in order. The straight-forwardly named Park Planten un Blomen (plants and flowers) is home to the largest one in Europe. Classical music concerts in the rose garden and pony rides… magic.
Open In Google Maps
Marseiller Straße, Hamburg-Mitte Hamburg, Hamburg, 20355, Germany
+4940428544723
Visit Website
Give us feedback

Elegant glass houses full of Alpine flowers that bloom all summer, dry stone walls covered in luscious green moss, exotic herbs, edible grains and naturopathic plants in an apothecary garden – the Munich Botanical Gardens have got it all. A teaching garden for the neighbouring university, the Gardens also play a role in the preservation of rare plants and European bee species. Eleven greenhouses allow plants native to biospheres all over the world to flourish despite the harsh Bavarian winter.

Half of Muskau Park is in Germany and half of it is in Poland, but that’s not the only complicated thing about it. The 750 hectare park was created in the first half of the 19th century by the garden-mad Prince Hermann of Pückler-Muskau. The prince had studied gardening in England and spent his entire inheritance and that of his soon to be ex-wife developing his own garden dreamland.

It is now a UNESCO World Heritage Site, so it seems dear Hermann has been vindicated not only for what he left behind, but what he contributed to the field of landscape architecture while he was alive. In any case, he and his ex-wife remained friends. The park has also lakes, an English cottage, a chapel, a Medieval fortress and several elegant bridges and can be explore on foot, by bike, on a boat or in a carriage.

In addition to the usual lakes and fountains usually found in palace grade parks, Sayn Park near Koblenz has a charming number of rare trees, a grotto, Baroque ruins and a chapel. The most popular part of the park in modern times is the Garden of Living Butterflies created by a real live princess.

The palace was bombed badly during the war and finally restored to its former glory in 2000. Staterooms, salons and cabinets all furnished with precious paintings, furniture and artifacts remaining from the original interior decoration, are a delight and welcome respite from glaring summer sun.

The Großer Garten at Herrenhäuser was laid out in 1666 by the parents of England’s King George I. Over the next 350 years, the gardens were continuously developed and expanded to include the Georgen, the Welfen, both made in the English style and the Berg garden, which was one of the first botanical gardens in Europe.

The first African violet to bloom in Europe did so in one of Herrenhäusen’s greenhouses and the original hedge theatre still hosts performances during summer festival weeks. In the 21st century, the Rain Forest House, Prairie garden and Schmuckhof ornamental courtyard are rather popular.

Sitting between Cottbus and Görlitz in super east Germany, Azalea and Rhododendron Park Kromlau is its own delight – more than 200 hundred acres of forest, flowers, lakes and ponds in the English style and azaleas and rhododendrons everywhere. But what makes the Botanika in Bremen really a must visit is the Rakotzbrücke or devil’s bridge. The legend is that death will befall anyone who dares cross it, though there seem to be many on Instagram who have lived to tell the tale.