The Best Locations to Celebrate Carnival in Germany 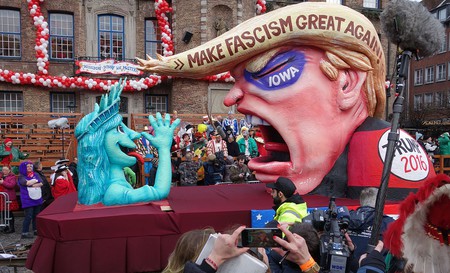 In Germany’s Rhineland, carnival season lasts for four months . So if you’re looking to celebrate the German way, with kisses, beer, parades, and more beer, then check out our list of carnival cities.

Carnival, here, is a four-month celebration that begins at 11 minutes past 11 o’clock on the 11th day of the 11th month. The craziness begins on Thursday, when women scour the streets, cutting off men’s ties, and peaks on Rosenmontag (Rose Monday) with parades, parties, kissing and plenty of boozing at the Alter Markt.

Rivaling Cologne in literally everything from soccer to beer, it’s no surprise Düsseldorf seeks to top its neighbour in carnival celebrations too. Unlike Cologne’s romantic, traditionalist approach, DD goes straight for scathing, with political floats like the one picture, of Donald Trump screaming, “Make Fascism Great Again.” Festivities begin when the Hoppeditz awakens on November 11 and concludes on Rosenmontag with the famous political parade and a jaunt through the Alt Stadt, also known as the longest bar in the world.

Those thinking carnival is too focused on booze and not enough on class need to head to the Määnzer Fassenacht, which is an exhibition in pure, posh fun. Focused on political and literary humor, Mainz adds a bit of sophistication to Carnival. And what says ‘class’ more than a parody of Adolphe Adams’s opera, Le Brasseur de Preston?

Who’d have thought the City of Charlemagne held such contempt for the military? At least, that appears to be the case during carnival. Aachen’s celebration has historically focussed on poking fun at the men in uniform. Though, in recent years, it’s fallen out of fashion but the city still joins in with some cheeky ridicule. The motto here is, “Spass an der Freud” (have fun with joy in your heart). 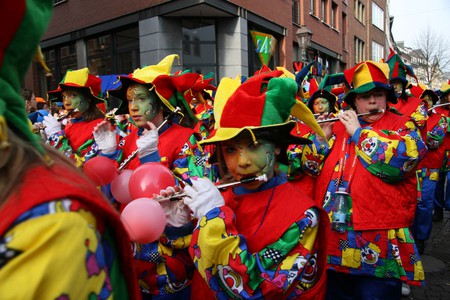 Not known for partying, Münster musters a damn good bash for carnival. In fact, it’s so good neighbours from the Netherlands have been showing up en masse to celebrate the 110-year-old Münster tradition. Like every German carnival, the highlight occurs on Rosenmontag, during which over one-hundred colourful floats paint the city centre.