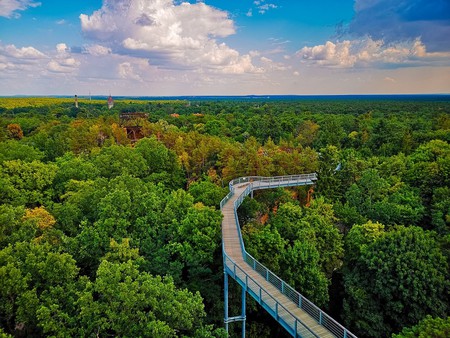 The Beelitz canopy walk from above | © Mathiasgammelholm / Pixabay

If you’re headed to the Brandenburg capital, plan for an extra day or two to explore the surrounding region. From the electrifying buzz of Berlin to the serene landscape of the Spree Forest, Brandenburg has a whole range of places just waiting to be discovered. Here’s our pick of the best historical sights, tranquil landscapes and cultural places which make for great day trips around Potsdam.

From Potsdam it’s only a 45-minute drive or 20-minute train ride to the Germany capital, making Berlin the obvious choice for a day trip. The trendy metropolis offers myriad things to do: you can trace the historical remnants of the Berlin Wall and other sites of post-war Berlin and the GDR, uncover the archaeological and artisan treasures in the museums along the Museumsmeile, go bar-hopping in Kreuzberg, rummage through the bric-a-brac and handmade items of the Mauerpark flea market in Prenzlauer Berg, or dance the night away in Berghain and Watergate. 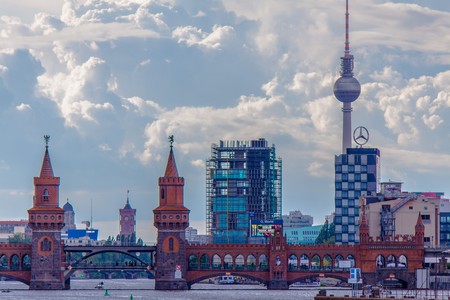 Film fans should put Babelsberg Studios on their list of must-sees. The quick 15-minute train ride is rewarded with a tour of Germany’s equivalent to LA’s Universal Studios. As one of the world’s top film studios, Babelsberg has seen Hollywood stars by the likes of Quentin Tarantino and George Clooney use the facilities to shoot Inglorious Basterds and Monuments Men. Guided tours take you around the set of popular German TV series, explain props, costumes and technical equipment, and even let you practice your skills as weather forecast presenter.

The birthplace of Reformation leader Martin Luther is situated approximately 90 kilometres (56 miles) south of Potsdam and lures with several monuments dedicated to the historical figure, such as the Lutherhaus museum. Other must-see sights are Cranach House, the castle church and the picturesque market square with its gables townhouses and the 16th-century town hall which, as an ensemble, gained UNESCO World Heritage Site status in 1996. 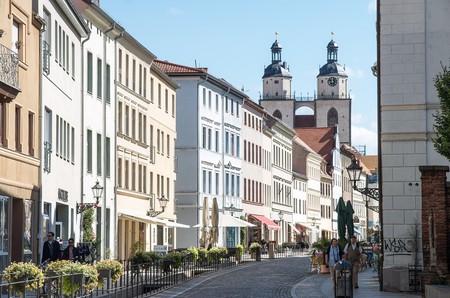 If you don’t mind taking an hour-long drive south, you can roam one of Germany’s most beautiful parks and another UNESCO site. The sprawling lands of the Garden Kingdom of Dessau-Wörlitz encompass a whopping 142 sq kilometres (55 sq miles) and were the first English-style landscape garden when they opened in the late 18th century. The vast meadows are studded with several chalets and palaces, decorated with beautifully-arranged flower beds and feature a lake and several ponds which are connected by canals and wooden bridges.

Halfway between Berlin and Dresden, the Spree River has carved a mesmerising labyrinth of waterways, moorlands and pastures into the countryside popular with loved-up couples and honeymooners who hide out in the lovely riverside cottages. That’s not to say that other travellers won’t enjoy their time here. Lübben is a good hour’s drive from Potsdam, but once you get there you can embark on a boating trip aboard a wooden barge or paddle boat and sail down the purling stream. 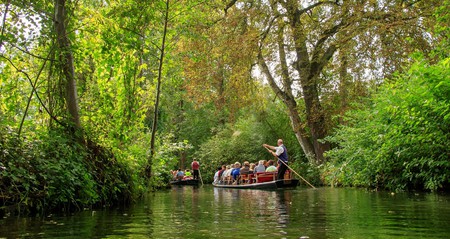 A day at the lake

The stretch between Potsdam and Berlin is known for its many lakes which make for the perfect spot if you want to cool down on one of those hot summer days and escape the city centre buzz. Direct trains connect you to the popular Wannsee and Schlachtensee lake, where sandy beaches and lush forested take turns along the shoreline. Both lakes have boat rental stations and a restaurant with outdoor seating if you grow hungry from all the watersports fun.

For years on, the abandoned complex of the Beelitz Heilstätten hospital half an hour south of Potsdam attracted so-called ‘lost places’ photographers and daring travellers, but the city eventually shut down the nightly visits after several vandalising incidents. Instead, tourists now get to explore the former military hospital perfectly legally by following a canopy walk along a wooden boardwalk or by joining a guided photography tour.

The Beelitz canopy walk from above | © Mathiasgammelholm / Pixabay
Give us feedback