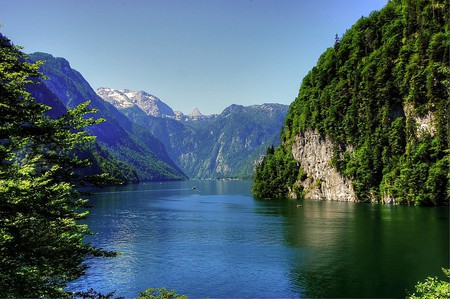 Wedged into the south-easternmost corner of Germany, the Berchtesgaden region lures with a myriad of activities and possible day-trip destinations. Our curated list of the best spots is composed of natural wonders and cultures sites, ranging from stunning lakes and hikes through the Bavarian Alps to hilltop castles and Nazi-era memorial sites. Read on for the details.

Given you’re right at the Austrian border, a fleeting visit to Germany’s neighbouring country is worth considering. Salzburg is a 40-minute drive north from Berchtesgaden and the obvious choice for lovers of classical music, romance and historical architecture. Follow in the footsteps of Wolfgang Amadeus Mozart, Germany’s great composer; climb up to the Fortress Hohensalzburg for panoramic views of the city; explore the winding streets of the old town and enjoy a cold Stiegl beer. 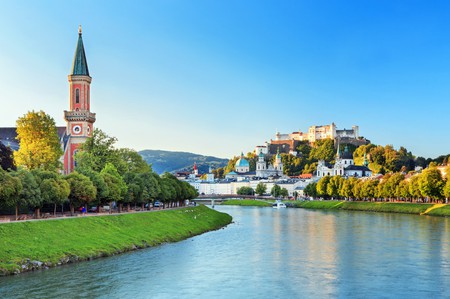 The Schellenberg Ice Cave is located only 15 kilometres north of Berchtesgaden and allows you to crawl into the permanently-frozen underground of the Berchtesgaden Alps. Getting to Germany’s only publicly-accessible ice cave involves several hours of hiking up to an altitude of 1,000 metres – not for the faint-hearted. The determination and perseverance of those who take on the challenge are rewarded with a 40-minute tour of the icy caverns. Tours only run between May and October when the meltwater runs off and congeals into bizarre ice formations. In the winter months, the entrance is hidden under layers of snow.

If you’re looking for a destination where you can combine outdoorsy fun with sightseeing, head to Chiemsee lake, 60 kilometres north-east of Berchtesgaden. The lake encompasses a whopping 80 square kilometres, making it a mecca for watersports enthusiasts who flock here for a round of kite or windsurfing, kayaking, stand-up paddleboarding and other joyous activities. Those with a thing for architecture and history are best advised jumping aboard a ferry to the Herrenchiemsee islet and explore the sprawling grounds of the opulent Rococo palace that was built by the ‘mad king’ Louis II, the man who’s also behind Neuschwanstein Castle and Linderhof Palace. 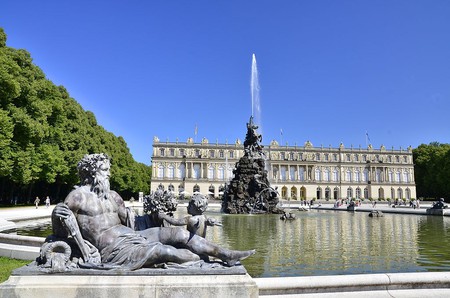 Another attraction that lures visitors to Berchtesgaden over the border to Austria is the imposing Hohenwerfen Castle, which towers atop a hill over the Salzach valley. The drive over takes approximately 45 minutes and is rewarded with a tour of the Medieval castle, including the chapel, bell tower, torture rooms, and royal chambers, as well as a prey show at the falconry. Some might recognise parts of the 11th-century building from Just Married with Ashton Kutcher and Brittany Murphy, or from Amazon’s The Man in the High Castle series.

Thousands of years of trickling melt and rainwater have taken their toll on the steep rock around Wimbach River near Ramsau, slowly carving what’s today known as the Wimbachklamm Gorge out of the stone. The result is a rushing river carrying icy glacial waters winding through the landscape. Visitors can explore this natural beauty along wooden boardwalks through the gorge. The trail starts at the bottom and crawls upwards, but is only open between May and October. If you are after more picture-perfect vistas, take a detour via Ramsau village and enjoy the view of the town church dwarfed by the Alps in the background. 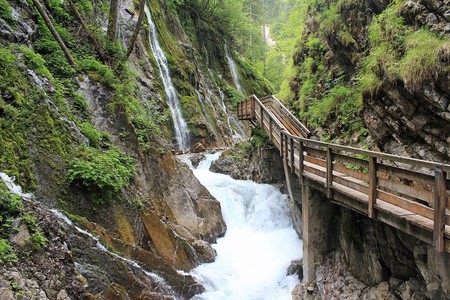 The Kehlsteinhaus, or Eagle’s Nest as it’s often called, was Hitler’s preferred holiday home, and after 1933 was expanded to serve as the second seat of government where he carefully planned out the mass murder of millions of people. Today, the building serves as a mountain hut and restaurant with panoramic views of the surrounding peaks – an attempt to put the well-preserved building to positive use. A highlight is a ride in the fancy brass-and-glass decorated elevator. If you want to learn more about the history of the place, you can visit the Dokumentation Obersalzberg at the foothill of the mountain, which documents the harrowing acts of the Nazi regime and the subsequent development of the site.

The last pick of our list might be too obvious, but any trip to Berchtesgaden town should be combined with a day’s worth of outdoorsy fun in the national park. The park boasts some of the best hiking trails in all of Germany, catering to everyone from families with kids and leisure hikers to experienced mountaineers. If you only have a day to spare, the hike from the idyllic Königsee lake up to Obersee lake offers jaw-dropping vistas and plenty of opportunities to go for a dip or jump on a boat across the lake should you get tired of walking.