The Best Cities and Towns to Visit in Southern Germany 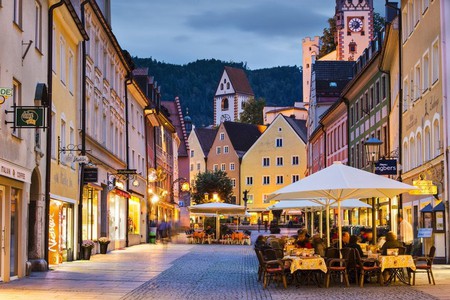 Southern Germany is a fascinating mishmash of merry folk festivals, fairy-tale towns untouched by time, stunning futuristic cities, quintessential German medieval towns, glitzy ski resorts, a string of castles, and endless history and culture. It is surrounded by the majestic Bavarian Alps and dotted with crystal-clear alpine lakes, making it one of the most stunning regions in the country. Though the entire region is worth exploring, here are a few destinations in Southern Germany that you must not miss at any cost.

The bustling city of Munich is among the most popular cities in Germany and has something for everyone. Whether you are interested in architecture, history, fashion, literature, music, traditional German cuisine, or art, Munich will effortlessly keep you busy for days on end. It is also known for hosting super-fun festivals, the most famous of which is Oktoberfest. Munich is also a wonderful base from which to explore much of South Germany. 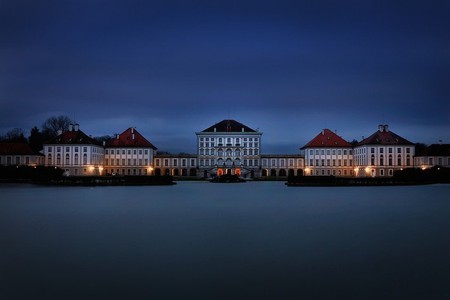 Sitting in the lap of the majestic Bavarian Alps and dotted with mirror alpine lakes, the town of Garmisch-Partenkirchen is a land of surreal beauty. It’s a top destination of choice for winter sports enthusiasts, as well as travelers who can’t resist spectacular mountain scenery, the purest air, and dollops of culture and history. Zugspitze, the highest mountain peak in the country, looms over this little town and welcomes travelers to take a cogwheel and cable car ride to its zenith to enjoy uninterrupted views of mountain peaks across four countries. 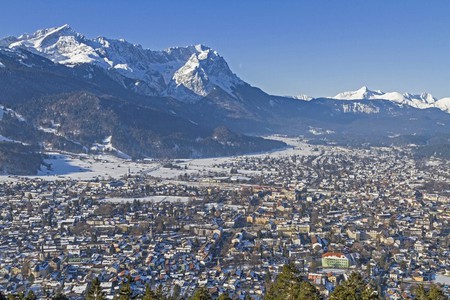 Garmisch Partenkirchen and the mountains Zugspitze and Alpspitze | © Eder / Shutterstock

Lindau is a dreamy city on the shore of Lake Constance. Its skyline is dominated by a 108-foot (33-meter) lighthouse and a 20-foot (six-meter) lion, which guard the gateway to this beautiful harbor city. As you step into Lindau old town, prepare to be enthralled by its storybook houses, web of cobbled lanes, and stunning historic baroque, Renaissance and gothic architecture. 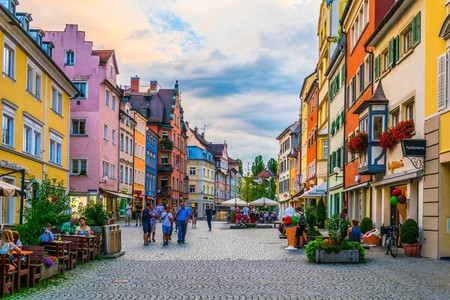 Stuttgart is an amazingly well-planned, beautiful city that is ready to drench you in entertainment and culture. It boasts a series of world-class art museums and galleries, two glittery automobile museums (Porsche and Mercedes Benz) and several fun museums for children. It is also home to the only combined zoo and botanical garden in Europe, the Wilhelma. 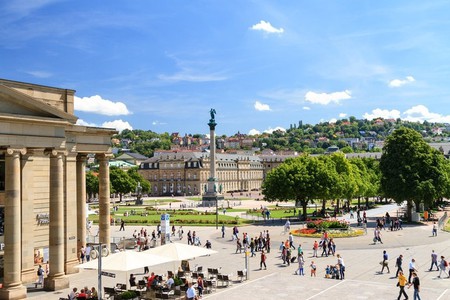 The university town of Heidelberg is a cultural and intellectual hub that has found its way into many literary works by eminent authors. The most famous landmark in town is the sprawling early 13th-century Heidelberg Castle, which houses the world’s largest wine barrel. The Heidelberg University Library is as magnificent inside as it is outside and is a treasure trove of books, including some rare ones. The old bridge over the river is the perfect spot to soak up the ambience of the vibrant town and click Instagram-worthy pictures. 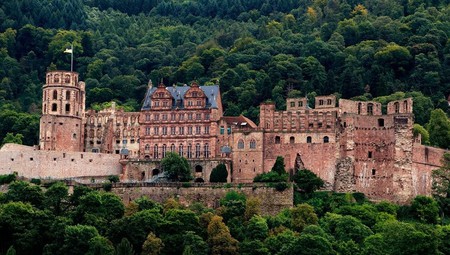 Regensburg, a UNESCO World Heritage Site straddling both sides of the River Danube, has impeccably preserved over 1,000 historic monuments, many of which date back to Roman times. The historic old town meets its modern sister on the other side of the river via the Old Stone Bridge. This is the most picturesque spot in Regensburg and a perfect background for your holiday photos. 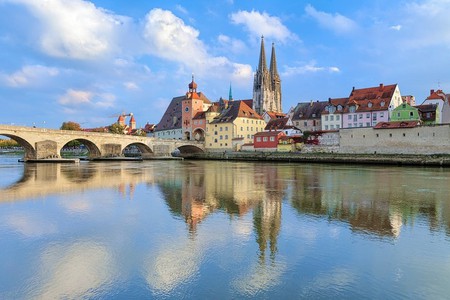 View from the Danube to Regensburg Cathedral and Stone Bridge in Regensburg, Germany | © Mikhail Markovskiy / Shutterstock

The university town of Freiburg im Breisgau is relatively unsung compared to other destinations in Germany’s famous Black Forest, but is undeniably beautiful. While the city skyline is adorned by Freiburg Minster, New Town Hall, Martin’s Church, Haus zum Walfisch (“House of the Whale”), and Martinstor (“Martin Gate”), the roads catch visitors’ eyes with their mosaic motifs and Bächle (narrow street-side canals). 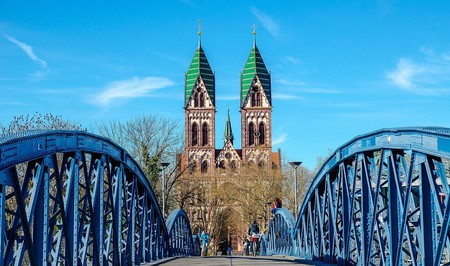 The little town of Rothenburg ob der Tauber is almost unanimously agreed to be the prettiest in Bavaria, and also one of the most captivating in the entire country. You have probably heard the term “fairy-tale town” more often than seems reasonable, but there is certainly no better way of describing Rothenburg ob der Tauber. It is impossible not to fall in love with its maze of cobbled alleys, bright houses with flower-box windows, adorable shops, and exemplary Christmas ornament stores. 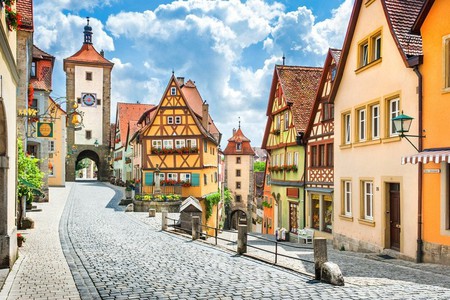 Though it is often used as a base for exploring Neuschwanstein Castle, the city itself has a lot to offer. Füssen, known for its violin-making industry, perches in a setting of imposing mountains and crystal-clear lakes 3,937 feet (1,200 meters) above sea level, along Germany’s iconic Romantic Road. Travelers invariably lose their hearts to the town’s cobbled alleys, quaint cafés, and beautiful houses.

Bamberg is a typical medieval German town that draws tourists with its palpable historic charm and quaintness. The town stretches over seven hills, gazing down at the River Regnitiz. The old town of Bamberg is a UNESCO World Heritage Site and boasts beautiful architecture and loads of culture. The most famous landmarks in Bamberg include the Altes Rathaus (“Old Town Hall”), Bamberg Cathedral, Neue Residenz, Schloss Seehof, Altenburg Castle, and Little Venice (a picturesque cluster of colorful half-timbered houses by the river). 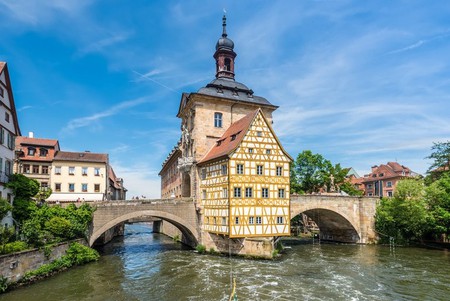 Historical city hall of Bamberg on the bridge across the Regnitz, Bamberg, Germany | © byvalet / Shutterstock
Give us feedback