The Best Bars for Craft Beer in Berlin

The 1516 Reinheitsgebot (German Beer Purity Law) allowed German brewers to use only hops, barley and water in their beers. A tweak to the law saw yeast added to the list. In modern-day Berlin, craft brewers are challenging this strict rule and beginning to get creative.

Unfazed by centuries-old regulations, Berlin’s craft brewers are producing some of Europe’s best IPAs, pilsners and wheat beers, while a host of bars are offering brews from around the world. A former butcher’s shop, a cosy Italian watering hole and a lodge-like hideaway are among the best bars for craft beer in Berlin. 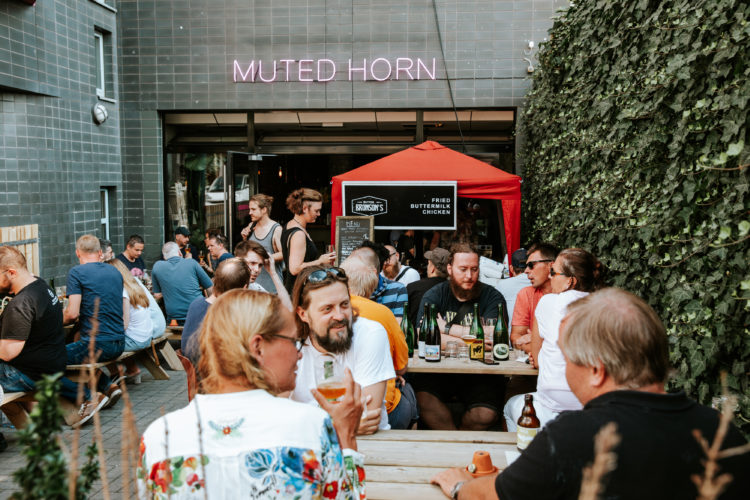 The glowing neon pink sign of Neukölln’s Muted Horn feels like an invitation to stop and take in the late afternoon sun with a drink or two on its secluded patio. Step inside, and you’ll find a huge selection of bottled craft beers – sour ales with seasonal fruit notes from Cascade, chocolatey stouts from Evil Twin and even more unusual options, such as a pumpkin mead from Superstition. There’s also a range of gluten-free ciders, with flavours including blackcurrant, bergamot and elderflower. Stop in for a couple of drinks in the early evening before heading to nearby Tempelhofer Feld to take in the sunset over the airfield-turned-city-park.
More Info
49 Flughafenstraße, Bezirk Neukölln, Berlin, Berlin, 12053, Germany
Visit website 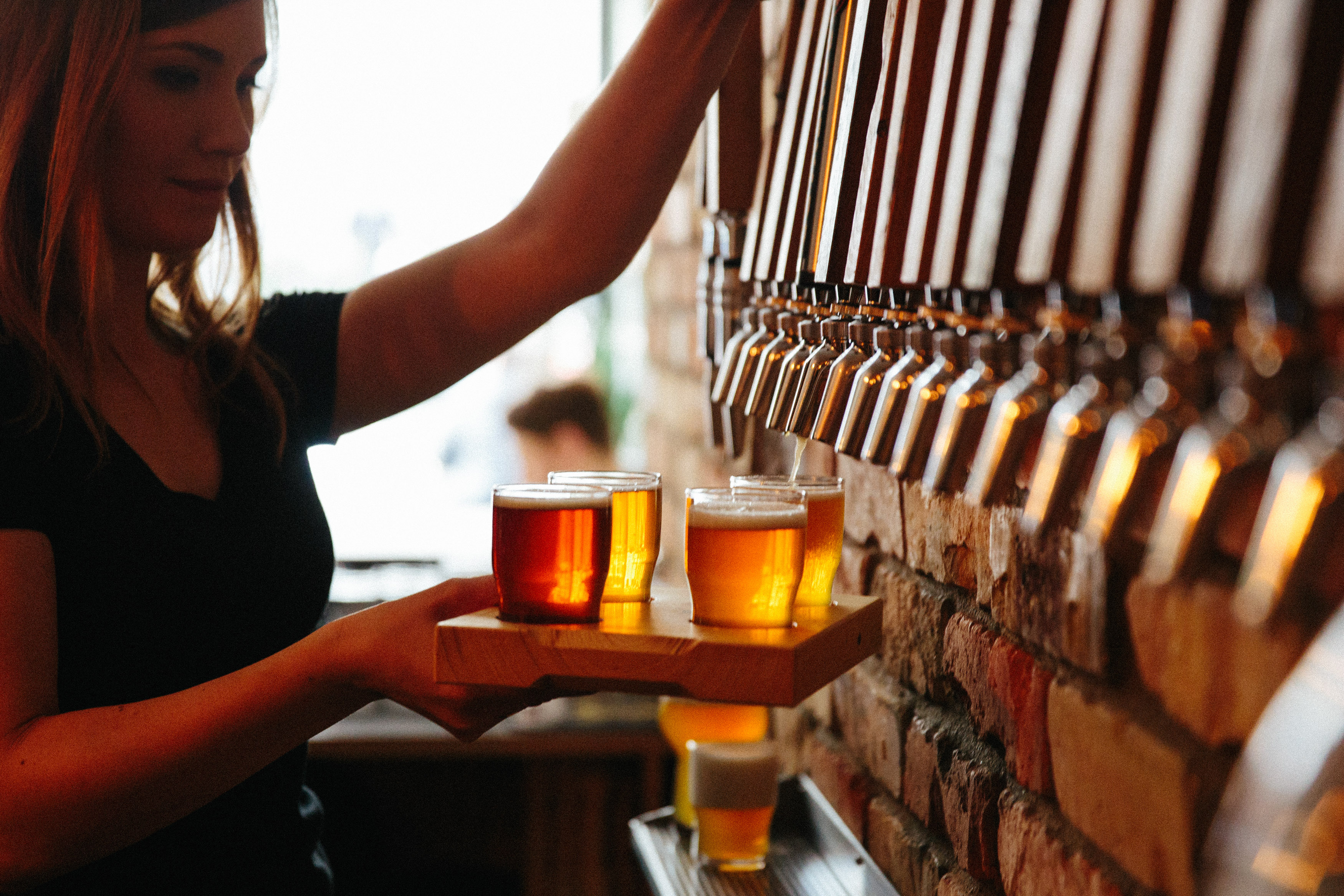 Eschenbräu
Bar, Craft Ale Bar, Pub Grub, Beer$$
Just outside the no-nonsense facade of a government building in Wedding is Eschenbräu, a Sprengelkiez neighbourhood favourite. In the evenings, purple and blue lighting illuminates the industrial interior. Venture inside to sit among copper and silver beer-brewing machinery, or in the warmer months, gather at the tables just outside. Eschenbräu is a brewery for all seasons, a quality reflected in its rotating selection of seasonal beers. If you’re feeling peckish, you can bring your own food or try the brewery’s much-loved flammkuchen (otherwise known as German pizza). Those who are into the stronger stuff should also check out the range of liquors that are distilled in-house.
More Info
67 Triftstraße, Mitte, Berlin, Berlin, 13353, Germany
+491624931915
Visit website
Hops & Barley
Bar, Craft Ale Bar, Pub, Pub Grub, Beer$$ 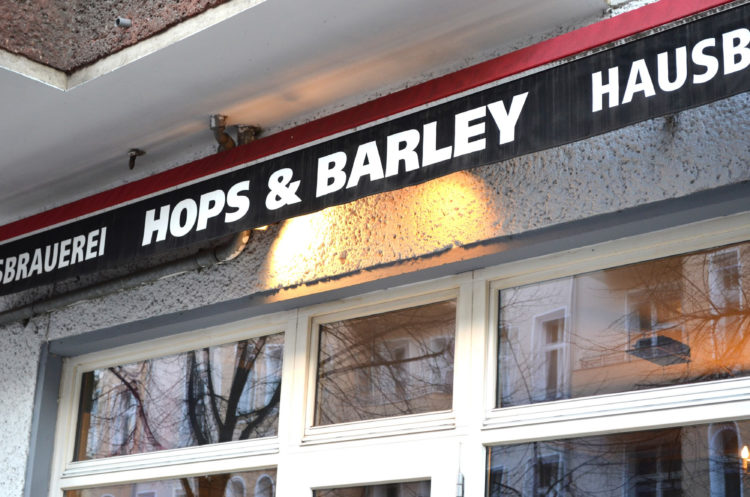 Stepping into Hops & Barley, housed in a former butcher’s shop, may feel a bit like entering your grandmother’s living room. The minimalist but kitschy look gives off a homely feel, letting the beer stand in as the main attraction. Sidle up to the polished wood bar to see what’s on tap, and sip your selection outside as you watch the ultra-hip Friedrichshain residents gear up to dance until they drop at nearby clubs such as Berghain. Once you’ve had your fill, wander through Boxhagener Platz, where you’ll find plenty of places serving late-night munchies, including Lebanese fare from Imbiss Sanabel. If you’d like to learn a bit more about the beer-making process, sign up for a brewing course or book a brewery tour.
More Info
22/23 Wühlischstraße, Bezirk Friedrichshain-Kreuzberg, Berlin, Berlin, 10245, Germany
+493029367534
Visit website
BRLO Brwhouse
Bar, Craft Ale Bar, Restaurant, Beer, $$$ 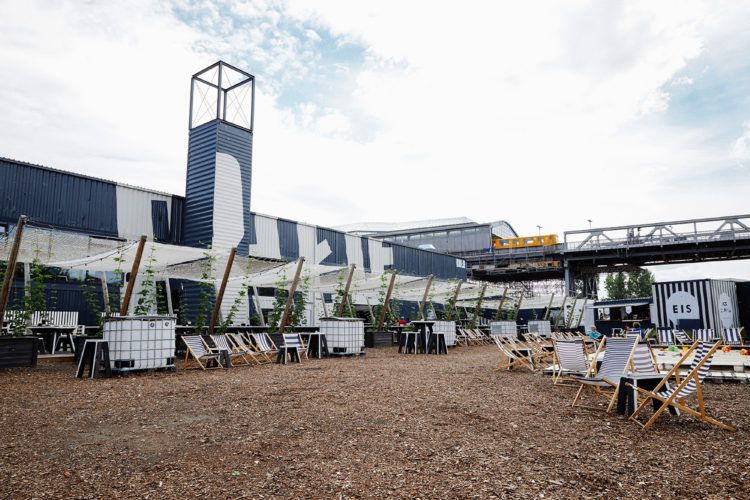 Right near Schöneberg’s favourite local hang-out, Park am Gleisdreieck, BRLO’s brewery, bar and restaurant trifecta serves up artisanal beers and a menu featuring novel vegetable dishes (think carrots and liquorice or celery and rhubarb) paired with regional meats. With a mix of different small-batch brews, such as a CBD-infused double IPA, it’s worth your while to get a flight of different beers to sample. What makes BRLO’s beers so unique? “Our malt is strictly organic … And we use fine aroma hops to create the unique BRLO flavour,” says Susanna Glitscher, a BRLO spokesperson. Budding brewers may be curious to look behind the scenes at one of its public brewery tours (with optional tastings), held every Wednesday and Saturday.
More Info
16 Schöneberger Straße, Bezirk Friedrichshain-Kreuzberg, Berlin, Berlin, 10963, Germany
+493055577606
Visit website 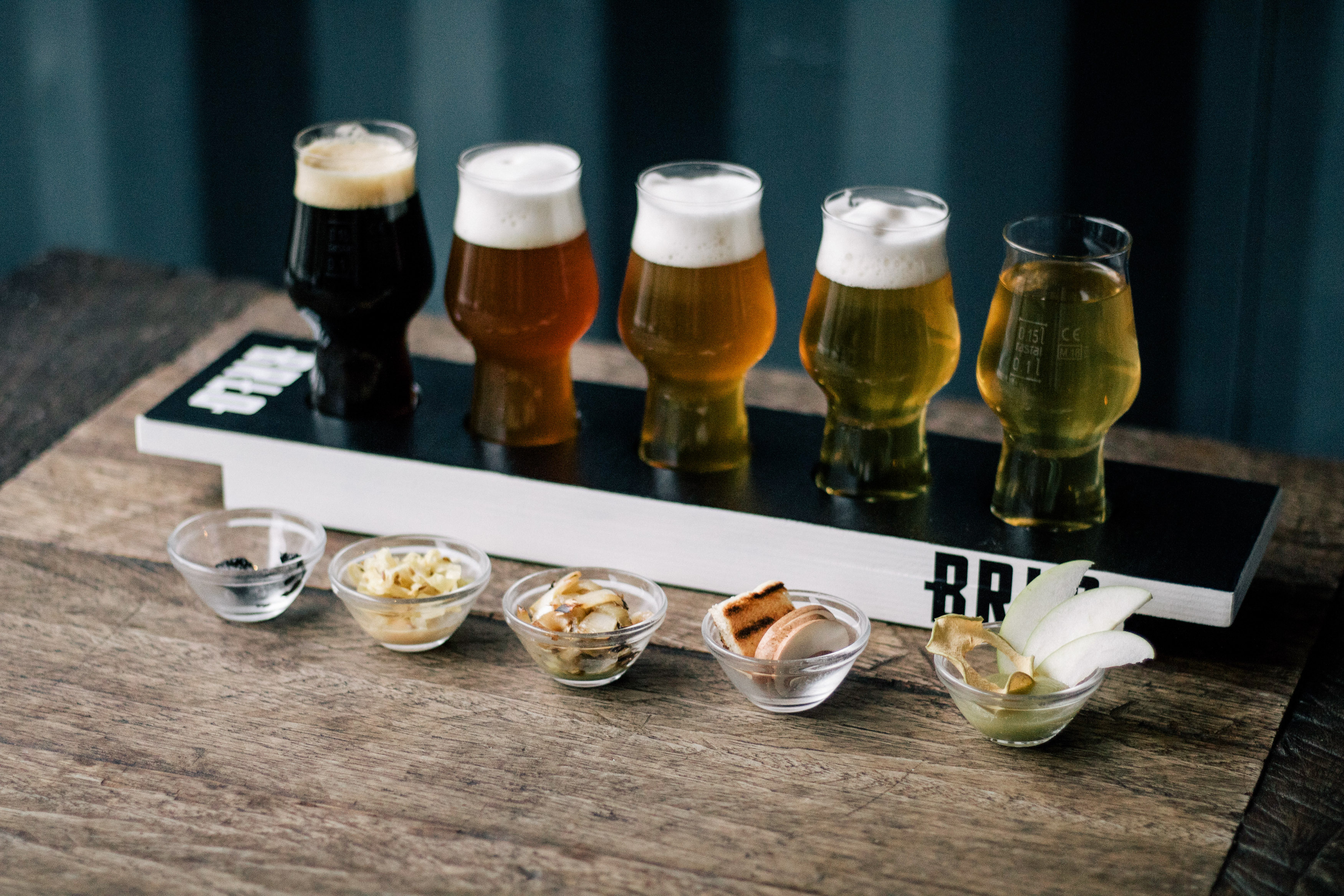 BRLO offers a tasting board with food pairings | © Natascha Gass

This Mitte bar brings a taste of the Nordic to Central Berlin – including its name, Kaschk, which is a twist on the formidable Nordic cocktail karsk (a mixture of coffee and moonshine). Kaschk operates as a coffee shop by day and a bar by night, meaning you can drink Scandinavian brews until late in the evening, then come back again the next morning to soothe your hangover with a chocolate croissant and a shot of caffeine. Enjoy the outdoor seating in the summer and sip on home-made glühwein (similar to mulled wine) in the lodge-like bar area during the winter. Be sure to head into the basement for a game of shuffleboard (and if you’re really good, keep an eye out for Kaschk’s shuffleboard championships).
More Info
40 Linienstraße, Mitte, Berlin, Berlin, 10119, Germany
Visit website

Cosy, Quirky, Boutique, Arty
Birra – Italian Craft Beer
Bar, Craft Ale Bar, Beer, Italian, $$$
The spotlight in this homely Prenzlauer Berg joint is on Italian craft beers. Featuring a mix of brews from its namesake brewery in Milan, Birra has the expected IPAs and ales, as well as more intriguing choices like a chocolate lager and a smoked stout. The knowledgeable bartenders are happy to discuss your preferences, offering a taste or two to help you find your ideal flavour. The bar is small but welcoming and has the friendly atmosphere of a regular neighbourhood hang-out. Stop in on Sundays for a well-deserved rest and a plate of Italian meats and cheeses after perusing the wares at the nearby Mauerpark Flea Market.
More Info
198 Prenzlauer Allee, Bezirk Pankow, Berlin, Berlin, 10405, Germany
+493055243713
Visit website
Hopfenreich
Bar, Craft Ale Bar, Beer, $$$
The soft glow of this Kreuzberg institution’s candlelit interior draws you in for a sample from its craft beer selection. With 22 beers on tap, it can be difficult to choose; luckily, Hopfenreich offers the Craft Beer for Dummies course to give you the low-down on the main beer varieties. Pick your favourite (this spot tends to have a particular abundance of IPAs) and settle down for an hour or two. After you’ve had a few, head outside and stroll the neighbouring cherry-tree-lined canals or hop across the River Spree to the East Side Gallery.
More Info
31 Sorauer Straße, Bezirk Friedrichshain-Kreuzberg, Berlin, Berlin, 10997, Germany
+493088061080
Visit website
Protokoll Berlin
Bar, Craft Ale Bar, Beer, $$$
Set behind gleaming yellow tiles, Protokoll Berlin’s 24 on-tap beers are constantly changing, but always measure up to the bar’s high-quality standards. The crème de la crème are the selections from Moscow’s Zagovor Brewery, served alongside fruity lambics from Belgium and several locally made craft beer varieties. If the weather is nice, head outside where there’s always a sociable evening crowd in front of the signature blue storefront. If you want to have a quick bite while you taste your way through the menu, feel free to bring your own food – the location, right in Boxhagener Platz, makes finding cheap and delicious to-go fare easy.
More Info
110 Boxhagener Straße, Bezirk Friedrichshain-Kreuzberg, Berlin, Berlin, 10245, Germany
+4917660886670
Visit website

This article is an updated version of a story created by Rachel Miller.