The 10 Best Things to Things to See and Do in Lüneburg, Germany 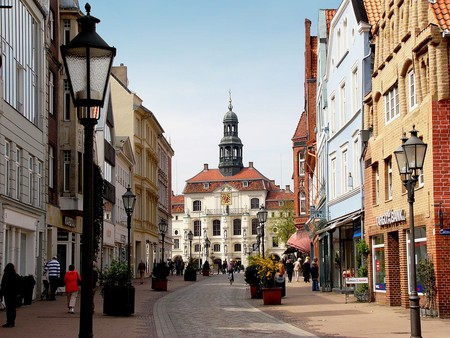 The historic town of Lüneburg lies south of Hamburg, amid a fairytale landscape of heathlands and meadows. In the Middle Ages it was a vibrant trade hub, and today boasts a beautiful medieval town centre. If you’re planning a trip, check out our pick of the top things to see and do when you’re in town.

If you want to see the town’s medieval charm in all its glory, head to the Am Sande market square. The cobblestone plaza is surrounded by beautiful gabled houses and overlooked by the dark grey facade of the Chamber of Industry and Commerce on one side, and St John’s church on the other. In the Middle Ages, however, the plaza was covered in sand rather than cobbles – hence the name – making it a lot easier for the merchants to manoeuvre their horse and ox carts to the market. 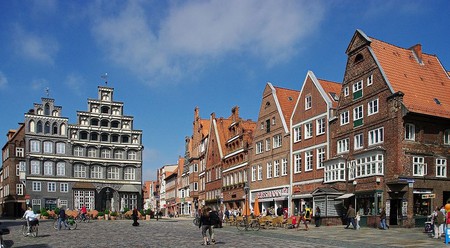 Am Sande I | © Joergens / WikiCommons

The reason Lüneburg became one of the region’s most important trade hubs was salt. Its large salt deposit was discovered by pure chance, but secured Lüneburg a monopoly in salt production in all of Northern Europe. Eventually, the city pulled ahead of competing trade hubs and joined the prestigious Hanseatic League. The local museum explores the fascinating history of salt mining in Lüneburg and the influence the white gold had on the city and its people.

The cornerstone for the historic town hall was laid in 1230, but the construction of the building stretched over centuries and incorporated architectural elements from various epochs. A storm heavily damaged the original Gothic facade in 1703 – it was torn down and replaced with the spectacular Gothic front you see today. While the building as such is quite the eyecatcher, the real beauty of the town hall and the wealth of the city only reveals itself during a guided tour of the lavish interior, which boasts murals and frescoes and intricate wood carvings.

Lüneburg’s oldest church dates back to 927 and is known for the 14th-century tilted steeple that immediately catches the eye. Legend has is that when he saw the crooked tower, the architect responsible for its creation threw himself off it wracked by guilt, but landed safely in a passing hay cart. Interpreting the incident as God’s will, the man celebrated his second chance with too much to drink at a local pub but unfortunately ended up tripping and breaking his neck the same night. Legend aside, the highlights here are the high altar and the beautiful Baroque organ. None other than the German composer Johann Sebastian Bach learned to compose here when his uncle served as the choirmaster of St John’s.

In the Middle Ages, the Stintmarkt was the scene of the local fish market. The old harbour crane is a reminder of the time when ships unloaded their catch of Stint, a small variety of herring. Today, Lüneburg is better known for having one of the highest concentrations of pubs in all of Europe, and the waterfront neighbourhood is thriving with bars and pubs instead. Their terraces and beer gardens give idyllic views of the historic cityscape and the two historic water mills that processed crops in the 16th century. 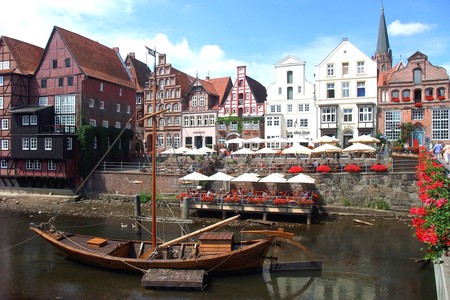 The 56-metre (184-foot)-high water tower joins the three Gothic steeples of Lüneburg’s churches that soar into the sky. The tower was built in 1907, and its tank held half a million litres of water that was fed into the city’s supply network. It no longer serves its original purpose, but is used as an events space and lookout point. A lift takes you to a platform at the top which grants panoramic views over the city’s red-shingled houses.

Lüneburg is surrounded by a fascinating landscape of heathlands and meadows which span the region between Hamburg, Bremen and Hannover. The late summer months are when the heather blossoms, transforming the rolling hills into a sea of lilac and purple flowers. An extensive network of walking trails and cycling routes traverses the national park and make the countryside and are worth exploring if you’re in the area. 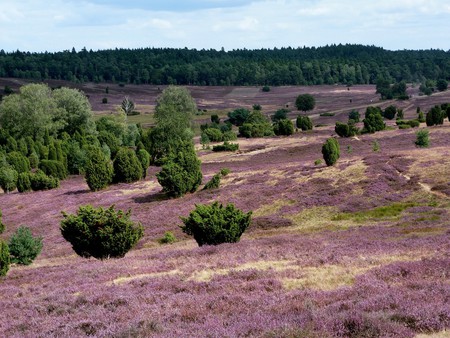 A short walk from the city centre takes you away from the buzz and into a nature reserve. The Kalkberg chalk hill bears the remains of a large gypsum deposit that was discovered underneath the salt dome. Most of the 70-metre (23-foot)-high hill was removed but in 1878, the highest peak was put under protection and some 50 years later was declared a conservation area. Even though the Kalkberg only measures 58 metres (190 feet) in height these days, the hill is a great spot for views of the city and to watch the sun set.

Just outside the city centre is Lüne Abbey, a Benedictine monastery which was founded in 1172. The well-preserved buildings and gardens are an oasis within Lüneburg and can be visited throughout the year. The on-site textile museum explores the art of weaving which has a long tradition at Lüne Abbey, and between April and October, guided tours tell you more about the history of the building. 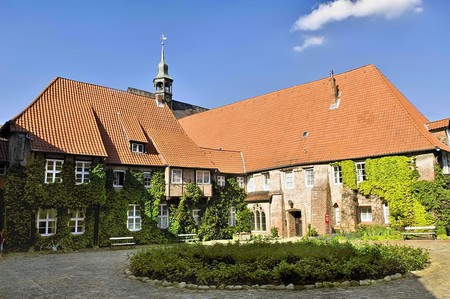 We’ve already mentioned the high number of bars, pubs, bistros and restaurants earlier, and a trip to Lüneburg wouldn’t be complete without exploring what the nightlife has to offer. Much of it is thanks to the fact that Lüneburg is quite the popular university city. The youthful charm spread by the students invigorates the historic city centre. Try a visit to Pons, Lüneburg’s oldest pub, that bridges the gap between old and new with a rustic interior and a modern menu that even caters to vegetarians and vegans.