The Most Stunning Cathedrals and Churches in Germany

Cologne Cathedral | © Pexels / Pixabay
It doesn’t take a religious mind to appreciate the spectacular cathedrals and churches in Germany. They are steeped in history – sometimes glorious, often turbulent – and boast jaw-dropping workmanship. Stay with us as we take you on a tour of the soaring spires, ornate domes, gorgeous stained-glass windows, and rich heritage of Germany’s religious architecture.

Cathedral, Church
As far as cathedrals in Germany go, Cologne Cathedral is unrivaled. This stunning Gothic cathedral is a World Heritage Site and the most visited site in Germany. Tall spires soaring to the skies, the flying pinnacles, and the magnificent carvings adorning the exterior and interior of this cathedral add up to no less than a feast for the eyes. Entry to the cathedral is free but paid guided tours of the excavations, the roof and the treasury are also offered.
More Info
Open In Google Maps
4 Domkloster, Cologne, Germany
+4922117940555

Dresden Church of Our Lady

The city of Dresden is known for its mind-blowing architecture, a jewel among which is the Dresden Church of Our Lady (Frauenkirche). This 18th-century church was hit hard during the Second World War, but emerged as beautiful as ever out of its ashes in the late 20th century. The builders relied on old photographs and documents and even used a large amount of material salvaged from the ruins of the church to recreate this architectural wonder. 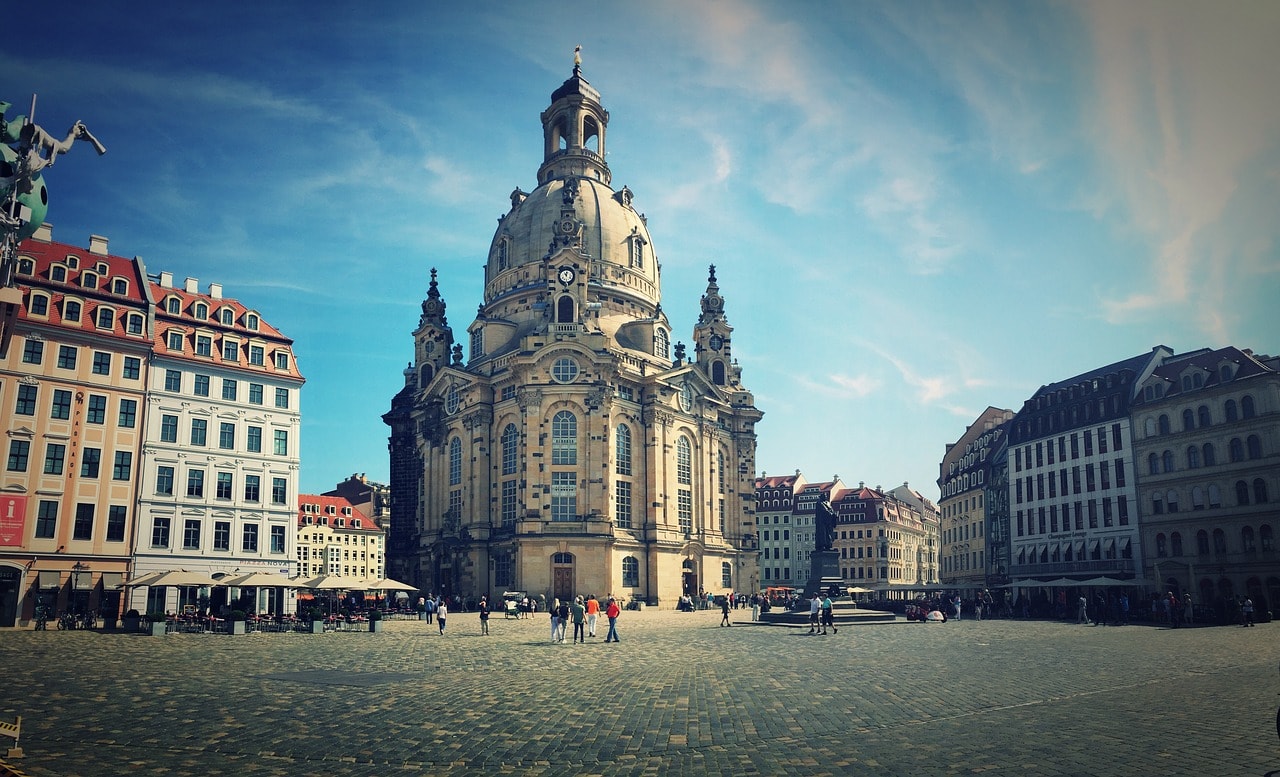 Standing proud as the tallest church steeple in the world (161.5 meters / 530 feet), Ulm Minster is among the most admired pieces of Gothic architecture in Europe. It took long enough to be built (513 years: 1377-1890) but the wait was sure worth it. Visitors from all over the world come here to gawk at intricately carved oak choir stalls, life-like sculptures and splendid stained-glass windows. If you are up to the challenge of climbing 768 steps to the spire, you will be rewarded with an unbeatable view over the entire city and beyond. 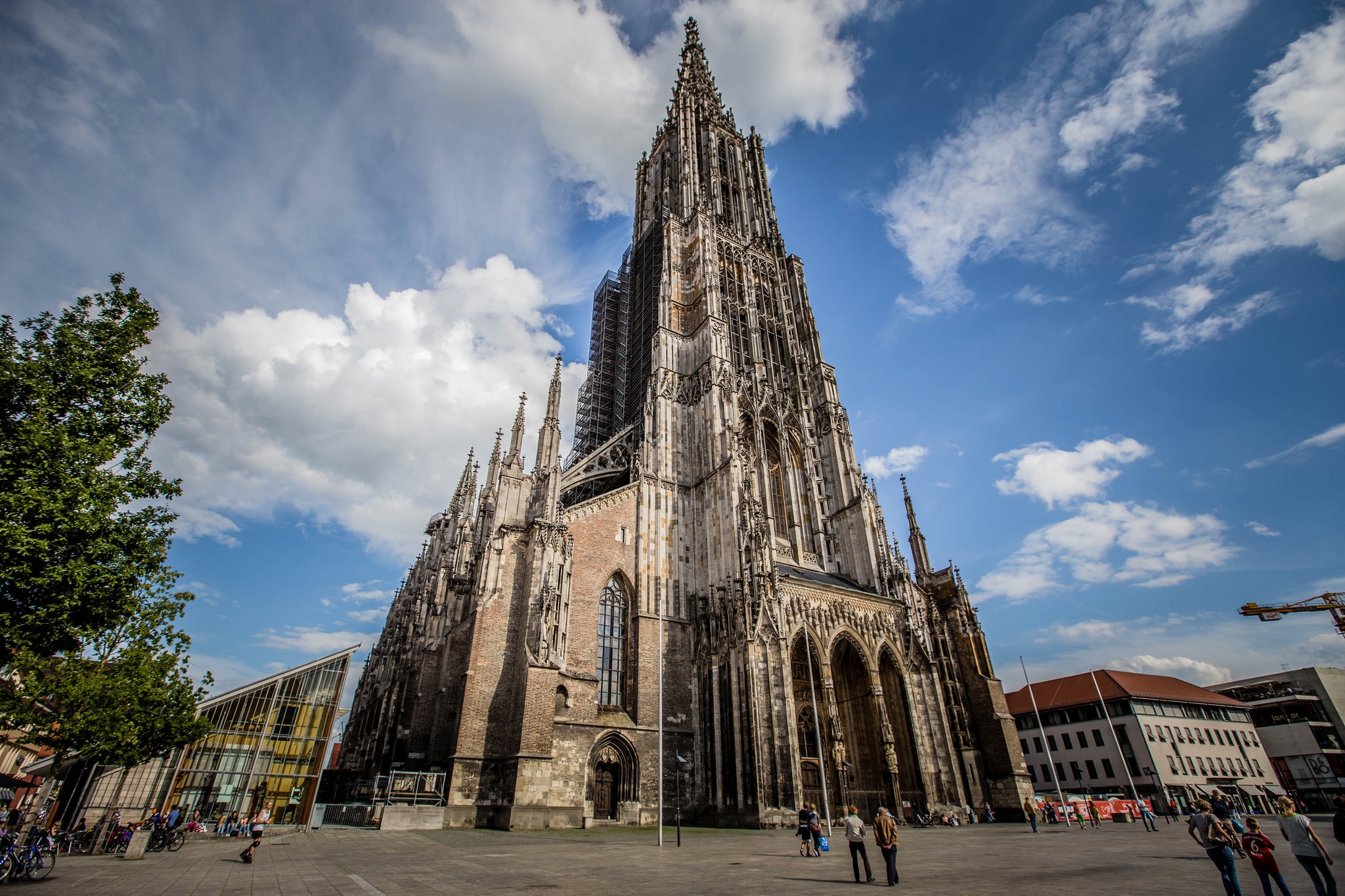 Building, Church
Wieskirche | © ADD / Pixabay
One of the most popular stops along Germany’s famed Romantic Road, the lovely oval Pilgrimage Church of Wies (Wieskirche), sits at the feet of the imposing Bavarian Alps. This church, with rather simple architecture, shot into fame with the discovery of tears on the eyes of a wooden sculpture of the Scourged Saviour in 1738. As more and more pilgrims started flocking to the church, with many claiming to have had their wishes granted and diseases cured by praying here, the church was considerably expanded and beautiful frescoes, stucco work, and murals added to further enhance the attraction of the site.
More Info
Open In Google Maps
12 Wies, Wies Steingaden, Bayern, 86989, Germany
+498862932930
Visit website

Church of Our Blessed Lady, Munich

Cathedral, Church
Frauenkirche, Munich | © 12019 / Pixabay
Book Now
The Church of Our Blessed Lady (Frauenkirche)with its unique saddleback roof defines the silhouette of the bustling city of Munich and can be spotted from miles away. This simple, elegant church was built out of reddish brick in Gothic style in the 12th century. As with most architecture in the country, it suffered heavy damage during the WWII, and its reconstruction was complete by the end of the 20th century. Once inside, visitors are enamored by precious artwork, stained-glass windows, sculptures, and ten famous bells known for their beautiful resonance.
More Info
Open In Google Maps
12 Frauenplatz, Altstadt-Lehel München, Bayern, 80331, Germany
+49892900820
Visit website

Cathedral, Church
Aachen Cathedral is one of the oldest churches in Germany and was the very first landmark in the country to be bestowed with the status of a UNESCO World Heritage Center. Aachen Cathedral is not just a visually pleasing piece of architecture, but has immense historical and religious importance. Built by Charlemagne around 805 AD as the nucleus of his kingdom, Aachen Cathedral has seen the coronation of emperors for over six centuries; it is also the resting place of Charlemagne himself. The treasure trove, including priceless sculptures and artworks, preserved within the cathedral’s walls has few rivals in Europe.
More Info
Open In Google Maps
Aachen, Nordrhein-Westfalen, 52062, Germany
+49241477090
Visit website

The immense and strikingly ornate dome of the Berlin Cathedral (Berliner Dom), topped with a lantern and four domed towers flanking it, is an iconic landmark of Berlin‘s skyline. The architecture of this cathedral is an unbeatable harmony of Italian High Renaissance and Baroque styles. The octagonal interior is jaw-dropping in its grandeur. You can spend hours admiring the marble and onyx altar, striking mosaic work, intricate sculptures, the marble baptismal font, and the painting of the Descent of the Holy Spirit. 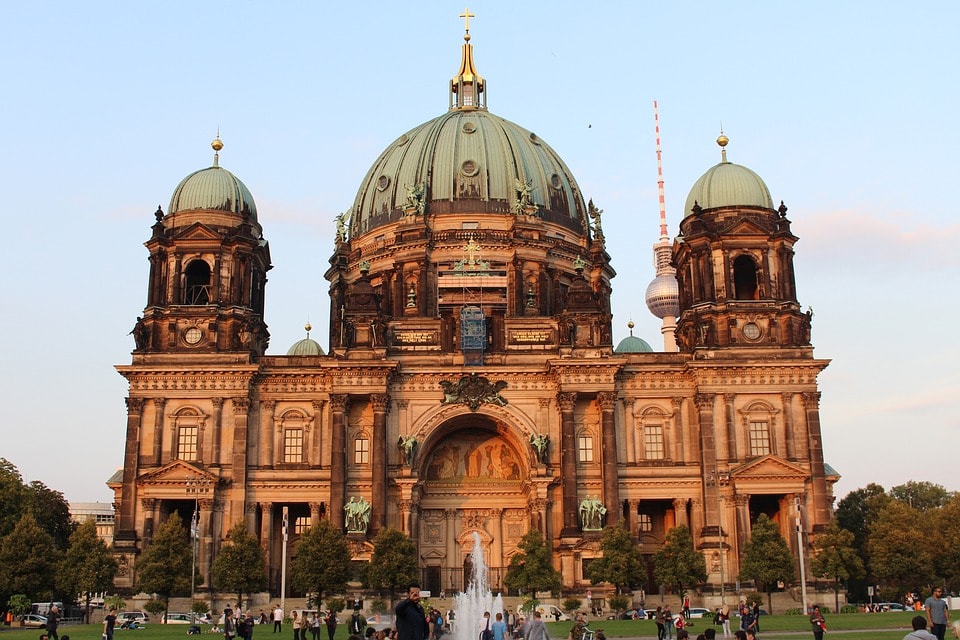 The spectacular six-towered Mainz Cathedral towers over the city of Mainz on the banks of the River Rhine. This 1000-year-old cathedral is unanimously regarded by architecture enthusiasts to be one of the finest examples of Romanesque architecture in the country. The walls of the cathedral protect tombs of princes and archbishops who enjoyed tremendous power and influence during their reign. If you wish to learn more about the history of the cathedral and its social, political and religious influence on the city, head to the cathedral museum. 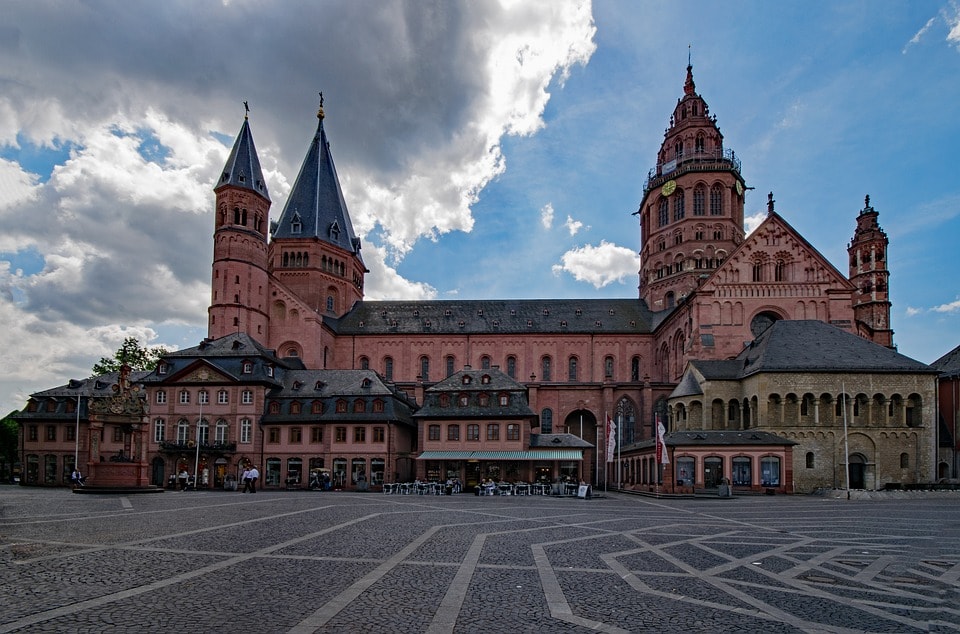