Berlin by Bike: Exploring the German Capital on Two Wheels 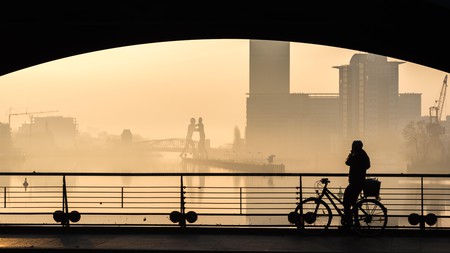 Berlin is one of the world’s most bike-friendly cities. With plentiful cycle paths and opportunities for bike rental, it’s easy to explore the German capital on two wheels.

Berlin has a rich, turbulent history and a vibrant cultural scene – every corner has a story to tell. As extensive and user-friendly as Berlin’s public transport network is, the best way to experience Berlin at close range is by bike. The German capital takes cycling seriously, and ample bike paths away from the road make it easy for even novice riders to get around. With cheap bike rentals available throughout the city, there’s no need to step foot on the U-Bahn. If you only have one day to explore Berlin by bike, this cycle itinerary takes in impressive landmarks and hidden gems, from the East Side Gallery and Tiergarten to secret spots to enjoy some pan-Asian cuisine.

Hiring a bike in Berlin has never been easier. Deezer Nextbike is a public bike-sharing service in Berlin. All new users need to do is set up an account and find one of the 5,000 bikes available in the city using the app. The first 30 minutes are free; it’s €1.50 after that, and the maximum you’ll pay is €15 for 24 hours. 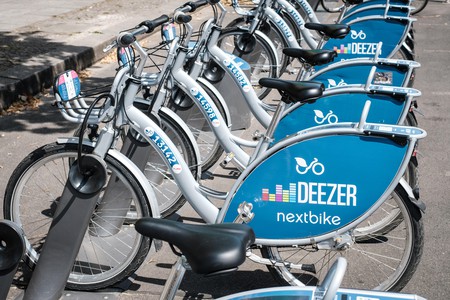 A low-tech but equally effective option is to seek out a cheap bike rental from one of the many kiosks and Spätis (off-licence stores) on street corners. Alternatively, Rent a Bike 44 in Neukolln costs €5 per day, M’eierrad in Kreuzberg costs €4 and Berlin-City-Tours in Prenzlauer Berg charge €8 per day.

Start the day right with a good breakfast

Begin right in the centre of Berlin at Steel Vintage Bikes Café. This bike shop-cum-café serves hearty, healthy food that will set you up for a day of cycling. Top picks include the granola coconut muesli or scrambled eggs and maple bacon, washed down with a frothy cappuccino.

Once you’re sufficiently fuelled, cycle a few blocks to one of Berlin’s most famous landmarks – the Memorial to the Murdered Jews of Europe (Cora-Berliner-Straße 1). Famed not only for its aesthetic but also for the feeling of discombobulation and isolation it evokes, this memorial to the Jewish victims of the Holocaust is made up of more than 2,700 grey concrete slabs of varying heights. Lock up your bike and wander through the thin, criss-crossing paths that traverse the memorial, which was designed by American architect Peter Eisenman and British engineering consultancy Buro Happold. 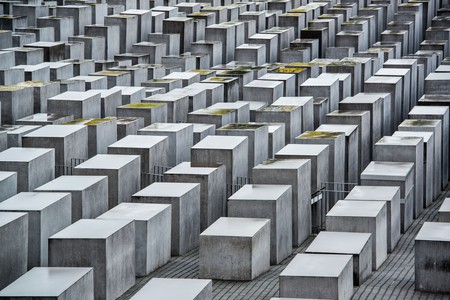 Next, cycle a few hundred metres to the Brandenburg Gate. Built in 1788, this Neoclassical monument became a symbol of Berlin’s division during the Cold War thanks to its location in no man’s land between East and West Berlin, but has now come to represent peace and unity.

Glide through the greenery of Tiergarten

Hop back on your bike and cycle through the beautiful Tiergarten, central Berlin’s vast urban park. Here you can marvel at the postwar Modernist architecture of the Haus der Kulturen der Welt contemporary arts centre, check out the impressive central victory column – opened in 1873 to commemorate the Prussian victory in the Danish–Prussian War – and spy the Beethoven-Haydn-Mozart Memorial. The enchanting Teehaus im Englischen Garten (‘English Garden Tea House’) provides an idyllic spot for a cup of coffee or tea and a generous slice of cake. This thatched cottage sits in the centre of the English Garden, besides a serene pond and surrounded by colourful flower beds. 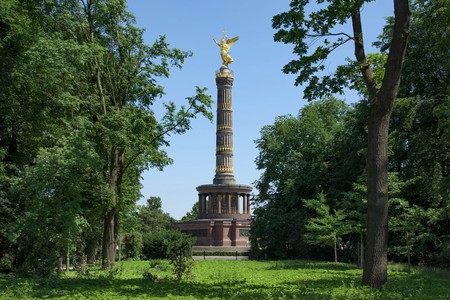 Soak up some culture at the Jewish Museum

Cycle back through Tiergarten to Potsdamer Platz and down Stresemannstraße to the Jewish Museum. The €8 entry ticket is well worth it: the museum’s innovative displays take visitors through the rich history of Jewish life in Germany, while the Daniel Libeskind-designed building also has a story to tell. The architect plotted the addresses of prominent Jewish and German citizens on a map of pre-war Berlin, joining the points on the map to create the geometry and shape of the building. 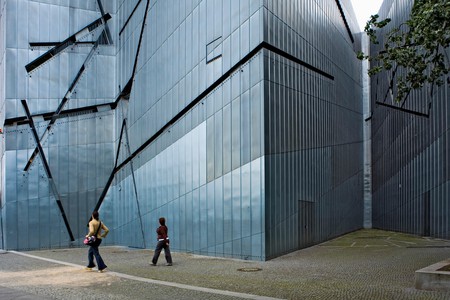 For sandwiches just as delicious as those from the famous Mustafa’s Gemüse Kebab, but without the inevitably enormous queues, head along Oranienstraße to Sahara Imbiss at Eisenbahnstraße 44. Along with Sudanese specialties like kofta (meatballs) and lentil soups, Sahara Imbiss serves a particularly delicious falafel and halloumi sandwich, which comes with a fresh salad and a homemade peanut sauce. With everything under €5, lunch at Sahara Imbiss is a steal.

Admire the East Side Gallery

Make a quick hop over the Spree via the Schilling Bridge, past the Yaam nightclub and along the East Side Gallery – the longest remaining segment of the Berlin Wall, which is now adorned with murals. Drink in the art without getting off your bike – looking out for the famous Fraternal Kiss artwork – and continue straight ahead until crossing over the Elsen Bridge to Treptower Park. This beautiful green space offers canoe rides, stand-up paddleboarding and plentiful ping-pong tables, but is most famous for its Soviet War Memorial. The largest Soviet war memorial outside of the former Soviet Union, this mammoth commemorative complex is also the resting place of roughly 7,000 Red Army soldiers. 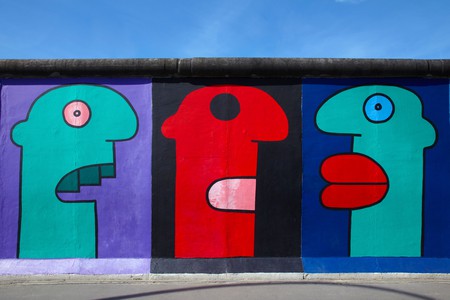 Cycle around a former airport

A short cycle southwest brings you to Tempelhofer Feld. Formerly a military airport and the site of the Berlin airlift (Operation Vittles), when food and essential supplies were brought in by plane during the Berlin Blockade of 1948–49, Tempelhof at this time also became famous as the location of Operation Little Vittles, which saw American pilots drop candy to German children.

Tempelhof ended its life as an aviation hub in 2008, giving way to a vast recreation area; visitors can now bike the six-kilometre (four-mile) cycling trail, rollerblade along the former runways and marvel at the colossal hangars. 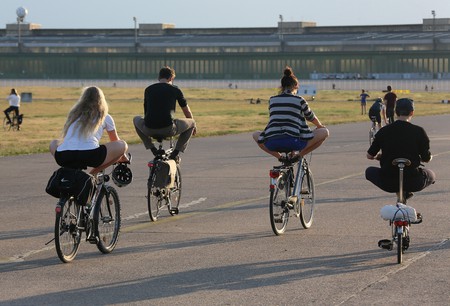 Head over to Viktoriapark, one of Berlin’s most beautiful green spaces and just a 10-minute cycle northwest from Tempelhof. Park up your bike, drink in the beauty of the mountain waterfall and head up the winding paths, through the flowerbeds and up to the top of the park where you’ll be able to look out over the entirety of Berlin. 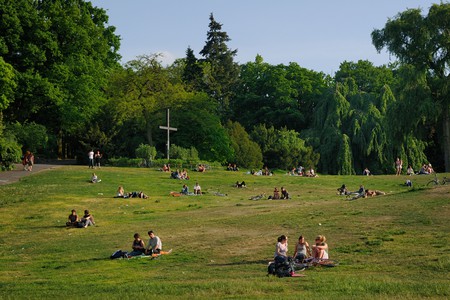 Make the most of happy hour

It’s time to head to one of the best cocktail bars in Berlin. Just a short cycle away from Viktoriapark is Limonadier at Nostitzstraße 12. This cocktail bar is 1920s-themed and boasts a daily happy hour from 7pm to 10pm. Try concoctions like Hemingway’s Darling, a tantalising combination of white rum, mandarin liqueur, lemon juice and homemade bilberry syrup.

Fill up on pan-Asian fusion cuisine

Drinking and cycling is rarely a good mix, so thankfully dinner is just a five-minute walk away. Umami (Bergmannstraße 97) serves up Asian fusion: feast on crispy duck, baked salmon, pan-fried beef and tofu noodles as a well-earned reward for a long day of cycling, paired with a refreshing mango lassi. There may be a queue, but it moves quickly and the food is always worth the wait. 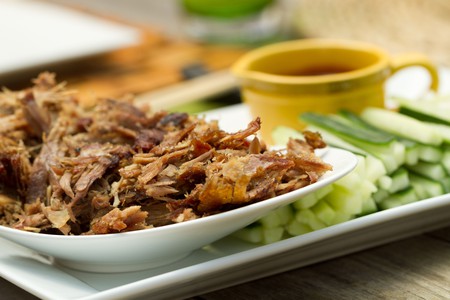